Mourners included the Fort Worth mayor and more than two dozen uniformed Fort Worth police officers attending the service to pay their respects. 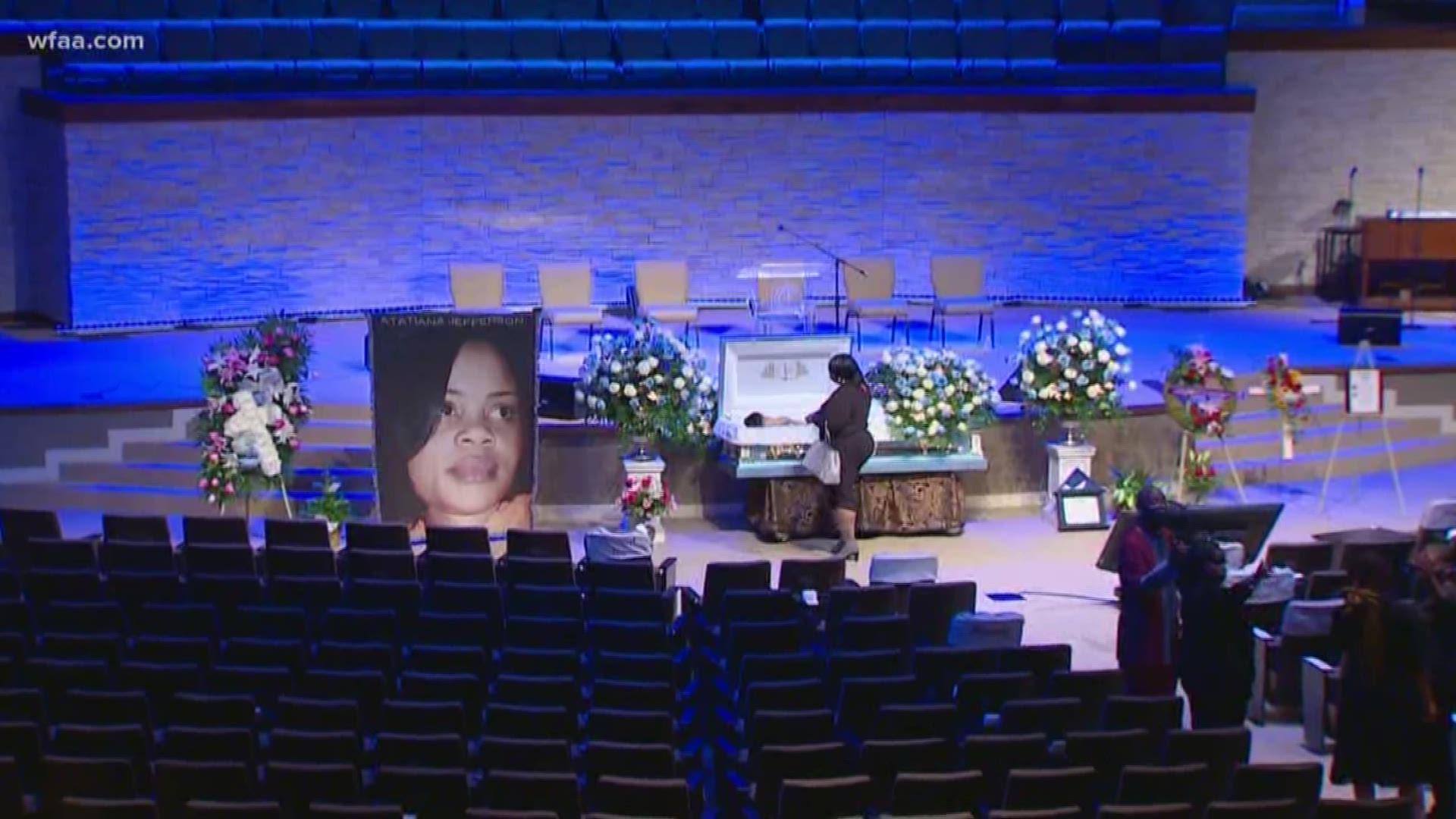 DALLAS — Nearly two weeks after her death, Atatiana Jefferson was finally laid to rest in an emotional funeral service that both celebrated her life and renewed the outcry for justice.

Jefferson was shot by a Fort Worth police officer, and her death prompted protests.

Aaron Dean resigned from the Fort Worth Police Department before he could be fired in connection with the shooting and was arrested on a murder charge.

On Thursday, Jefferson's family gathered at Concord Church in South Oak Cliff. This was after a one-week delay in a family dispute regarding when and where services would be held.

Fort Worth Mayor Betsy Price and other city leaders attended along with more than two dozen uniformed Fort Worth police officers also there to pay their respects.

Concord Church Pastor Bryan Carter said the morning service would focus on Atatiana's life and what she meant to her family.

But justice was also an ever-present theme in the service.

"This is a long process. The family has been through a lot," Carter said. "We're just praying that this service today is a place of healing, a place of hope as they begin this long journey towards justice."

Jefferson's family did not want the service recorded or broadcast but invited the general public to attend and allowed news cameras to show the inside of the church prior to the service.

Her body was dressed in a gold dress inside a light blue casket. Some of her family members wept inconsolably before the casket was closed while the service began.

Jefferson was killed on Oct. 12 at her Fort Worth home.

A neighbor, concerned that her front door appeared to be open after 2 a.m., called a non-emergency Fort Worth police number to have an officer check on the house.

Two officers parked around the corner from the house, approached on foot and in a search captured on a police body camera, searched the exterior of the house all the way to the backyard.

The video shows the officer pointing his flashlight into a backyard window then yelling, "Put your hands up, let me see your hands."

Then the officer fires a single bullet through the window into the bedroom, striking Atatiana Jefferson.

Her 8-year-old nephew who was in the bedroom with her told investigators that Jefferson had gone to the window with her own gun in hand to investigate suspicious noises coming from her backyard.

The video does not show the officers ever identifying themselves as police.

In the eulogy, Pastor Carl Ming said they were "tired of crying mothers on TV, tired of gathering for funerals, tired of protests and tired of waiting for body cameras to prove what we already know to be true."

And Representative Maxine Waters sent a resolution to be read at the funeral that said she wanted to respond to the "outrageous injustice of her (Atatiana's) death" and that she is "heartbroken and infuriated that another African American woman is taken from her family."

"I believe that it came about simply because these deaths, untimely deaths, are sending alarms and triggering waves throughout our country. That this is a recurring theme," said Jaime Kowlessar of the Dallas City Temple Seventh Day Adventist Church. "Which is a song we have been singing for quite a long time in our country and in our nation," he said after helping officiate the service.

Atatiana Jefferson was carried to a private burial in a glass-sided hearse: one more chance for the public to see the impact of that night and that encounter in Fort Worth.

Now, her family braces for the long journey to justice that they pray will come next.