The grand jury "found no probable cause exists to charge any person with a criminal offense related to the death of Mr. Scott," the news release said. 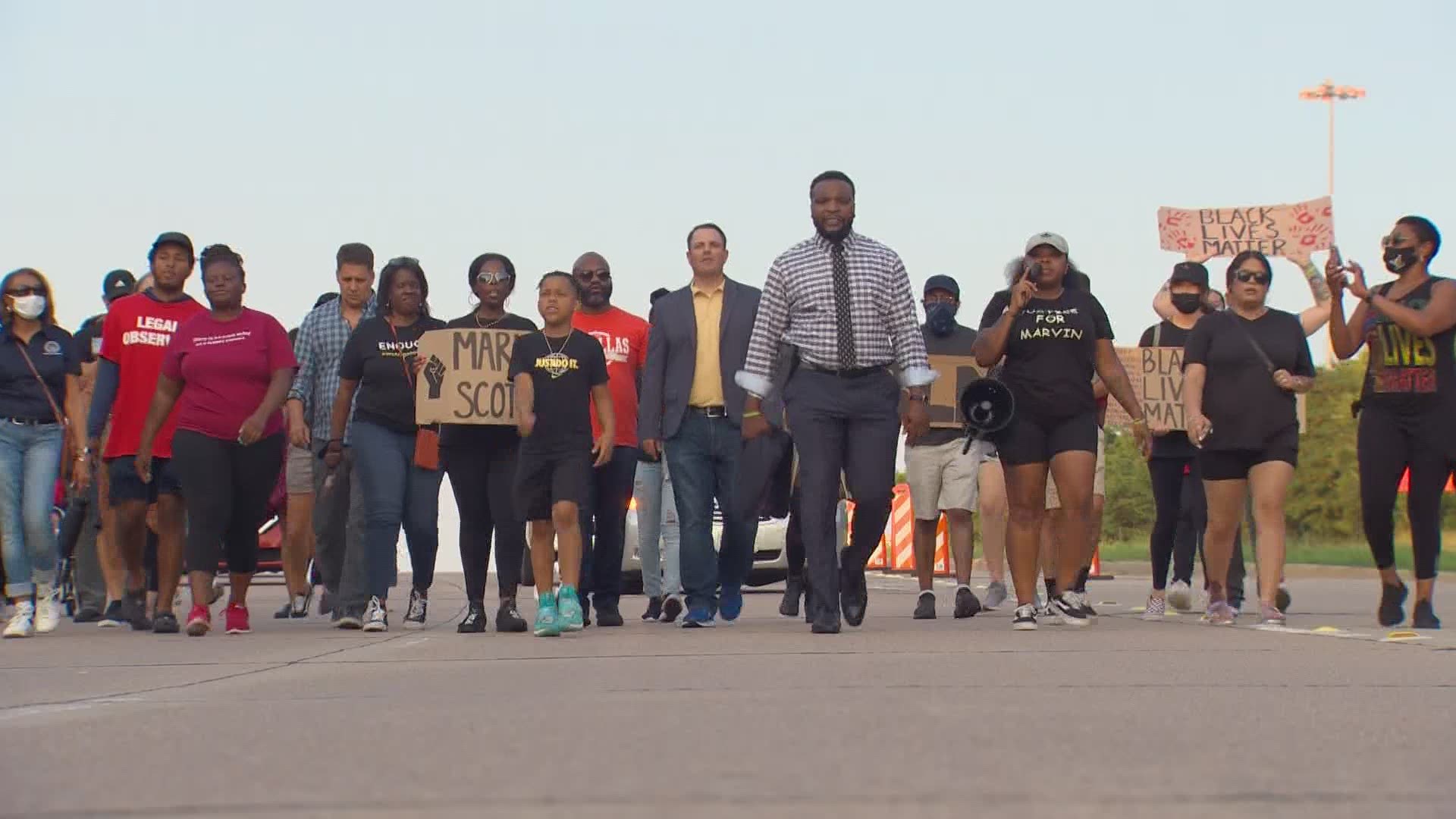 COLLIN COUNTY, Texas — A grand jury cleared eight Collin County detention officers involved in the March in-custody death of Marvin Scott of all charges Tuesday, according to a news release from the office of Collin County District Attorney Greg Willis.

The grand jury no-billed the eight officers, meaning they are cleared of any criminal charges and won't be charged with any state criminal offense going forward.

The grand jury "found no probable cause exists to charge any person with a criminal offense related to the death of Mr. Scott," the news release said.

"This case is a tragedy for all involved, first and foremost for the family and friends of Mr. Scott. For a parent to lose a child, including an adult child, is a loss that's profound, permanent and unfixable. I ask everyone to join me in sending the Scott family prayers of comfort, solace, and strength," Willis wrote.

Sheriff Jim Skinner fired seven officers following the incident and an eighth resigned, but one officer was reinstated in April after he appealed the firing.

The Collin County Medical Examiner report stated that Scott's death was the result of a "fatal acute stress response in an individual with previously diagnosed schizophrenia during restraint struggle with law enforcement."

"I too share the Grand Jury's concern for the treatment of individuals suffering from mental illness, and I pledge to honor Mr. Scott by taking the lead in assembling a working group to look for lessons learned so that his tragic in-custody death will not have been in vain," Willis wrote in the news release.

Both Willis and the grand jury asked for peace after Tuesday's verdict.

"I know there are members of our community who have strong feelings about this case and the grand Jury's decision," Willis wrote. "To everyone in Collin County, I say please be respectful of each other's dignity, and please be respectful of our laws. We all have a God-given right to peaceably assemble and be heard, but remember that our laws must be followed and they will be enforced."

Zack Horn, the attorney for the eight officers, released the following statement Tuesday:

"We are thankful that the Collin County Grand Jury put in the time and effort to evaluate this case on facts, evidence and the law instead of Twitter hashtags and Facebook gossip.

"Our clients followed every one of Jim Skinner's policies and procedures on March 14, 2021. Skinner's rush to fire our clients was nothing more than a frightened politician sacrificing the livelihoods of dedicated public servants for political expediency.

"Stakeholders all around Collin County are beginning to learn what many current and past Collin County Sheriff's Office insiders already know: Jim Skinner is all hat and no cattle.

"We now look forward to turning our attention to seeking reinstatement for those clients interested in returning to public service."

Later Tuesday night, protestors marched to the Collin County jail in support of Scott and his family.

Protestors are gathered in the Collin County Courthouse parking lot following the news that none of the jail employees will be charged in #MarvinScottIII death. pic.twitter.com/EfqnX46bBe

Family attorney Lee Merritt said at the protest that he is preparing to take the case to a federal grand jury.

"Injustice is simply not an option, so we are preparing for now a federal grand jury...While the state of Texas should provide proper protections, they have repeatedly showed us that they don’t."

The group is now moving to the Collin County Jail, where Scott died.

The woman on the megaphone is Marvin Scott III’s sister. pic.twitter.com/jtpWdOZO9n

On March 14, Scott died in custody at the Collin County jail.

The Collin County Medical Examiner called Scott's death a homicide, in a release on April 28.

Dr. William Rohr said Scott's cause of death was "fatal acute stress response in an individual with previously diagnosed schizophrenia during restraint struggle with law enforcement," the release said.

The video from inside the jail has not been released publicly.

Skinner sent letters on March 25 to the Texas Rangers and criminal district attorney that said he wanted to release the video, but asked if releasing it would interfere with the investigation or possible prosecution, according to documents released by Skinner's office.

Seven detention officers were fired following the incident and an eighth officer who was under investigation resigned.

But on April 27, a Collin County detention officer was reinstated after successfully appealing their termination.

Scott was taken into custody on March 14 by Allen police, who said he was arrested for alleged possession of marijuana under 2 ounces, which is a class B misdemeanor.

The incident started with security personnel at the Allen Outlet Mall alerting Allen police to Scott in the parking lot. Merritt said police were initially called because of the suspected smell of marijuana.

Paramedics took Scott to a hospital first because police thought he had taken drugs and said he was acting in an erratic manner. He spent three hours there before he was taken to jail.

Scott was transported to the Collin County Detention Facility around 6 p.m. that day.

"There are protocols with people with mental health issues when officers are aware, they are supposed to follow, and that did not happen here, resulting in an unnecessary death,” Merritt said.

The Texas Rangers led the investigation. The agency did not release any videos or comment on the case.