Several others face prison time in the scheme, which bankrupted the Dallas County Schools bus agency. 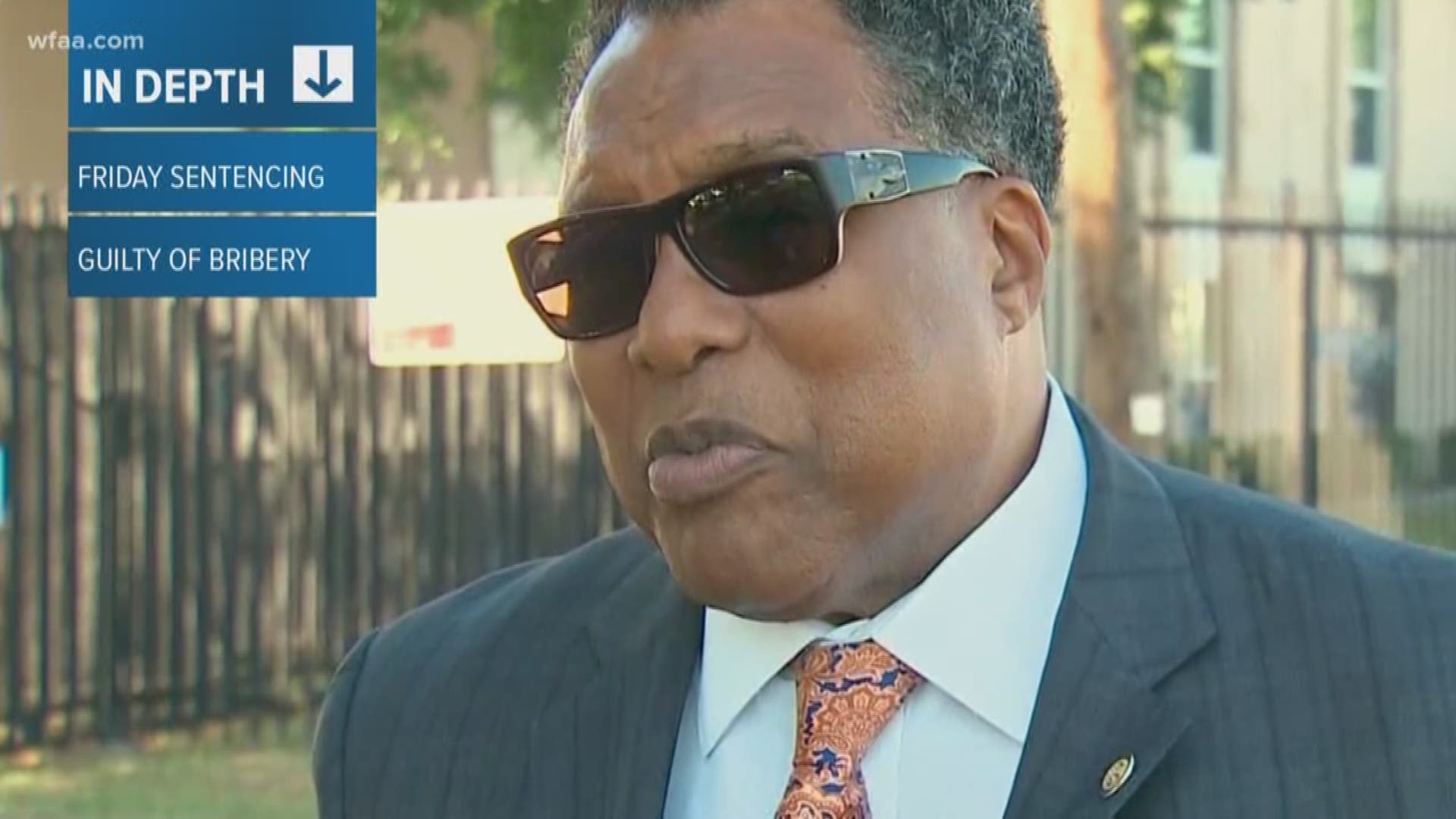 Caraway, who turns 67 at the end of this month, appeared Friday before Chief U.S. District Judge Barbara Lynn, who could have sentenced him up to seven years in federal prison.

Lynn ordered Caraway to begin serving his sentence on May 5.

Federal judges typically allow non-violent criminals who are not a flight risk to report to prison months later, after they have their affairs in order.

RELATED: What he did for the money: Watch Dwaine Caraway’s 2015 speech motivated by bribes

Caraway voted for the program on Dallas City Council, and publicly extolled its virtues to his council colleagues.

The program, though, ultimately wasted tens of millions in public money, prosecutors say. It bankrupted Dallas County Schools, a taxpayer-supported governmental entity that was shut down over the boondoggle.

Behind the scenes, according to prosecutors, Caraway got paid by Leonard, directly and indirectly. Here’s some of what he got:

• security cameras for his Dallas home

• a fake loan for his father’s home, and funeral expenses when his father died

• casino chips and gambling money for the horse track

• $45,000 in “campaign contributions” directly and indirectly

RELATED: These are the complex bribes that took down Caraway, gutted Dallas County Schools

Court documents say that much of the money was paid to Caraway through a company called ELF Investments, owned by Slater Swartwood Sr., another New Orleans businessman, and close associate of Leonard.

Between 2013 and 2015, Caraway wrote on his annual city financial disclosure forms that he was taking money from ELF Investments. Although council members are required to fill the forms out every year, no one at the city is tasked with actually reading them.

Prosecutors say in addition to taking bribes, Caraway skipped out on paying nearly $70,000 in taxes on that extra income.

In February, his name surfaced, indirectly, in a federal case involving another Dallas City Council member embroiled in a corruption scheme, Carolyn Davis. She pleaded guilty to taking bribes from developer Ruel Hamilton in exchange for supporting his housing projects.

Hamilton has pleaded not guilty and denies all wrongdoing.

But in his indictment, prosecutors say he not only paid bribes to Davis, but someone else known as “Council Person A,” whom prosecutors say left office Aug. 9, 2018. That’s the day Caraway pleaded guilty.

According to the indictment against him, Hamilton allegedly paid “Council Person A” a $7,000 bribe Aug. 3 – six days before Caraway pleaded guilty. The indictment says that Hamilton wanted Davis and “Council Person A” to lobby for his projects before the Texas Department of Housing and Community Affairs, which approves low-income housing projects.

On Thursday, prosecutors finally named Caraway in that investigation, writing in a motion to Judge Lynn that Caraway is “a key witness against Ruel Hamilton.” Prosecutors sought to have Caraway’s Friday sentencing date pushed back until after Hamilton’s trial, expected later this year, so that the judge could take Caraway’s cooperation into account in deciding his sentence.

Judge Lynn denied prosecutors’ request to further postpone Caraway’s sentence, which has already been reset several times. She wrote that she assumes Caraway will cooperate fully in the Davis-Hamilton investigation, and that prosecutors can petition to have Caraway’s sentence lowered after that case is concluded if they so desire.

Judge Lynn is used to handling high-profile corruption cases. She sentenced another former Dallas mayor pro tem, Don Hill, to 18 years after his 2009 jury trial conviction for taking bribes from low-income housing developers. When Hill got cancer in 2017, she granted him early release. He died the next day. He was 65.

Watch: The major players in the Caraway corruption plea:

April 9 – Larry Duncan, former president of Dallas County Schools board, and former Dallas City Council member, faces up to a year in prison for taking $245,000 from Bob Leonard Jr. in “campaign contributions,” and using most of the money for auto expenses, cash withdrawals, and spending money for him and his wife.

May 15 – Bob Leonard Jr., of New Orleans, faces up to 10 years in prison for paying millions of dollars in bribes to Dwaine Caraway, Ricky Sorrells and Larry Duncan to advance his company Force Multiplier Solutions’ school bus stop-arm camera business.

Aug. 7 – Ricky Sorrells, former superintendent of Dallas County Schools, faces up to 10 years in prison for admitting to taking more than $3 million in bribes from Leonard in exchange for helping expand his stop-arm camera business across North Texas and throughout the state. Part of that money, $800,000, was paid through a law firm to Sorrells, and another $200,000 went toward Sorrells credit card and student loan debts.

NOTE: There is no sentencing date set for Slater Swartwood Sr., who faces up to five years in prison for admitting to using his companies ELF Investments, Cambridge Realty Group LLC and Anrock Rrealty Services LLC to funnel $2 million of Bob Leonard’s bribe money to Caraway and others.