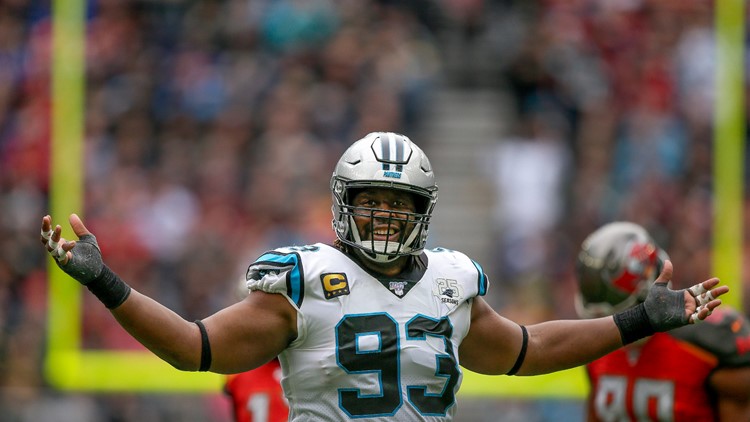 DALLAS — The NFL offseason is now in hyperdrive with free agency in full swing and the trade market heating up as well. While it feels like every team is making big additions, and the Dallas Cowboys are sitting idly by, the team has made a flurry of smart, smaller moves.

The calculated pace in free agency is by design as Dallas’ model is to re-sign their talented young players and fill holes on the roster with second and third-tier free agents.

Heading into free agency, the Cowboys had a few major holes. With the loss of Byron Jones to the Miami Dolphins, Dallas counted cornerback, defensive tackle, defensive end, safety, and wide receiver among their biggest needs. Add in the gulf between them and the rest of the league in special teams production and you could see that Dallas had work to do.

Here’s a look at how the Cowboys have opted to address their needs so far:

When the Joneses decided they weren’t going to pay the price for Byron Jones, the need at corner got fast-tracked. The team responded by signing former Baltimore Ravens and New York Jets CB Maurice Canady. The deal for the 25-year-old came at a modest cost of $1.25 million for a season.

Canady is not a household name, but he played well in 2019, according to Pro Football Focus, and he can help on special teams, as well.

The Cowboys also brought back Anthony Brown on a three-year deal worth $15.5 million to further assert their plan. Brown has played well for the team as a slot corner since being drafted in 2016, but he also missed half of last season with a torn triceps.

Canady and Brown don’t equal Jones, but the CB position always needs depth and solid players, which both provide. Cornerback could be a big focus in April’s draft for Dallas.

The Cowboys have been missing great play from the defensive tackle spot in recent seasons. After losing Maliek Collins during the mass exodus of former Cowboys players to the Raiders this offseason, the team countered by adding former All-Pro Gerald McCoy.

McCoy – the third overall pick out of Oklahoma in 2010 – is still playing at a high level and has had at least five sacks in eight straight seasons. With a cost of just north of $20 million for three seasons, the Cowboys have hit a home run with this deal to give themselves a brawler up the middle.

Dallas still needs more help at the position but McCoy was a good first step to fixing the interior of the defensive line.

The team re-signed Darian Thompson for two years at $2.5 million. Thompson is a core special teams player and provides depth at the safety position. After seeing the departure of Jeff Heath to Las Vegas, Dallas reunited free agent Ha Ha Clinton-Dix with his old coach Mike McCarthy by signing the veteran to a one-year deal worth $4 million.

Dallas will probably continue to look for more depth at this position, possibly in the draft.

Re-signing Amari Cooper was a must and the Cowboys got it done after allowing him to flirt with division rival Washington, among other teams. Dak Prescott seemed to unlock his potential as a passing quarterback nearly the moment Cooper arrived so Dallas couldn’t afford to let the four-time Pro Bowler go.

Cooper’s partnership with Dallas comes at a five-year, $100 million dollar deal. The contract includes an opt-out for the Cowboys after the second season, which gives Dallas flexibility. The extension turned out to be even more necessary after Randall Cobb left for big money with the Houston Texans.

The Cowboys are still in the market for another WR, but, if they don’t find one, the draft has plenty of options with one of the most stacked classes at the position in recent memory.

Emerging TE Blake Jarwin signed a three-year extension worth $22 million to stay with the Cowboys and it could look like a bargain if he emerges from Jason Witten’s shadow. Future Hall of Famer Witten signed with the Raiders, leaving Dallas after 16 seasons of wearing the star on his helmet.

No one can truly replace Witten from his peak years but the team is now paying Jarwin like a starter. The Cowboys will be counting on a breakout season from the former Oklahoma State Cowboy after years of grooming him to become Witten’s successor.

Dallas has Dalton Schultz backing up Jarwin but they could be interested in more depth at the position now that they’re fully on the other side of Witten’s distinguished tenure.

The Cowboys brought back Sean Lee on a team-friendly deal, worth up to $4.5 million for a year. Lee adds insurance at a position where the team would’ve been quite thin if he had left.

In addition to Lee, Dallas also retained special teams mavens and linebacking depth by re-signing Joe Thomas – who Mike McCarthy coached in Green Bay – and Justin March. The band is back together at LB.

Dallas released flexible swing tackle Cameron Fleming and lost guard Xavier Su’a-Filo to the Cincinnati Bengals. However, the Cowboys were able to bring back Joe Looney to continue to be their interior safety blanket and Ezekiel Elliott look-alike.

Looney’s ability to play guard helps, but it’s his work as a backup center that made his retention a key move.

With Fleming out of the picture, don’t be surprised to see Dallas either draft or sign a tackle to provide insurance for Tyron Smith.

The signing of Canady and the reunion with Thompson will help the coverage special teams. Dallas will miss Heath in this department, however.

On the kicking side of things, the Cowboys re-upped with placekicker Kai Forbath and long snapper extraordinaire L.P. Ladouceur for continuity. Forbath was perfect on his kicks after being brought to Dallas after Brett Maher was mercifully let go late in the 2019 season.

Ladouceur has been Mr. Perfect on snaps for 16 years in Dallas. His re-signing might not seem significant but he’s the best in the business and removes the worry of perpetually finding someone who can do the job and eliminates the doubt that can creep in with a poor snap or two.

Dallas still needs to consider an upgrade at punter with Chris Jones producing the worst net yardage on punts in the league in 2019.

There are quality players available, but Dallas hasn’t addressed this position yet and have seen 2019 standout Robert Quinn vacate to the Chicago Bears. Jadeveon Clowney, Everson Griffen, and now newly released Clay Matthews are all options.

The Cowboys need help at edge rusher before the draft and they could still look to bolster the position once April rolls around.

In total, the Cowboys have signed/re-signed 12 players early in free agency. That’s not exactly ‘sitting out of free agency’ like many fans on social media would have you believe. The Cowboys may not have made the big moves that every fan clamors for, but they are doing what they feel is best for them by staying the course under their plan.

How do you think the Cowboys are shaping up during free agency so far? Share your thoughts with Ben on Twitter @BenGrimaldi.