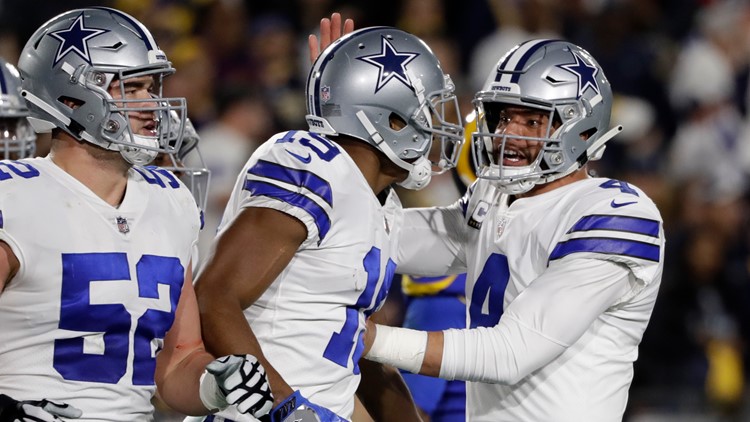 The Dallas Cowboys had it all in front of them at this time last year. They had the players that they wanted to re-sign, the players who had shown themselves to be among the best at their position, and the majority of their previous salary cap dead money was coming off the books.

Gone were the remnants of the Tony Romo and Dez Bryant deals. Salary cap space was coming for the Cowboys and it was coming at a perfect time. For years, Stephen Jones had preached about not using free agency to overpay and now it was all coming to fruition. The vision was clear. The plan was in place. Dallas was about to reinvest in its future.

Here is a laundry list of players who were in a position to secure long-term success – and long term deals – with the team: DE DeMarcus Lawrence, RB Ezekiel Elliott, WR Amari Cooper, CB Byron Jones and, of course, QB Dak Prescott. Both Jerry and Stephen Jones said the right things about all of these people being important to the team.

We were told about how they wanted their homegrown studs to remain with the Cowboys and about how using cap space to bring back your own talent was the way to go. From that group, only Lawrence and Elliott got paid last offseason, leaving the franchise quarterback, stud receiver and Pro Bowl cornerback working on old, expiring deals in 2019.

Still, heading into this week, there was hope that at least two from the unsigned group would re-up with the Cowboys. Dallas even had around $74 million in cap space to make it work. The organization tempted fate with Prescott and Cooper, but in the end, both will remain with the Cowboys. Jones, as anticipated, signed a mega deal elsewhere when he landed with the Miami Dolphins.

Even with the quarterback and wideout still in the fold, it’s probably not what everyone wanted as Prescott got the exclusive franchise tag to keep him with the team for at least 2020. The hope now is that the tag is just a placeholder while the two sides continue to hammer out a deal that will keep Dak in Dallas for the foreseeable future. The length of the deal, not money, appears to be the holdup. Prescott wants four years and the team wants five.

The stance is understandable from both sides. Prescott wants a chance to cash in again before he retires and the Cowboys would like a fifth year of guaranteed QB play for their considerable money.

What is tougher to decipher is why the team is willing to compromise their future, and present, over a year of service. If Prescott is the player that the front office thinks he is, then they should have no problem agreeing to four years and seeing where he takes the team. If it works out, he’ll be worth a new deal four years from now. If it doesn’t, the team has an out in a shorter amount of time.

By holding this up over a measly year of service, the team cannot operate with their full amount of salary cap dollars in free agency. Prescott’s franchise tag is taking up around $33 million, but getting a deal done would likely free up some immediate money. That cap space could be used to build around Prescott and improve the overall team.

Prescott’s tag also came so late in the game that it meant the team and Cooper had precious little time to get a deal done to stop him from hitting the open market once the newly ratified collective bargaining agreement prevented the Cowboys from also tagging the Pro Bowl receiver. No deal was reached and Cooper became available as a free agent. That meant Dallas had to fend off other teams for Cooper’s services.

The Cowboys got a little lucky when Cooper flirted with other teams, namely the Washington Redskins, but returned to Dallas on a five-year, $100 million deal, which included $60 million guaranteed. It would have been an awfully rough day for the organization if Cooper left.

The new deal with Cooper is probably for a little more than it would have required if Dallas had taken these steps within the whole year they had to get this done. But the price is the one that had to be paid with Cooper free to sign elsewhere.

It took the organization years to climb out of a place where they weren’t restructuring unfavorable contracts. Through shrewd drafting, patience, and restraint, they were set up to make sure that they could put forth a legitimate effort in free agency and re-sign their best players.

The team broke it down and built it back up to get to this perfect moment where youth, talent, and cap space intertwined. Now that the time to pay people has arrived, delaying their opportunity has the Cowboys paying the piper.

There is still work to be done in getting Prescott re-signed, but by keeping Cooper, Dallas took a step in the right direction. The rest of the offseason will show whether or not they were too late in enacting their plan.

Do you think the Cowboys did well to keep Amari Cooper in the fold while still working on a deal for Dak Prescott? Share your thoughts with Ben on Twitter @BenGrimaldi.