North Texas accounts for around 1/3 of the total cases and deaths in the state. 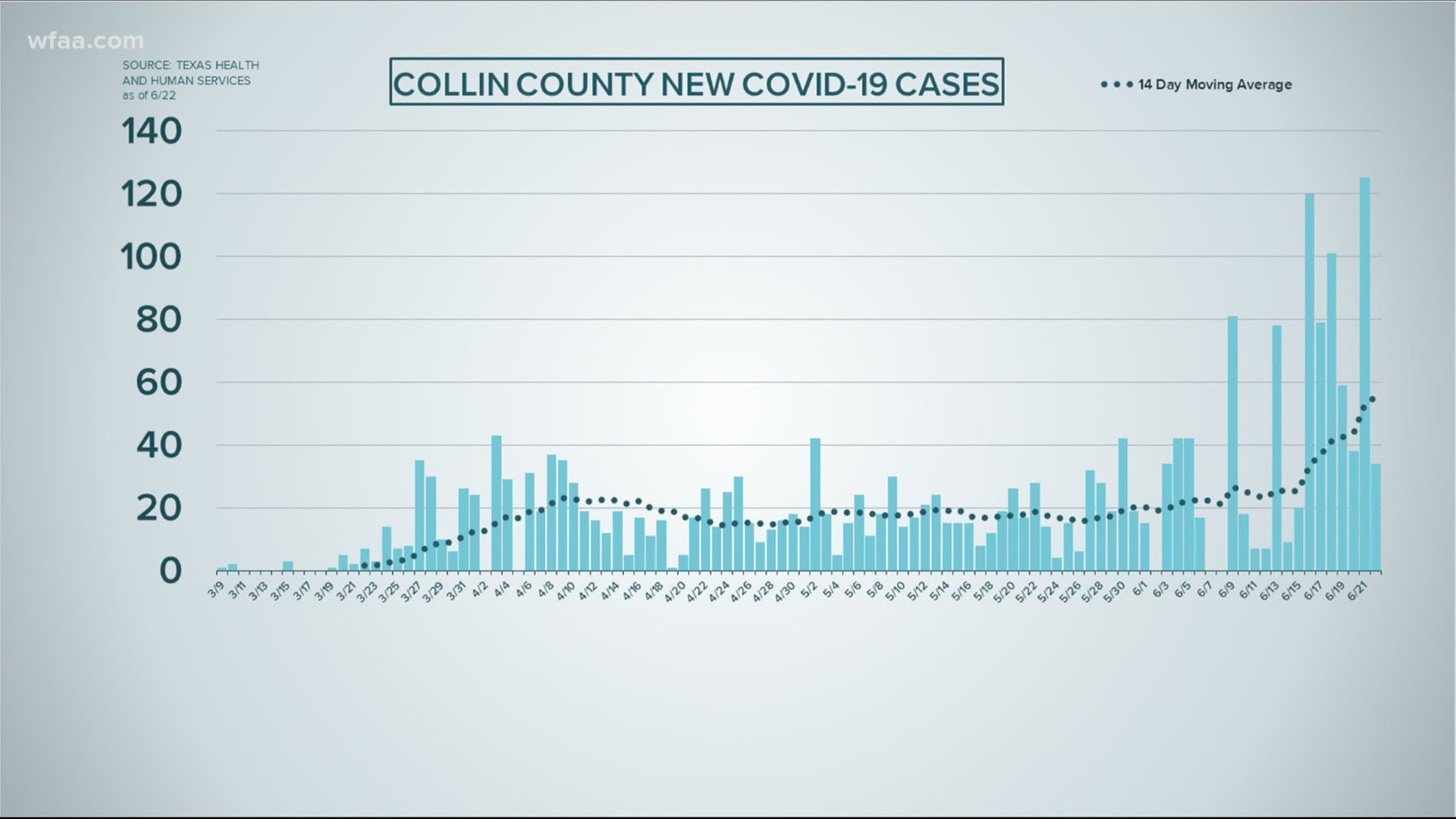 Tarrant County reported a nearly 20% single-day increase in patients hospitalized with COVID-19 on Tuesday. North Texas hit a new high for hospitalizations, reporting more than 1,000 people in hospitals across the region for the first time, according to officials.

While a local hospital leader said people in the Dallas-Fort Worth area should not "panic" about bed availability, the increase in hospitalizations and new cases both locally and across the state during the month of June has been significant.

Over the past week and a half, hospitalizations in the state have broken previous records each day.

Texas is expected to hit a new record high for daily cases again Tuesday, as Gov. Abbott said they expect to surpass 5,000 across the state, per a KBTX-TV interview.

The rise in cases in Texas over the past 13 days has been exponential. June 10 was the first time Texas reported more than 2,000 new cases in a single day.

And on June 20, just a couple days ago, the state reported more than 4,000 cases for the first time.

In Dallas County, there were 445 new cases Tuesday, more than double the number reported on June 1, Judge Clay Jenkins said. There are at least 470 patients hospitalized with COVID-19 in the county, another record-high.

North Texas has now confirmed more than 36,500 cases since testing began with more than 720 deaths.

That means that North Texas currently accounts for around 1/3 of Texas' total COVID-19 cases and 1/3 of all the people who have died in the state.

Late Monday, the largest pediatric hospital in the U.S. announced it was taking adult patients to free up bed space in Houston.

Dr. Anthony Fauci, the nation’s top infectious disease expert, told lawmakers in Washington on Tuesday that “the next couple weeks are going to be critical” in Texas and other states that are trying to curtail an alarming spike in new cases.

The state has had at least 114,000 confirmed cases since tracking began in March, with nearly 2,200 deaths, according to official data.

The Dallas Police Department said Tuesday night that 11 detectives assigned to the evening shift of its robbery and assault response units have tested positive for COVID-19.

Abbott is allowing mayors and county judges to set limits on outdoor gatherings that are more than 100 people in size.

A similar previous order said local leaders could only impose limits on outdoor events with more than 500 people.

There were 111 new cases of the novel coronavirus confirmed in Collin County on Tuesday, according to official data.

This marked on the fifth time the county had reported case numbers in the triple digits.

Since testing began in March, 2,359 people in the county have tested positive and 38 people have died. No new deaths were reported.

This is the second highest single-day total in Denton County, and only the third time they have broken 80 cases.

Johnson and Wise counties are just two of the many rural counties across Texas that will no longer receive COVID-19 case updates from the state, officials said Tuesday morning.

The Texas Department of State Health Services told Johnson County officials they could no longer provide them with case data due to a "high caseload and transfer to a contractor for contact tracing."

Many rural counties in the state have heavily relied on the numbers from the statewide health department to then share that case information with their local residents since tracking began in March. Many of those counties do not have large local health departments.

State health officials said the department is working to get the information "from its contract tracing system at the county level" to continue to provide it to county officials.

In Dallas County, there were 445 new cases Tuesday, more than double the number reported on June 1, Judge Clay Jenkins said. There are at least 470 patients hospitalized with COVID-19 in the county, another record-high.

While the number was not a new record-high, down from Monday's record 454 new cases, Jenkins warned the county was a seeing a "second wave" of cases and described it as a "surge."

"I was hopeful that the State would see fit to make some of the recommendations in the Open Texas document requirements," he said.

Seven more people have died in the county, raising its death toll to at least 324 people since tracking began.

The victims included three people who did not have underlying health conditions: a Dallas man in his 60s who was found dead at home, and two residents of long-term living facilities, one a Dallas woman in her 60s, the other a Mesquite man in his 80s.

Two Irving men, one in his 40s and one in his 50s, and a Dallas man in his 60s each died after having been hospitalized. All three had underlying health conditions, according to county officials.

A Dallas man in his 80s who had been hospitalized also died, officials said.

Officials reported 260 new cases on Tuesday, raising the county total to 9,386 since tracking began in March. The new numbers were a rise after the county saw a dip in reported cases Monday.

One additional death was reported as well, raising the death toll to 211, though officials have not yet released additional detail.

Over 9,386 people have tested positive in the county so far, with almost half having recovered.

As the Dallas County order mandating businesses must require all employees and customers wear masks takes effect, officials in Mesquite are asking anyone who sees businesses failing to follow the order report them to the city's hotline.

RELATED: What you need to know about Dallas County's new face mask requirement

Two COVID-19 testing sites in the city of Dallas, one at Ellis Field House, the other at the American Airlines Center, will run out of federal support on June 30, officials with the city of Dallas said Tuesday.

While the city and Dallas County will contract with a private company to keep two sites open, the site at the American Airlines Center will be permanently closed.

The Ellis Davis Field House site will continue to operate under the city and county, and a new drive-thru testing site will be created at the University of Dallas, officials said.

President Donald Trump said he wants to slow testing across the country on Tuesday as he departed the White House for Arizona, after aides had said he made a comment about slowing down testing as a joke during a weekend rally in Tulsa.

"I don't kid," he said Tuesday when asked about the comment.

Trump had originally told the crowd in Tulsa on Saturday he had directed members of his administration to slow testing.

"I said to my people slow the testing down, please,” the president said at the rally.

There were at least 3,711 people hospitalized with COVID-19 across Texas on Monday afternoon, state officials said, a new record high.

It was the 11th straight day the numbers have risen to new heights across the state.

North Texas saw a record rise as well, increasing up to at least 988 patients in the region. There are currently 415 ICU beds available in the same area, and a local hospital leader said people in the Dallas-Fort Worth area should not "panic" about bed availability.

The news came as Gov. Greg Abbott admonished Texans to be more diligent about practicing social distancing and wearing masks, warning that businesses may have to close down once more if cases continue to spike.

Dallas leaders announced the creation of Dallas Forward on Tuesday, a new effort from the city and private partners to create resources for small to mid-sized businesses in the city.

The program will help business owners access resources like personal protective equipment, grant and loan applications and personalized assistance, along with reopening protocols from large companies in the area.

Large companies with a presence in the city have helped aid in the effort by donating funds and PPE to Dallas Forward for their smaller counterparts to use, officials said, including AT&T and PepsiCo.

About 50% of Dallas' economy relies on these smaller and medium-sized businesses, officials said.

"Please take us up on this offer," co-chair of the effort Fred Perpall said the local business owners.

The city of Plano will reopen a number of public facilities in July, officials said, some with restrictions.

On July 1, Plano stages and the event center will reopen and outdoor exercise programs in the city's parks will resume.

Then on July 6, the library will reopen to patrons to allow them to "Browse, Grab and Go" by checking themselves out after selecting their own materials. "Porchside pickup" will still be available, along with online content.

The city's Parks and Recreation in-person classes will resume on the same day. Certain recreation and aquatic centers will be opened to daily guests and members as well.

And by July 11, the Interurban Railway Museum will reopen to visitors.