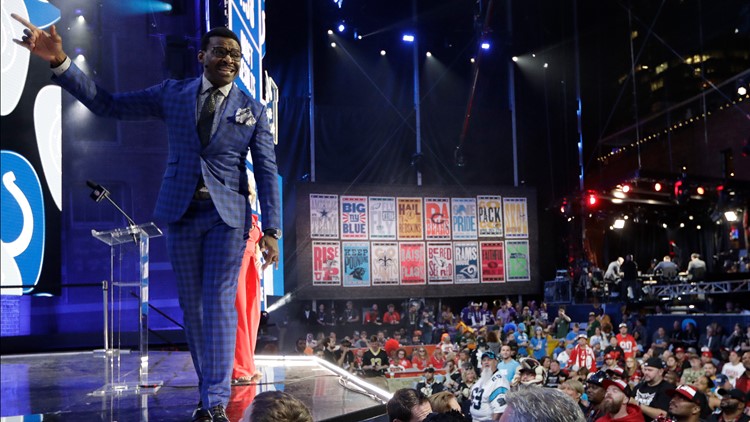 NFL mock draft: What a seven-round draft class could look like for Cowboys

One of the issues with NFL mock drafts that are completely team specific – such as this one on the Dallas Cowboys – is that it becomes increasingly difficult to factor in what other teams will do. So while we may know what the Cowboys will be looking for, it’s difficult to know what 31 other teams are after.

The Cowboys have seven picks in the upcoming draft with their lone compensatory selection coming in the fifth round. Dallas will have no sixth round selection this year due to the trade for Robert Quinn prior to the 2019 season.

For this exercise, we used The Draft Network’s Mock Draft simulator to help provide a different take on a team-specific mock draft. For those who are unfamiliar, The Draft Network gives fans the opportunity to select a draft class for their favorite team while assuming the other teams are also participating.

You can choose which team(s) you want to pick for, select how many rounds and how quickly you want the picks to be selected, and then make selections by round based on a pool of players expected to be available when your team’s pick comes up.

Using the TDN’s predictive board, assuming no trades, here is a seven-round draft class for the Dallas Cowboys:

When the first pick for the Cowboys rolled around, the top three wide receivers were off the board. Two cornerbacks that have been consistently mocked to Dallas, C.J. Henderson and Kristian Fulton, were also gone. The top players available, along with Chaisson, were OT Andrew Thomas, RB D’Andre Swift, S Xavier McKinney, S Grant Delpit and RB Jonathan Taylor.

The Cowboys won’t be drafting a running back in the first round with Ezekiel Elliott and Tony Pollard already in house so we crossed the running backs Swift and Taylor off the list. Thomas would be a great pick if the team didn’t have Tyron Smith and La’el Collins locked into their starting tackle roles. Smith has had health concerns but a tackle is not likely to be a top selection. The Cowboys haven’t shown that safety is a high priority for them despite the Earl Thomas and Jamal Adams trade talks. For that reason, I chose pass rusher Chaisson.

The Cowboys have a concern on the edges with Quinn a free agent and no real plan behind him at this point. The idea of Randy Gregory getting reinstatement seems like a pipe dream right now. Chaisson provides burst off the edge and he can be a player who can really put pressure on left tackles. Give new defensive line coach Jim Tomsula a new toy to mold and let him hunt.

When it came time for the second selection for the Cowboys at pick 51, there were a slew of offensive players available. Three of those being running backs J.K. Dobbins of Ohio State, Clyde Edwards-Helaire of Louisiana State and Cam Akers of Florida State. Much like with their first pick, running back isn’t a need for this team so they weren’t in consideration. Wide receiver, on the other hand, could be an idea here in the second round.

With Michigan’s Donovan Peoples-Jones and Arizona State’s Brandon Aiyuk both sitting there for the taking, it could have been an easy choice to go wideout. However, the receiver class is ridiculously deep and there will be more options at a later selection for the Cowboys.

With health concerns on the interior line with guards Connor Williams and Connor McGovern missing a combined 21 games due to injury in 2019, Ohio State’s Jonah Jackson could be an option. But, when it came down to it, given the lack of playmaking ability on the back end of the defense, the selection went to safety Ashtyn Davis of California.

Davis brings a big play ability in terms of creating turnovers, something that has become foreign to the Cowboys during the Rod Marinelli era. Davis has a nose for the ball, can play coverage and has return ability. Davis also has a track background which shows up with him flying all over the field. Davis is not just a speed guy as he can lay the boom on opposing ball carriers.

When the third pick swung around, Peoples-Jones was still on the board but it still felt too soon to aim for a playmaker on offense. There were three offensive tackles available, though. Prince Tega Wanogho from Auburn and Matthew Peart from UConn were two to consider. The third, Ezra Cleveland of Boise State, might get a look in Dallas for real. The Cowboys could use a swing tackle behind Collins and Smith and the team has an affinity for Boise State products.

Beyond the offensive players sat safety Terrell Burgess of Utah. Burgess was immediately off the list due to taking Davis with the second round selection. Of course, this team could always use more safety help but two in a row would be a waste of draft capital given their positional situations elsewhere. The other defensive player available in this range was cornerback Troy Pride Jr.

Pride was the first cornerback in range during this mock exercise and that made it an easy decision. The team is likely losing Byron Jones to the highest bidder once free agency begins.

The only two cornerbacks under contract with much playing time are Chidobe Awuzie and Jourdan Lewis, so Pride gets to come in and compete for a starting role. Much like Davis, Pride ran track and his speed is on full display. Against Clemson in the 2018 semifinals, Pride allowed just two catches for 12 yards.

In the fourth round, Dallas could have gone with Akeem Davis-Gaither of Appalachian State. The last time Dallas took a linebacker from that school it worked out pretty well as Dexter Coakley is still tied for the most pick-sixes in a career for a Cowboy with four. Given the injury question marks surrounding Leighton Vander Esch, it might be a smart move.

An edge defender out of Syracuse, Alton Robinson, was also available for this pick. With Chaisson leading the class, however, there wasn’t a huge need for another edge rusher.

The debate really started to ramp up as tight end Albert Okwuegbunam out of Missouri was there for the taking. The Cowboys do have a need with the likelihood that Hall of Fame bound Jason Witten is gone next season.

Then there were the wide receivers in Collin Johnson of Texas and Gabriel Davis of Central Florida. Either would be a good selection here but Chase Claypool was too hard to pass up.

Claypool is a big target who can play the “X” role but also has the frame to be a tight end-like slot option. His selection allows for the flexibility to move the other receivers around to create matchups. Claypool was also the highest rated player on the board at the time of selection.

The highest rated player available with the Cowboys first pick in the fifth round was another receiver in Quintez Cephus out of Wisconsin. Given that Claypool was grabbed in the previous round, and with the likeliness of Amari Cooper and Randall Cobb making their return – not to mention Michael Gallup looking like a budding young star – it wasn’t a great fit to double dip at receiver.

Next on the list was linebacker David Woodward of Utah State. Linebacker is somewhat of a need so he was up for consideration. Interior offensive lineman Michael Onwenu of Michigan and edge defender Anfernee Jennings of Alabama were next to be debated. The Cowboys are surely confident that McGovern and Williams can get back in the fold so that left Onwenu out of the mix. Jennings was scratched off due to Chaisson selection.

Safety Javelin Guidry of Utah has a great name but Davis already filled the need at safety so it was tight end Colby Parkinson that caught my eye. The Cowboys could use depth at the position and Parkinson could slide right behind Blake Jarwin and fellow former Stanford Cardinal Dalton Schultz.

Parkinson definitely has the size to be the kind of inline tight end that Dallas traditionally loves and he provides a big target that can be used in the red zone if the Cowboys go that route.

In the second selection slot of the fifth round, the top players available were once again a wide receiver in Tyrie Cleveland of Florida and a running back Sewo Olonilua of Texas Christian. For reasons noted above, these two were not in consideration for this pick.

Edge defender D.J. Wonnum of South Carolina was in the next tier behind the two offensive weapons. However, it was a pair of LSU defenders who were most debated here with Michael Divinity the next player available. The Cowboys didn’t need another edge defender so the pick went to Jacob Phillips.

Phillips has the traits to be a backup linebacker at the NFL level and is someone who can thrive on special teams. With a huge need for better coverage from the special team’s unit, this is where he can make the team.

The Cowboys could be without Sean Lee and Joe Thomas, so the depth at linebacker has taken a hit. Phillips can play limited snaps to keep starters like Vander Esch and Jaylon Smith fresh. The LSU Tiger is someone who could provide some insurance for a position that was pushed to the limit due to injuries in 2019.

For the Cowboys final selection, it was all wide receivers on the board. A couple of Buckeyes in Binjimen Victor and Austin Mack made the list. Next was Aaron Parker of Rhode Island, Jeff Thomas of Miami, and Dezmon Patmon of Washington State. Patmon was interesting due to his size but, given the receiver corp already on the roster, the selection once again went to bolstering the defensive side of the ball.

With that in mind, A.J. Green of Oklahoma State being the only defender available made for an easy pick. Typically seventh round picks aren’t likely to make the roster in their first year but the Cowboys have made a habit of finding later-round players who can eventually contribute. Green can compete for a corner spot in training camp and there’s always the special teams route.

With Byron Jones’ exit looking like a formality, and questions concerning if former sixth-round pick Anthony Brown will return, Green might find his way onto the team in a similar manner to how Brown came in. If he doesn’t make the team, it wouldn’t be a huge miss when considering the hit rate of players taken this late in the process.

In total, with this seven-round class, I have the Cowboys selecting five defenders and two players for the offense while addressing needs at defensive end, safety, cornerback, wide receiver, tight end, and linebacker.

Would you be happy with this draft class that Patrick has concocted? Share your thoughts and mock drafts with Patrick on Twitter @PatSportsGuy.