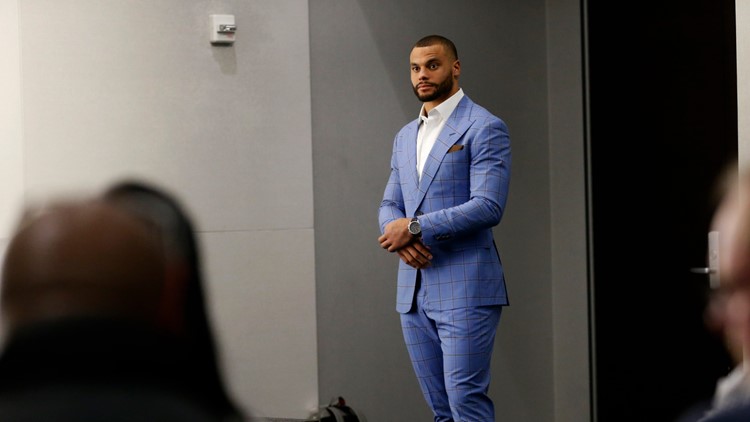 Prescott is due a big payday, but debate of his worthiness will rage on

DALLAS — The Dallas Cowboys have some of the best fans in the world. Despite a long drought of playoff success, you’ll still find legions of supporters who count themselves as devotees. They still root for America’s Team with a passion that few other teams receive. Unfortunately, that love can sometimes cause nasty infighting amongst the faithful.

There’s no better example of this than the contract situation with quarterback Dak Prescott. There are ardent supporters for Prescott to get as much money as he possibly can, while naysayers believe the four-year veteran hasn’t done enough to warrant the sizable deal that Prescott’s about to cash in on.

If the reports are right that Prescott turned down the organization's offer of at least $33 million, with $105 million guaranteed, and the Cowboys indeed sent another, more lucrative proposal, it’s easy to see that there’s going to be more conversations and more consternation about Prescott’s worth.

No matter which way you lean, you’ll find someone to counter your opinion. All you’d have to do to accomplish exhausting yourself is make a quick search for “Dak Prescott” on Twitter. After scrolling through the tweets with words not fit to print, you’d no doubt find things with designs of filtering the collective opinion of many about Prescott’s worth on both sides.

Whether you think Prescott deserves to be one of the highest paid players in the NFL or not, what matters is what the Cowboys believe. Do Jerry and Stephen Jones trust Prescott to run their franchise on the field for the next four or five plus years?

That answer to that question has been a resounding “yes” for the better part of a year now. Both Joneses have been steadfast in their belief of Prescott and, because of that, he won’t be playing anywhere else anytime soon. It’s therefore up to the Cowboys’ braintrust to make Prescott’s contract work for the player they believe in and the team they run.

The Cowboys tried, and failed, to find Troy Aikman’s replacement for years until Tony Romo miraculously worked out. After hitting the lottery with an undrafted free agent, the team struck gold again finding Prescott in the fourth round of the draft.

It would be close to impossible to find back-to-back quarterback success stories like the Cowboys found in Romo and Prescott. The Joneses aren’t going to press their luck in finding another quarterback when they already have one they believe in.

There could be a myriad of reasons for why there hasn’t been an agreement yet. The impending new collective bargaining agreement is a big one, but that doesn’t mean Prescott won’t stay with Dallas. The big money is coming to Dak, who will get it via the franchise tag, or through a long-term agreement before the deadline on Thursday. Prescott will remain a Cowboy for at least the 2020 season, that’s not debatable.

What has been controversial is Prescott’s worth and that shouldn’t be contentious either. Maybe Prescott shouldn’t be paid as one of the highest players in the game, but that matters very little. Timing is on Prescott’s side. If you’re a good quarterback – and Dak is a really good one – you get paid. When it’s your turn to cash in as QB in the NFL, you cash in.

Matt Ryan and Matthew Stafford weren’t the best QB’s in the league when they got their mega extensions, yet they wound up being the highest paid players in NFL history when they signed their deals. It was just their time, and Prescott’s time has arrived. The quarterback position in the NFL is unlike any other in sports. When you have one that can win, you hang onto them.

Dak Prescott is a really good quarterback who played his best football in 2019. Prescott’s numbers were in the top five in the league across most major QB categories and he has the second most wins in the league since entering the NFL. The Cowboys believe that Prescott is the man who will turn those numbers into playoff victories soon.

The debate may rage on, but there is no disputing that Prescott will be paid as one of the top QB’s in the league. It’s his time.

Will you be happy when Dak Prescott’s contract extension finally gets signed or do you think the Cowboys would be foolish to make the deal? Share your thoughts with Ben on Twitter @BenGrimaldi.