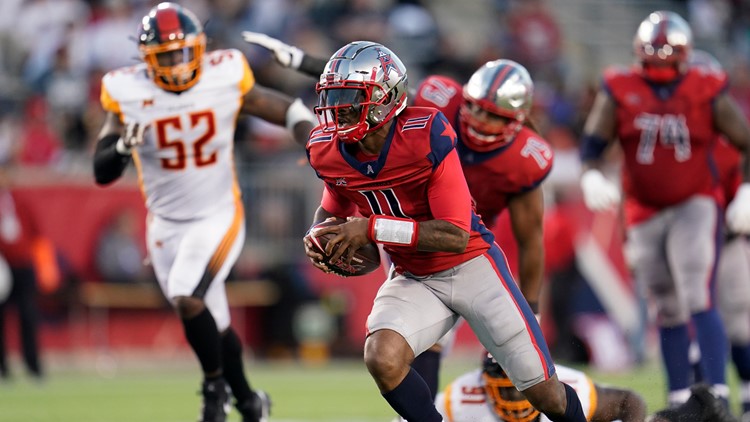 The sporting world was ravaged by the pandemic status of the coronavirus outbreak this week, as almost every professional and big-time collegiate organization shut down their games for the foreseeable future. This included the shuttering of the inaugural season of the rebooted XFL.

The Vince McMahon-backed startup football league began in late winter to better-than-expected results on the field. By canceling the remainder of the season, the XFL announced players are immediately available to sign with NFL teams.

There might still be some precautionary travel issues due to the virus, but teams are now free to agree to deals with XFL star players.

Two players of note should be of interest to the Dallas Cowboys. Quarterback P.J. Walker and punter Marquette King were two performers having eye-opening seasons at positions that the Cowboys have a need.

Walker was the star of the league for the Houston Roughnecks, leading them to an undefeated record through the league’s first five weeks. The former Temple standout led the XFL in touchdown passes with 15, passing yards (1,338 yards) and was second in passer rating at 104.4.

If there was to be an MVP for the XFL in 2020, Walker was the front-runner for the award. Walker showed enough arm strength and impressive athleticism to attract attention and it seems likely that he’ll be snatched up by an NFL team.

With that in mind, the Cowboys should be looking into adding Walker as a backup to starter Dak Prescott. The team did tender current clipboard holder Cooper Rush at $2.1 million this week, but Rush hasn’t shown any signs of being able to play at a high enough level to win games if he were forced into action.

If something were to happen to Prescott, or if he doesn’t sign an extension and decides to hold out if the franchise tag gets adhered to him, Rush would be the starting quarterback for the Cowboys. No one with the organization should be comfortable with that proposition.

Walker was with the Indianapolis Colts as a practice squad member on and off for three years, but has never thrown a pass in a regular season NFL game. There’s no more evidence that Walker would be a better option than Rush, but it’s worth it to find out.

Bringing in Walker to compete with Rush for the backup job would be a smart play for the Cowboys. Dallas should also look at bringing in punter Marquette King, who was most recently playing for the St. Louis BattleHawks.

Unlike Walker, King does have NFL experience, playing for the Oakland Raiders and Denver Broncos over seven seasons. King was second-team All-Pro in 2016 and was the league’s punting yardage leader in 2014. The 31-year old punter was tied for the XFL lead in yards per kick at 46.7, which would have ranked him 10th in the NFL this past season.

The current punter for the Cowboys, Chris Jones, had one of the worst averages in the league last year at just 41.6 yards per punt. Jones was also next to last in punts downed inside the 20 last season with just 18.

If the Cowboys are serious about upgrading their special teams in 2020, and they certainly should be, signing King to compete with Jones would be a good idea. Cutting Jones would also clear $1.4 million off the cap, but leave $1 million in dead money.

The Cowboys should look into many of the best players from the XFL, but Walker and King are two options who could immediately improve soft spots on the roster. Both XFL standouts have the potential to help the team in 2020 and it’s worth taking a flier on a couple of players who are now looking for an opportunity amid unfortunate circumstances.

Do you think the Cowboys should comb XFL talent to fill needs for 2020? Share your thoughts with Ben on Twitter  @BenGrimaldi.