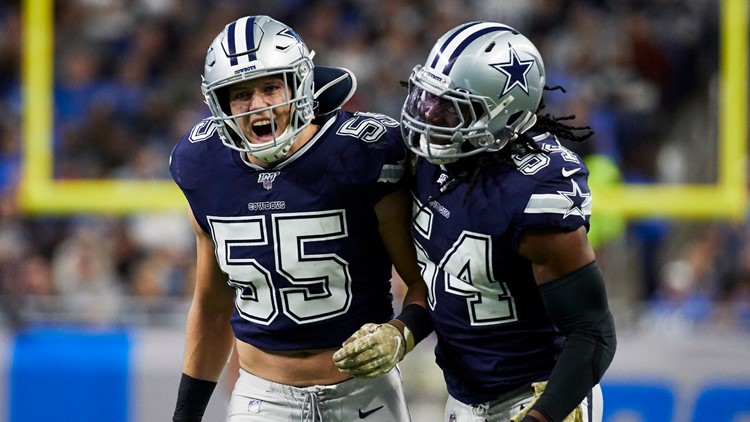 Cowboys surprisingly shaky at linebacker ahead of free agency

With the list of offseason needs already bordering on lengthy, the Dallas Cowboys might also find themselves in the market for linebacker help in free agency and the NFL Draft.

Even though Dallas thought they had one of the youngest, brightest linebacker groups in the league coming into the 2019 season, regression reared its ugly head and now the Cowboys will be spending the spring months looking for answers to their questions at the position.

The biggest of those questions involves the health of former first-round selection Leighton Vander Esch. After missing action in the middle stages of the season, 2018 rookie standout Vander Esch had a “minor” procedure on his neck and ended up missing the final six games in 2019.

While the team is optimistic that Vander Esch will be available for the offseason program, any impairment having to do with backs and necks can be a long term cause for concern, especially for linebackers in the NFL. Whether or not the former Boise State Bronco can give it a full go during the offseason, or if he will be ready to suit up for another season later this year, the Cowboys might have even more pertinent fish to fry than just their second-year linebacker.

According to reports from Jori Epstein of USA Today Sports, Sean Lee wants to continue playing football in 2020. That’s potentially good news for the Cowboys, as the veteran Lee provided valuable snaps in Vander Esch’s absence. Where things get dicey, however, is Lee is under no obligation to continue his career in Dallas as the second-round pick from the 2010 NFL Draft is eligible to suit up elsewhere as a free agent.

Owner Jerry Jones seems to want Lee back but you never know how things will shake out once a player reaches free agency.

With Vander Esch’s injury and Lee’s status up in the air, the Cowboys suddenly have a possible glaring need at linebacker. In addition to Lee’s potential departure, the team will see most of the depth at the position hit the market as Joe Thomas, Malcolm Smith, and Justin March are on expiring contracts. Even though it might be far-fetched to believe that all of them will be playing elsewhere in 2020, one of the deepest position groups for the Cowboys in 2019 is suddenly beginning to feel like one of their weakest.

Outside of Vander Esch, the only other linebackers currently under contract for next season are Pro Bowler Jaylon Smith – who was signed to a long term deal prior to the 2019 season, 2018 sixth-round pick Chris Covington and 2019 undrafted free agent Luke Gifford.

The team will need to find depth and insurance for Vander Esch just in case his recovery doesn’t go as planned. While both he and Smith are young and talented, Dallas doesn’t currently have much insurance at the position for two players with injury histories. Keeping Vander Esch and Smith fresh was a big part of Lee’s job in 2019, and coming off the bench helped Lee have one of his more productive seasons in recent years.

However, just because Dallas will need to make sure they load up on support for their skilled linebacker talent, it doesn’t necessarily mean that the position will shoot up the draft board. Dallas will have other, more pressing needs to address but finding quality depth, whether it comes in the form of a draft selection or free agency, will need to take place.

One name that could be on the radar is A.J. Klein who spent time under Mike Nolan in New Orleans. Klein brings the requisite experience to the position. The 2013 fifth-round selection out of Iowa State recorded 191 total tackles with 6.5 sacks, two interceptions and two forced fumbles in three seasons for the Saints, all under the tutelage of Nolan.

Klein would be a suitable candidate to provide Dallas with Vander Esch insurance in 2020, should they decide it’s finally time to part with General Lee.

Do you think Leighton Vander Esch will have a rebound year in 2020? Share your LB corps thoughts with Patrick on Twitter @PatSportsGuy.

Why Tom Brady to the Cowboys would be doomed to fail