The entertainment spot in Rockwall went viral over the weekend after someone noticed that Deandre Jordan, Rajon Rondo, and Lamar Odom were banned from the premises. 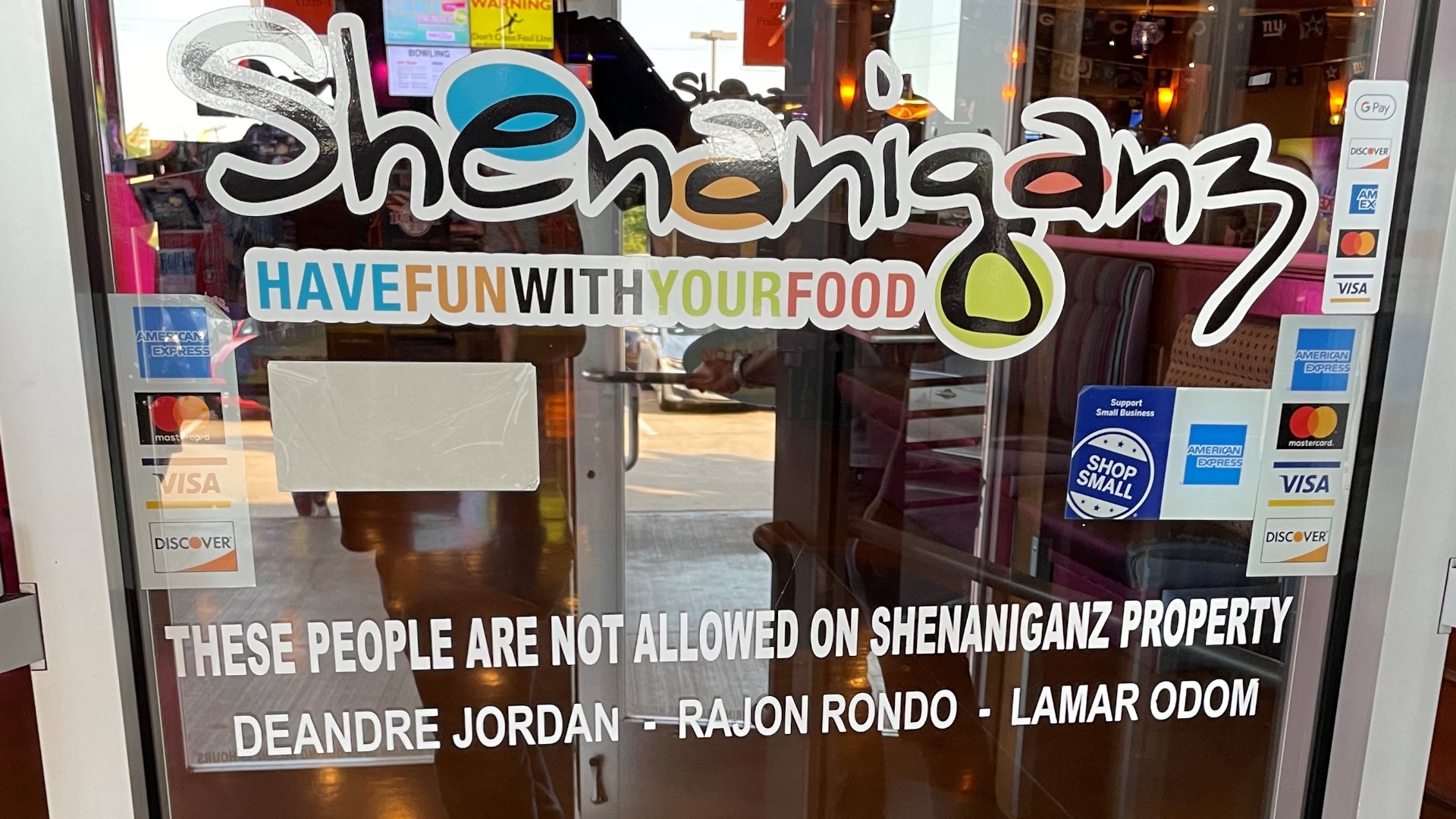 ROCKWALL, Texas — Dallas Mavericks fans have endured a rollercoaster ride of emotions after the team recently failed to close the door on the Los Angeles Clippers in the playoffs after leading the series 2-0.

The team has not won a playoff series since winning the NBA Finals in 2011.

Shortly after, the bumpy ride continued after both longtime Head Coach Rick Carlisle and General Manager Donnie Nelson walked away from the team.

There's a lot of uncertainty hovering over the team right now.

But there's one thing that Mavericks fans can count on: DeAndre Jordan, Rajon Rondo, and Lamar Odom will never have fun at Shenaniganz in Rockwall.

Rest easy knowing those three well-known NBA players who never made it very far with the team (and arguably made it worse) can't hurt you if you decide to bowl, play video games, laser tag, or throw axes at the "eatertainment" venue known as Shenaniganz.

What did they do?? pic.twitter.com/M60q0NDXU2

The entertainment spot went viral over the weekend after someone noticed signage on the door saying Jordan, Rondo, and Odom weren't allowed on the premises.

WFAA checked with part-owner Parker Coddington, who runs the business with his family.

He confirmed that all three have never been to the property or committed a ban-worthy offense there but are not allowed due to their poor performance with the Mavericks.

RELATED: 'I am happy to support my Mavs' | Dirk rejoins Dallas franchise to help with front office search

"They could crawl here on hands and knees from whatever city they're living in and beg, and we still wouldn't let them inside," Coddington said.

Coddington, who says he is a Mavs superfan, the ban is all in good fun and started when Jordan verbally committed to the Mavericks yet backed out at the last minute to sign with the Clippers in 2015.

It was a fiasco that largely played out over Twitter.

"After DeAndre pulled his antics, we said that guy would never be welcome here. So then we just started making a list," Coddington said with a laugh.

In the playoffs in 2015, Rondo was accused of quitting on the team and reportedly didn't receive a share of $208,940, which is awarded to teams that lost in the first round of the playoffs at the time.

The Mavs announced Rondo had suffered a back injury, but a source told ESPNDallas.com that the team and Rondo actually reached a mutual decision to go their separate ways after he played only 9 minutes and 55 seconds in Dallas' Game 2 loss.

Players determine how the team's playoff shares are divided. The players did not vote to exclude Rondo, the source said. They were simply presented with a list that did not include him, and there were no objections.

"He quit in the middle of the playoffs, and then the team voted for him not to get a cut. I mean, that never happens in the NBA," Coddington said.

Alright, so what about Odom? Well, Coddington said he was frustrated that he never gelled with the team.

"We traded a no. 1 draft pick for Lamar, and then he was gone before the season ended," Coddington said.

But after this season, would Coddington add any more names? How about former coach Rick Carlisle?

"He got Dirk a ring, so he's welcome," Coddington said.

What about Dwayne Wade? Why isn't he listed at the entrance? After all, he's hated by Mavs fans for costing the team a title in 2006.

"That's a given that he's banned," Coddington said with a laugh. "Everyone knows that flopping son of a gun is not welcome on Shenaniganz' premises."

OK, understood. Is there room for Kristaps Porzingis at this eatertainment venue?

"That depends on the next three years," Coddington said. "If he blows this window with Luka Doncic, it's going to hang in the balance."

RELATED: So now what for the Dallas Mavericks?

Oh, and Coddington said Jordan, Rondo, and Odom can come inside his place on one condition: they make a sizable donation to the Boys & Girls Club in Northeast Texas.

But even then, Coddington said they have to pay to come inside.

"At least, we'll let them in the doors," Coddington said with a laugh.