Mike Leslie brings you the latest from Rangers spring training. 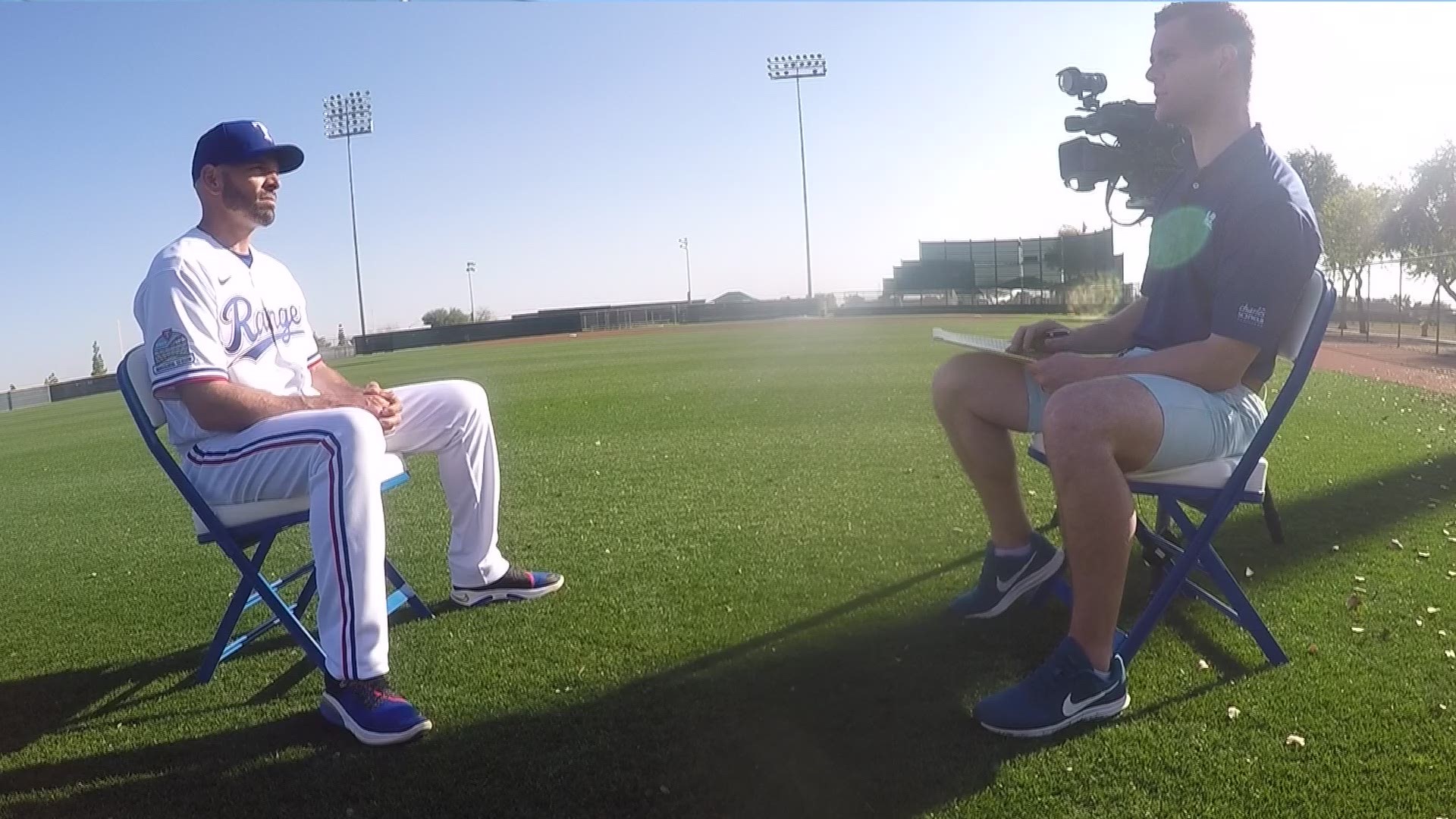 SURPRISE, Ariz. — The wait is over, Texas Rangers fans — spring training is finally here. WFAA sports reporter Mike Leslie is in Surprise, Ariz. to give you all the details on this season's Rangers squad.

Believe it or not, my time here in Surprise is already winding to a close. Tonight is my last full night in town.  I'll be out here for the entire day tomorrow, talking with players, watching practice, and soaking in just a little bit more of the Spring Training vibe.  But then I fly back to DFW on Thursday night, getting in just before midnight.

The week flew by.

But before we start eulogizing my time in Arizona... there's still work to be done.  The Rangers are one day closer to real games -- those start Friday, against their stadium-partners, the Kansas City Royals.  And we're starting to get a clearer picture of who Corey Kluber will be for the Rangers, leading off what looks to be a strong rotation.  I spoke with Kluber this morning, and he's clearly focused on pitching. Not what anyone else thinks of him. Not being back in DFW (although he is excited to play in Arlington, after he grew up going to Rangers games). Not anything. Except pitching.  He wants, very much, to get back to the kind of success he had over a five-season stretch with the Indians, from 2014-18.  Chris Woodward calls him "laser focused".  I might be more inclined to call him "not very talkative" (I kid, I kid).  Frankly, I think it's both.  But regardless, he has his sights set on being extremely effective for the Rangers, and leaving that broken arm and rough season of 2019 behind him.  And that's very good news for the Rangers.

See more of Kluber's story, including his Coppell connection, tonight at 10 p.m. on WFAA!

Not much has changed since we last checked in, but we wanted to share some video with you. Because who doesn't want to see the Rangers new ace Corey Kluber -- a Coppell High School product, by the way -- showing a little of what he can do on the bump.

Having this guy leading off the rotation figures to be a big deal for this club, as they now look to have a truly strong 1-2-3.

Workout number two is finished for the Rangers, as they inch a little closer to games. These first few days of Spring Training are truly unique, because there aren't any games. It's all workouts, all the time. Every morning. Monday through Thursday. Games start Friday, and the entire vibe changes.

That's especially the case for the fans. If you want to come to Spring Training for the purpose of meeting and interacting with players, these are the days to come. With no games to focus on yet, players are more engaging, more inviting and more inclined to sign autographs, take pictures and share a moment with you as they move from drill to drill.

Shirley Kost is the primest of prime examples of this. She's otherwise known as "the cookie lady" around the Texas Rangers world. She's from Pantego, and is a fixture at games in Arlington, too. But it's at Spring Training where she really shines.

Cookies for all the players, coaches, and all her friends who have enjoyed spring training year after year. For Shirley, it dates back to 1991. But the cookies started in 2000.

The first full-squad workout of the spring is in the books for the Rangers. The entire team can now say they are off and running in 2020.

RELATED: Andrus' age makes him an anomaly at shortstop, but Rangers believe he can produce

Manager Chris Woodward spoke with the media late Monday morning, and expressed his satisfaction with the mentality of this Rangers clubhouse.

"I would say that's probably our biggest 'talent' - the character and the integrity that we have in that clubhouse is second to none that I've been around," Woodward said.

Some of the key players got their first chance to take some cuts in batting practice, including 2019 All-Star Joey Gallo.

All things considered, the first workout of the morning was a success. Wish you were here!

Just getting cranked up on this Monday morning, but we've already been in and out of the Rangers clubhouse and talked with some of the key players for this 2020 season. Shin Soo Choo thinks the offense needs "more consistency" in 2020. "Good teams are always consistent," Choo said. "High on-base percentage. Doesn't matter how you get on base, but you've got to get on base. See a lot of pitches. We just need more consistency."

That seems possible for a lineup that adds the likelihood of a more consistent presence at third base in Todd Frazier and a catcher with the return of Robinson Chirinos.  In addition, All-Star Joey Gallo is another year older and figures to be more refined as a hitter with experience.

RELATED: Is it just a new ballpark? What to expect from the 2020 Texas Rangers

"You know, I look around the clubhouse and I see a lot of really good players," Gallo said. "If we can keep this group together, and come together, and everybody just pull for each other and be a group of 25 guys, there's no telling what we could do."

RELATED: Woodward lauds Choo's approach, wants him back in '21

Spring has finally sprung for the 2020 Texas Rangers.  It's sunny and 73 as we arrive in Surprise, Arizona on the same day the full team is required to report.

We're told veteran shortstop Elvis Andrus was among the final few guys to arrive Sunday, early in the afternoon.  The team had some meetings and did their best to orient themselves for a month's worth of work in the desert, to prepare for the inaugural season at Globe Life Field.

There are so many questions yet to be answered for this team. Will Rougned Odor stick at second base, or has the long, bizarre experiment run its course? Will the starting rotation be as strong as Rangers fans hope, given the addition of former Cleveland pitcher (and Coppell High School product) Corey Kluber? And can shortstop Elvis Andrus return to his form of a few years ago, or have injuries and age finally caught up with the longest-tenured Ranger?

Some of these answers may come in the five days we're here (we head home Thursday night). Some will assuredly take all of spring, and some of the regular season to answer. But we're here in Surprise to start asking those questions... and start figuring out what reality will be for the Rangers in 2020.