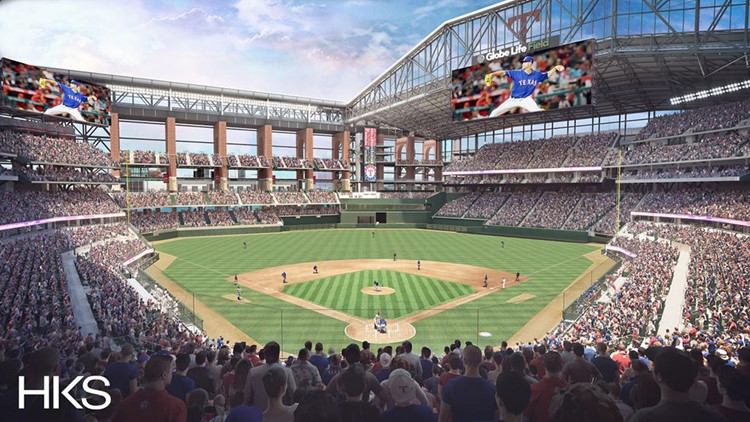 Photo by: HKS
A rendering from HKS of the Texas Rangers new ballpark, Globe Life Field

Is it just a new ballpark? What to expect from the 2020 Texas Rangers

SURPRISE, Ariz. — It may just be vernal false hope, but there's a buzz around Spring Training as we arrive for the 2020 Texas Rangers baseball season.  There's something about this club that has been missing in recent years.

"You know, I look around the clubhouse and I see a lot of really good players," all star outfielder Joey Gallo said. "If we can keep this group together, and come together, and everybody just pull for each other and be a group of 25 guys, there's no telling what we could do."

Quotes like that get thrown around in most Spring Training clubhouses around the league every year.  Hope springs eternal, blah blah blah.  But when you look at the roster around the Rangers only position player to be named all star in 2019, you start to get the feeling that he's not entirely full of it.

Let's start here.  No one -- at least not me -- is saying the Rangers are going to turn juggernaut, win the AL West, or do anything of the sort.  But contention?  Yeah, I think that's a tangible possibility.

BUT, this year.  This year feels like one where you can count on the Rangers to give you something to actually hope and pine for into the month of September.   Now, there's an 18-game gap that the Rangers have to make up between themselves and the final playoff spot.  That's how far behind the second AL wildcard Tampa Bay Rays they finished last year.   That may ultimately prove too steep a hill to climb.  But pushing the Rays, A's, Angels, Red Sox, etc. for one of the wildcards does feel like something this club can do.

And let's start with reason number one for that hope. The Rangers add Corey Kluber to the top of a starting rotation that all of a sudden looks like something Texas fans can get excited about.  Kluber is a three-time all-star, a two-time Cy Young winner, and for a five year stretch from 2014-18, he was one of the top 10 pitchers in baseball.  Yes, he's 33, pitched in only seven games last year, and is coming off a broken arm suffered last season.  But the Rangers are betting he's still got the goods. And if he does, this rotation is very strong.  That's because Mike Minor and Lance Lynn slot in right behind him.  Minor and Lynn both had fantastic 2019 seasons, tying for the 3rd-best wins above replacement mark in all of baseball for pitchers.  #1 among pitchers was Jacob deGrom, who won the NL Cy Young.  #2 among pitchers was Justin Verlander, who won the AL Cy Young.   Lynn and Minor were right on their heels.  These guys can pitch.  And if they can back up last year's performance, Texas has a bonafide 1-2-3.   Kyle Gibson (13-7, 4.84 ERA last year with the Twins) and Jordan Lyles (who finished last year with a very strong 7-1 record and a 2.45 ERA in 11 starts with the Brewers) figure to round out a solid rotation.

The bullpen centers around closer Jose LeClerc.  The young righty is coming off another solid season, and continues to grow into the role at the back of the bullpen.  Whether he is pitching the ninth inning, or being moved around to higher-leverage situations, he's the most solid piece the Rangers have in the pen.

Joey Gallo is your lynchpin. If he can build off of an all star campaign, continue to hit for a reasonable average (north of .250, for sure), and keep pushing that on-base percentage toward the higher end of the .380s and .390s, he can be an MVP candidate.  His raw power is the stuff of legend, and he figures to be a 40+ home run guy again this season, as long as health cooperates.  Everything begins and ends with Paul Bunyan in right field.

From there, it comes down to who wants to step up.  Will Elvis Andrus get back to his old self, thanks to health and an offseason he says was relaxing?  The Rangers need their longest-tenured player to hit at a high level if they're going to contend.  Is Rougned Odor the answer at second base, or this experiment run its course?  He has been as mercurial as any player we've seen come through this organization in a long time. If he can't find some consistency, Nick Solak is waiting to seize that second base spot.  Shin Soo Choo continues to produce at an admirable level, despite moving into his final year of a contract.  If Texas can indeed show they are contenders, Choo will likely be a key piece of the puzzle.  If they don't, he might be wearing a different jersey come August.

Everyone wants to see the new ballpark. That's fine, and that's fair. And that, by itself will draw a good deal of attention in April and May.  Frankly, it may draw even more in June, July, and August, merely for the novelty of going to a baseball game in the summer and not losing eleven pounds.  But there feels like a real chance for this team to still be drawing people to Arlington in September, for games that actually matter.