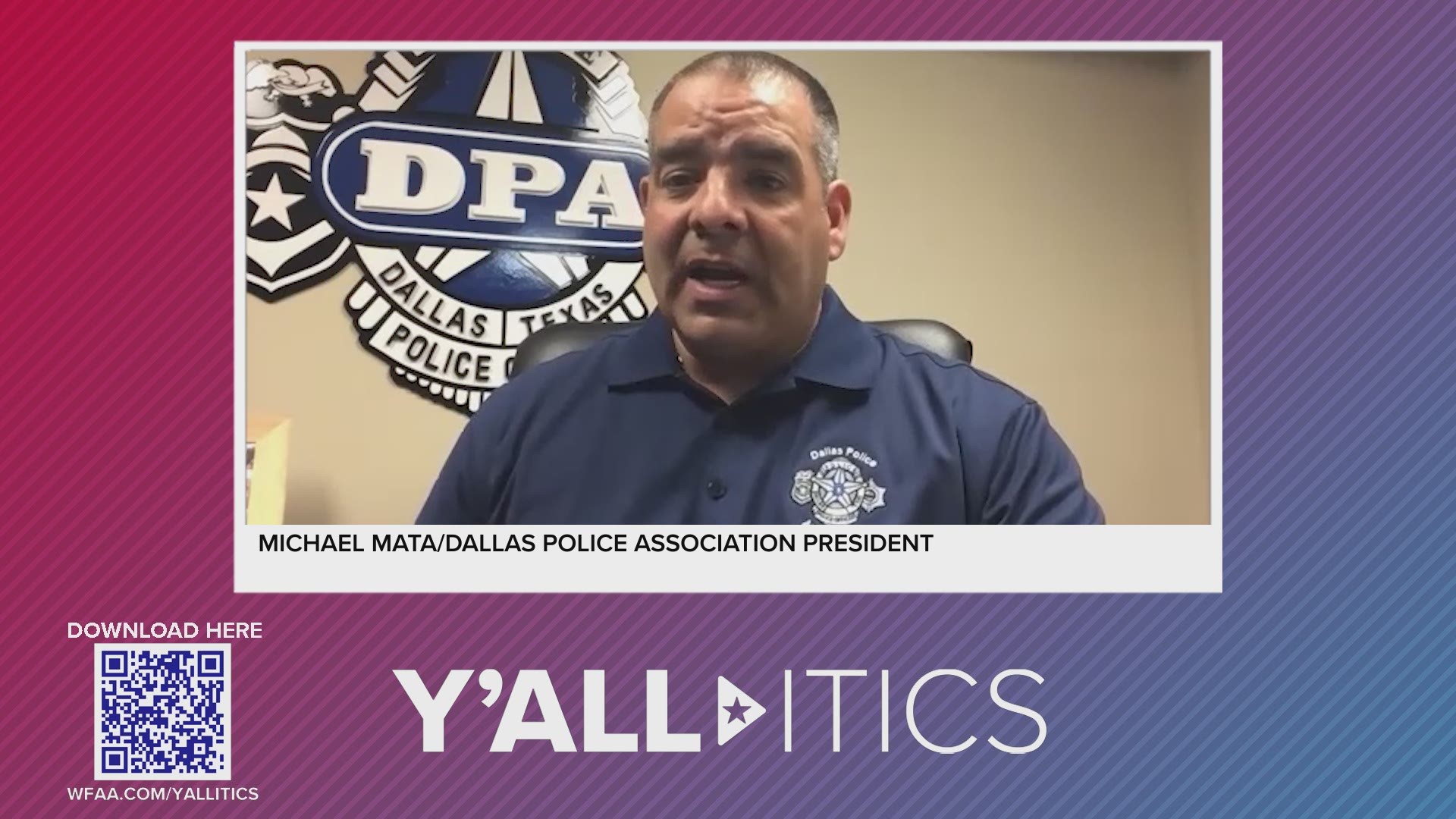 DALLAS — Texans are one signature away from being able to carry their handguns in public without a permit. Many members of law enforcement say permitless carry will make their jobs far more dangerous and the consequences are coming.

“We have no idea who the good guy is. I heard time and time again, the legislature say, well, the good guys are going to carry guns. Well, nobody wears a t-shirt that says I’m the good guy,” Dallas Police Association President Michael Mata said on Y’all-itics.

McKinney City council member Frederick Frazier has also been a long-time lobbyist for law enforcement issues. Both he and Mata testified against House Bill 1927.

HB 1927 removes the requirement for Texas residents to get a license in order to carry handguns. People prohibited by state or federal law from a possessing a gun are not included.

Changes to the bill in the Senate included enhancing criminal penalties for felons and family violence offenders caught carrying and removing a provision that would have barred police officers from questioning people based solely on them possessing a handgun.

Why are law enforcement experts concerned?

Frazier said he showed plenty of pictures of folks who shot up ceilings instead of a target because they weren’t trained properly to give lawmakers an idea of what was coming.

“There is no training. So those ceiling shooters are going to be the people carrying the gun and where that bullet goes, who knows? Because there’s been zero training and zero background check, that’s a recipe for disaster,” Frazier said.

For perspective, these experts say Dallas police officers go through 38 weeks of training to get out of the Academy. That includes drawing their weapon at least 2,000 times to get comfortable with the hand/eye coordination. Officers also handcuff at least 5,000 times.

But this bill requires none of that. Mata said the potential for violent confrontation is also firmly baked into that recipe for disaster. That, he said, is true for officers.

RELATED: Dallas police chief among those against 'constitutional carry' of handguns in Texas

It's also true for regular Texans. Mata asked you to simply think about everything you’ve done over the past week or two and the public areas you’ve visited.

Mata also expects the new law to lead to more 911 calls, which he said will lead to slower response times.

Why it passed now

Permitless carry has come up in sessions past, but it never gained the momentum needed to pass such a major change.

Frazier said this session, the bill was brought up under the cover of darkness, so it escaped some level of scrutiny. Another factor, they both said, is pure politics and a desire to get re-elected.

“Every single city in Texas has seen murder and violent crime go up by double digits. That was the number one topic everybody was talking about -- crime, crime, crime. So I’m sure they (lawmakers) were getting beat up on that. And so, they’re thinking, well, let’s give everybody a gun, that’s going to lower crime. Well, no. No, you just gave a deadly weapon to individuals who were already fighting each other and arguing,” Mata said.

RELATED: 'Permitless carry' initially didn’t have the votes to clear the Texas Senate. How did it pass?

Once Gov. Greg Abbott signs the legislation into law, which is expected, it will take effect Sept. 1. Mata said because of that timeline, there simply wouldn’t be enough time to change the training for every officer in the state, something many smaller departments couldn’t afford anyways.

At the end of the day, these experts can’t help but think about all of the licenses we need to do basic activities in the state of Texas: to hunt on your own land; to drive down the street; even just to fish.

“You will not need any type of license to carry a weapon,” Frazier said. “You gotta vote? You gotta take a license. Remember that was a big GOP narrative, you better bring your license. But to carry a pistol, open, willy nilly? You don’t have to have anything. You don’t even have to tell them your name.”

Across the country, 21 states have some form of constitutional or "permitless" carry of handguns.

Both experts say the bill could have been much, much worse. To hear the full conversation, listen to our latest episode of Y’all-itics and subscribe wherever you get your podcasts: Apple Podcasts | Spotify | Stitcher | Amazon Music