An expert says there's only one thing that can slow down runaway housing train in Texas. 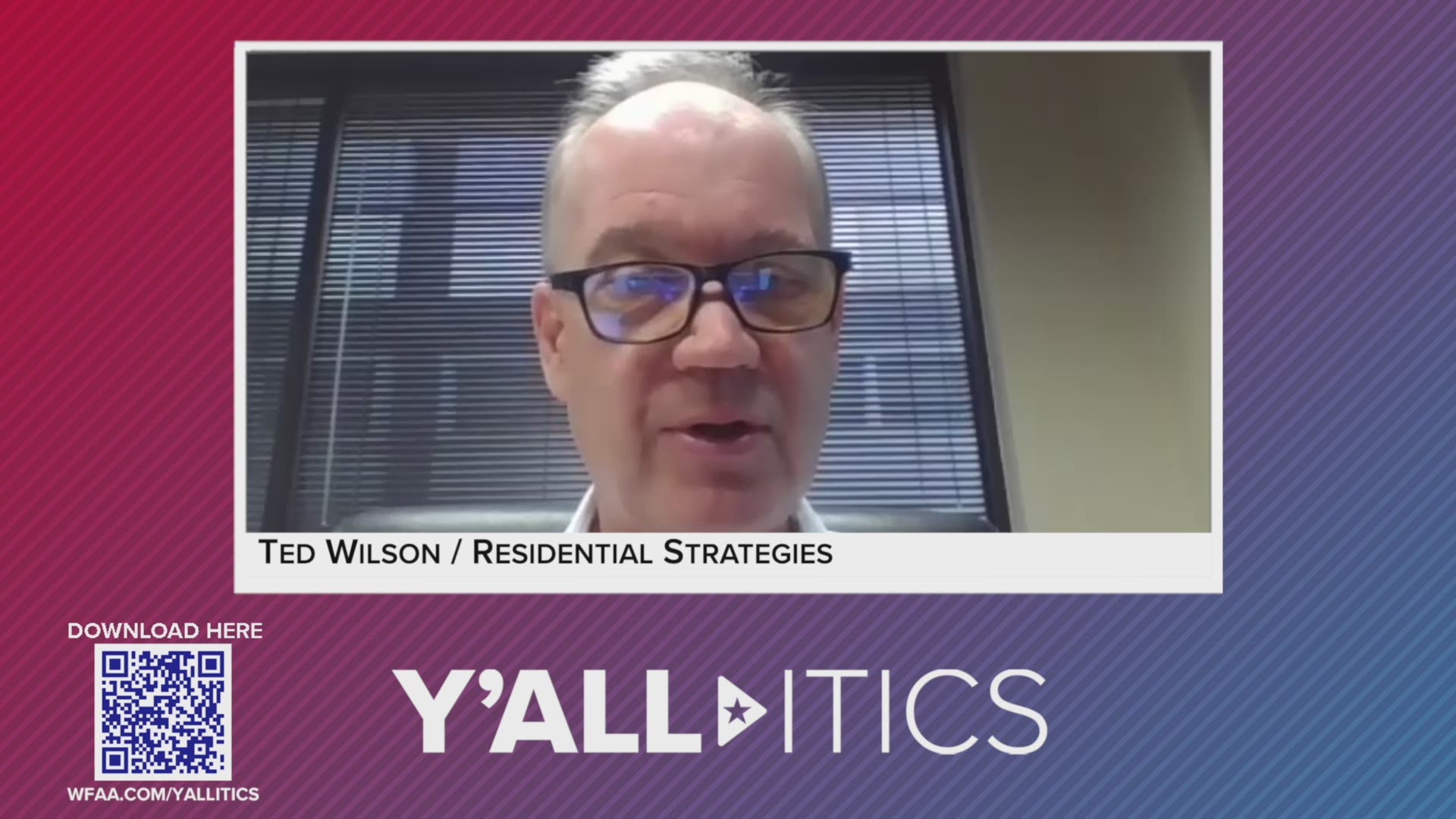 DALLAS — Whether you’re building or buying, it’s a brutal housing market in Texas. And it’s about to get even tougher as we enter the summer season, when people really start looking for a new home.

“This is unprecedented. It’s unlike anything I’ve seen in my career,” Ted Wilson said on Y’all-itics. I think I used the analogy of, you know, it’s like flying an airplane right now and you’re looking at the dials and everything is extreme right now. The airplane is still flying, but you kind of wonder how this is all going to come together.”

Ted Wilson is one of the state’s foremost residential construction experts. He founded a company, Residential Strategies, in 1997 that provides market research for builders, lot developers and lenders.

He said Texas leads the country, by far, in new housing permits. In the first four months of 2021, 88,209 permits were issued for new single-family homes in the Lone Star State. But demand is outpacing supply by a Texas mile.

To hear more about the impact of construction costs on the housing market, subscribe to Y'all-itics wherever you get your podcasts: Apple Podcasts | Spotify | Stitcher | Amazon Music

What is fueling the surge?

Wilson said there are several reasons for this unprecedented surge, starting with the mortgage rate hitting a record low and continuing to hover there. That led to many renters deciding to become buyers.

But Wilson also pointed to the maturing of millennials, many now in their early to mid 30s, who are deciding to buy homes. And they managed to save some money during the pandemic.

Finally, Wilson said relocations for work are also fueling the demand, with new residents moving to Texas from all over the country.

“So, the market psychology has changed. There’s a lot more emphasis on the home. So, there are a lot of renters who say, 'Boy, I didn’t like being cooped up in that small rental space during the pandemic,'” Wilson said.

Wilson said that the move by more companies allowing employees to work from home, means more people are working from home and looking for more space. He said people are embracing the "ex-urban lifestyle."

This demand is placing incredible amounts of pressure on builders and lot developers. Material prices keep rising every day, so many builders have been burned. Lumber is up. Cement is up. Brick is in short supply. Builders can’t even get radiant barrier, which helps with insulation.

When Wilson’s company did a survey, builders said their costs are up nearly 18% year-over-year.

That means they may agree to build a home for $150,000, but during the build, the material costs push that price to $170,000. That’s a significant loss of potential profit for a builder.

Wilson said many will delay starting units for several months or they’ll take what’s called a “spec and release” approach, where they’ll build a home, but won’t sell it until they know exactly what the costs are. Either way, it adds more pressure to housing, because it limits availability.

Despite all of this, Wilson said builders are still enjoying record profits.

It’s so competitive in Texas right now, it’s hard to even find the dirt to build on. Wilson said the lot supply has been stripped and the supply of vacant lots has declined from a normal 24-month supply down to under a 16-month supply.

Even though housing starts in Dallas-Fort Worth have jumped by 50% since the first quarter of 2019, the number of vacant lots hasn’t changed. Wilson predicted that new housing starts will climb to around 55,000, so it’s clear to see how that ratio will get squeezed even more.

“It's going to be a very tight market as we go forward, and as you can imagine it's created inflationary situation on that side of the equation as well," he said. "So, the next round of lots likely are going to be up anywhere from 15 to 25%, depending on which markets you're looking at.”

What could calm the market down?

And as Wilson sees it, there’s really only one factor that can slow down this runaway housing train in Texas: the mortgage rate.  On June 1, Zillow reported the 30-year fixed mortgage rate remained stable at 2.87%.

Wilson said the market could still function with the same kind of heat if rates hit 3.5 to 4%. Once you start going above that, the market will begin to price out several potential home buyers. Wilson would put the rate at 4.5% to put the brakes on the sizzling market.

“Housing costs are up about 20% and household incomes are only up about 10%. So, you know, you look at this and kind of say well, what does that suggest? It suggests that that 4.5% level is probably the threshold where we could really start to run into some challenges in this market,” said Wilson.

On the buyer side of the equation, the obstacles can be much more widespread than material costs or competition for a particular home.

Dallas resident Jeff Platt is building a new home and finished his design in May of 2020. He and his family moved into an apartment, expecting a quick teardown and build.

His builder told him the process to get a permit usually takes two or three weeks. It took the Platts nine months to get that permit; they didn't receive it until Dec. 2020.

“You’d hear nothing for weeks at a time. And there were two or three different things that we got answers back that didn’t make any sense as to what the delays were. But you had to kind of push to even get anything. It was just total silence is what we mostly got,” Platt said on Y’all-itics.

Platt also had a problem with the framer his builder hired. That crew dropped wood off on a Monday. By Friday, they had backed out of the project. Platt said he thinks they got a much higher offer to complete a different job and took it. But it led to yet another delay for the family.

These types of stories and complaints about bureaucracy and permit delays are commonplace all across Texas.

The Platts are now expecting to have their new home finished in September 2021, around 19 months after starting their project. And that assumes no more delays.

If you’re building or thinking about building, Platt has some good advice: be patient and double your “what if” budget.

“When you’re establishing your budget, put a bigger number for whatever they’re going to call it. We called it a slush in our budget of just what ifs,” he said. “There was a number in there and we doubled that number in his budget to start with. Say, we know we’re going to hit some things along the way.”