"Cities that endanger their residents should not be able to turn around and raise more taxes from those same Texans," Abbott said. 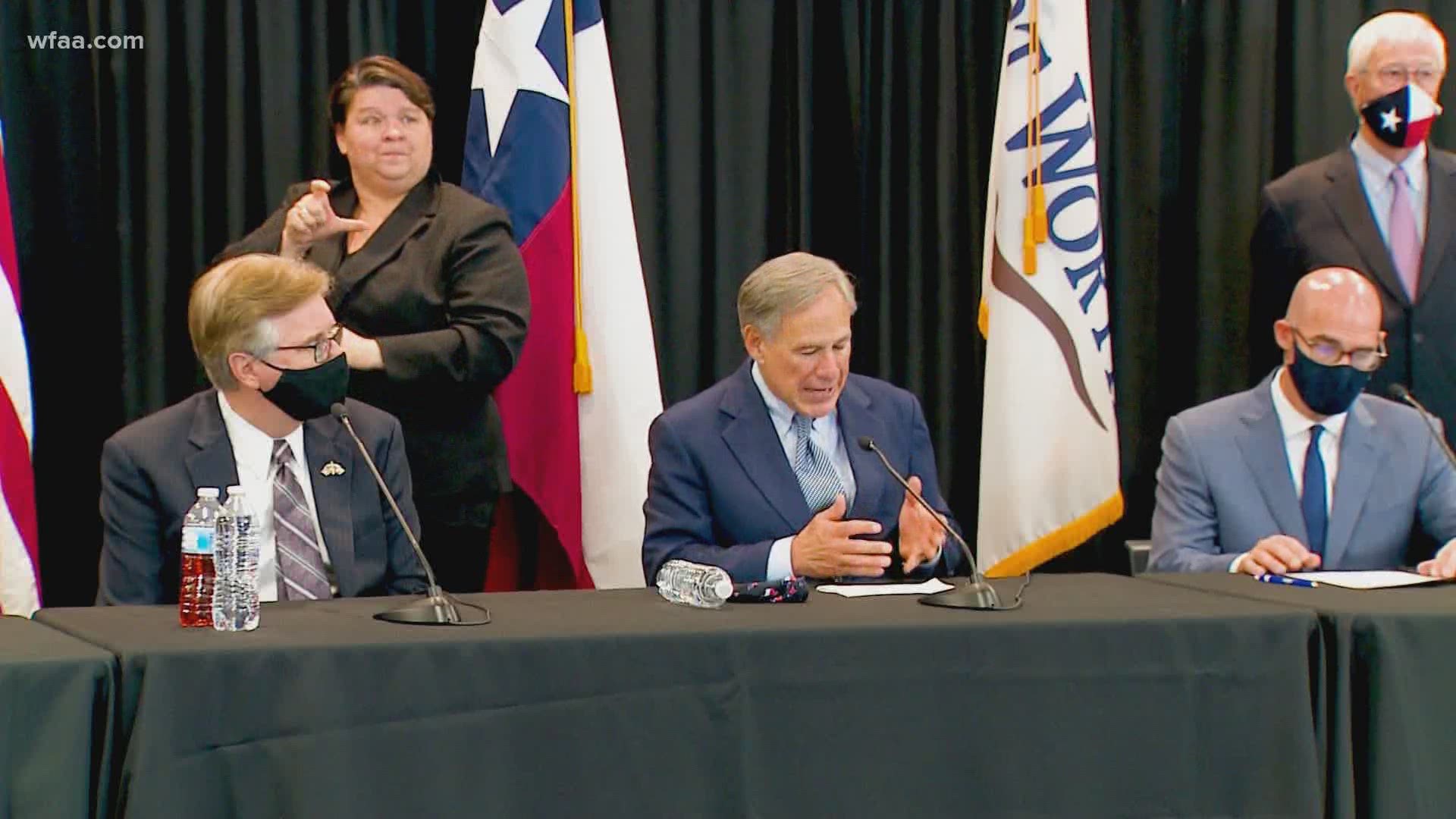 Updated at 4 p.m. to include a statement from Dallas Mayor Eric Johnson.

Gov. Greg Abbott announced a legislative proposal Tuesday where any city that defunds police departments will have its property tax revenue frozen at its current rate.

Abbott, House Speaker Dennis Bonnen and Lt. Gov. Dan Patrick spoke out against the Austin City Council's decision to chop $150 million from the police budget during the news conference in Fort Worth.

“They will never be able to increase property tax revenue again if they defund police,” Abbott said from the Bob Bolen Public Safety Center. "Defunding the police puts Texans in danger and invites lawlessness into our cities, and cities that endanger their residents should not be able to turn around and raise more taxes from those same Texans."

“The people of Austin, Texas, deserve to be protected by police," Patrick said.

Bonnen said the Texas House will support this legislation in the next session.

Following George Floyd's in-custody death in May, people across the country have called for defunding police departments, including in Dallas and Fort Worth.

At a Dallas City Council meeting in June, callers asked elected officials to defund the police and reallocate the money towards community services.

On Aug. 7, Dallas City Manager, T.C. Broadnax told reporters that he wants to invest more in mental health services, while simultaneously keeping funding for the Dallas Police Department steady next year and increasing by $24 million in 2022.

Dallas Mayor Eric Johnson released a statement following Abbott's proposal saying that the city has seen an "unacceptable" increase in violent crime and called for investment in a "highly trained and well-led police department that emphasizes community policing."

"I personally believe we should look to defund the bureaucracy by redirecting portions of highly compensated government executives' salaries back to taxpayers or to programs and services that help make our communities stronger," Johnson said in the statement, in part.

Sen. Jane Nelson said at the news conference that she joins those who call for more funding for mental health and rape crisis centers, domestic violence shelters.

Abbott said the response to police brutality shouldn’t be to defund police, but to better train them.

“We need to take action to ensure the officers are trained in ways where they won’t engage in police brutality,” Abbott said. “It doesn't mean we cut back on law enforcement, it means we do a better job of training those police officers." 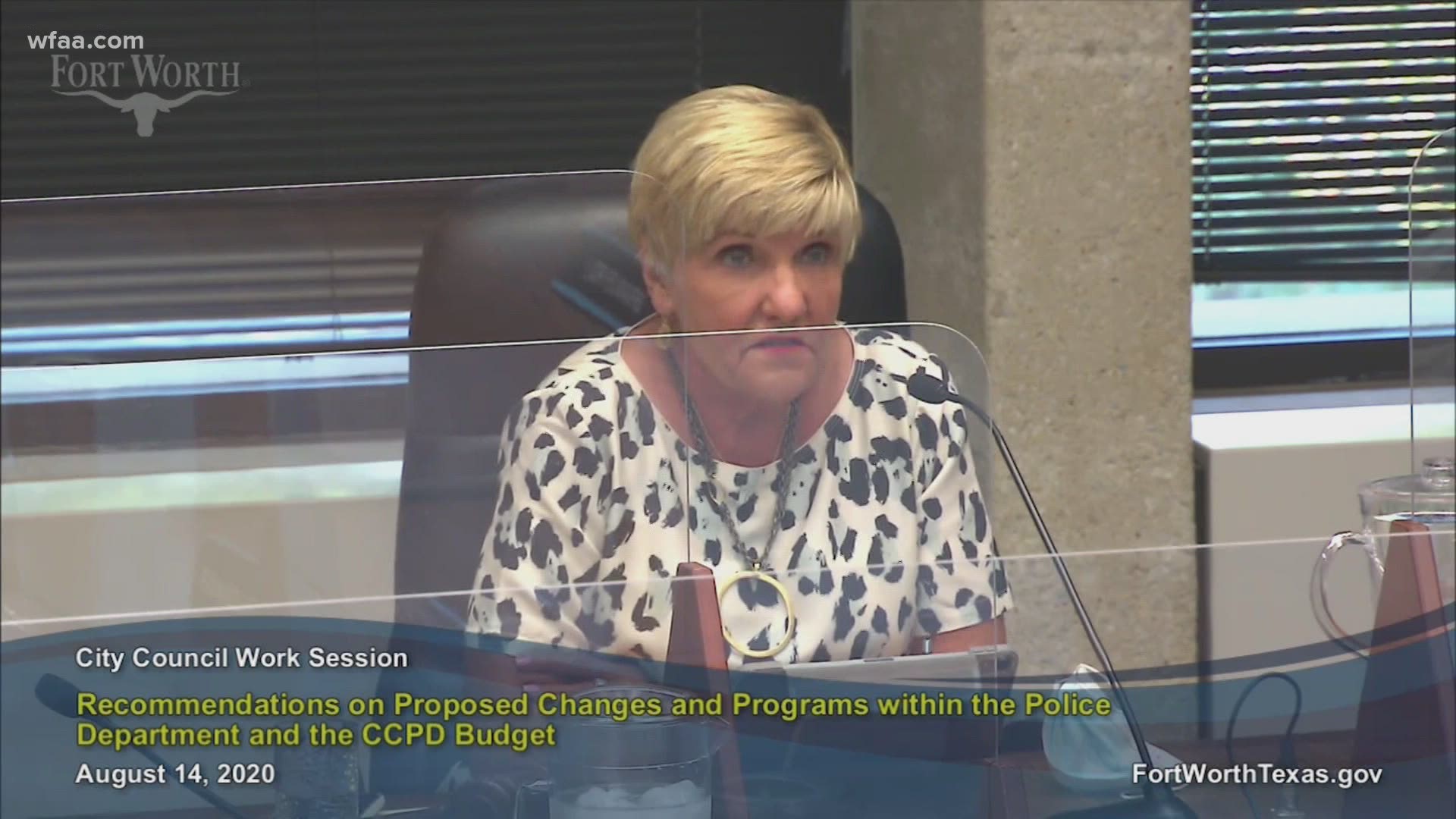 Passing such legislation may prove to be difficult.

Texas Sen. Nathan Johnson of District 16 in Dallas told WFAA that Republicans would have to maintain control of the Texas House of Representatives--something that Democrats are hoping to flip.

The margin for control is just 9 seats.

And even if the legislation passes, the state would likely face constitutional challenges from cities themselves.

At this point, the State of Texas can't dictate how a municipality balances its budget.

To add to that, Abbott said in his presser that if a city were to defund its police department and then would fall on hard times economically--it would still be unable to raise property taxes.

"This is political posturing and pandering," Johnson said. "What are we going to have each city submit their budget to the legislature annually to see if we approve of how they're spending it?"

"This is a city matter. We should leave it to the cities. If they're going to reallocate funds, that's up to them. Is it going to work? I don't know. That's why I didn't run for mayor and neither did they and they should respect the cities."