Callers asked the city council to defund the police and reallocate the money towards community services. 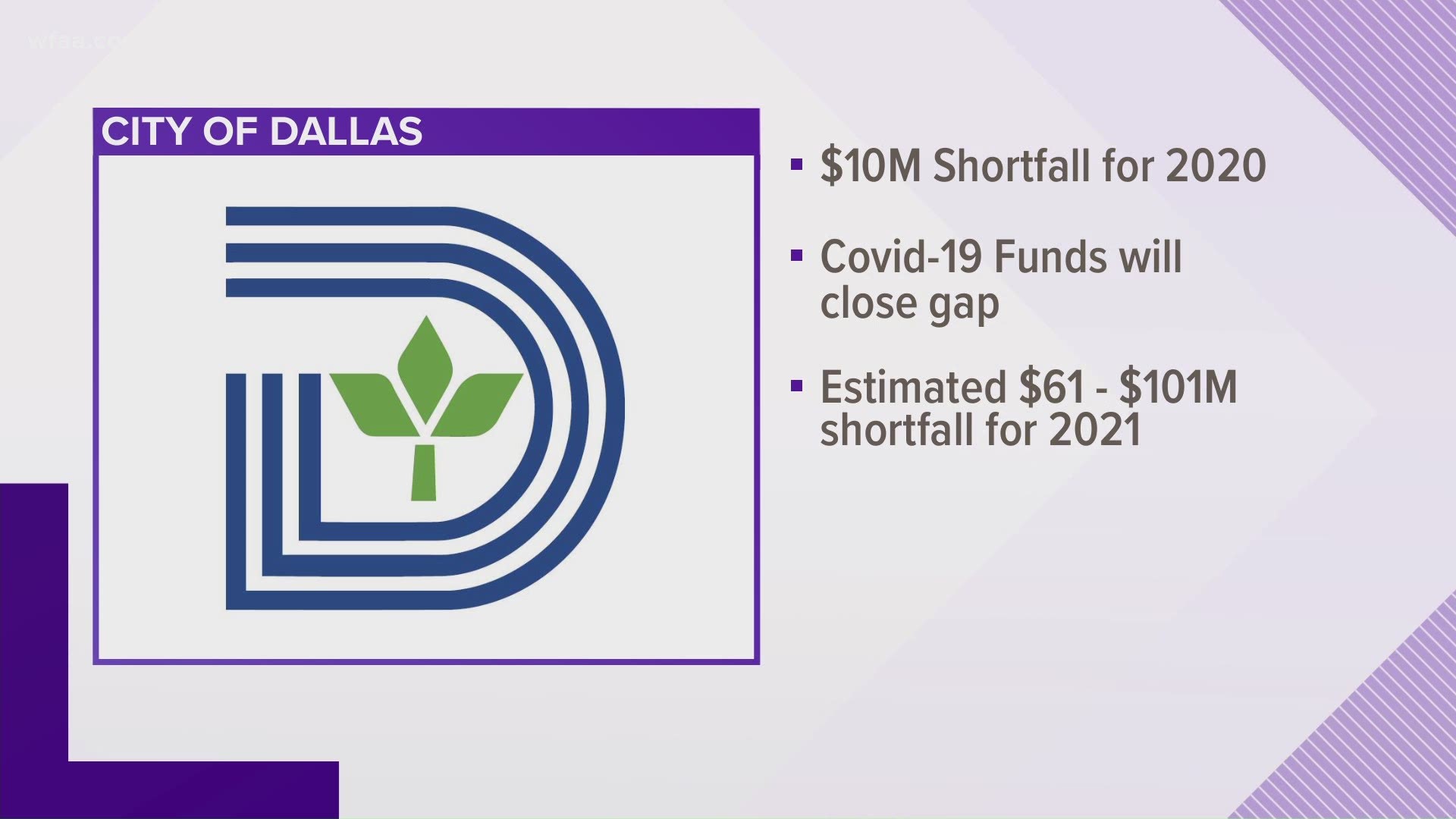 DALLAS — Dallas City Council members are faced with increasing pressure from the community to re-imagine the city's budget and move funding out of the police department while also balancing a potential budget shortfall after declining sales tax revenue from coronavirus closures.

Dallas has already furloughed hundreds of city workers through at least the end of July. In addition to citywide furloughs, Auditor Mark Swann sent a memo Tuesday night stating he has agreed to work with the city council to reduce his salary.

“I will work with the City Council to reduce the salary of City Auditor to whatever compensation level the council believes is reasons in the current financial environment,” Swann said.

During Wednesday morning's meeting, residents called in to express concerns regarding the city's budget shortfall and police reform suggestions.

A large number of callers asked Dallas Mayor Eric Johnson and the City Council to consider defunding the Dallas Police Department and reallocating that money to youth programs and community services.

Some of those suggestions included better accessibility to abortion clinics, public transportation, paid internships for the youth, and the removal of Shingle Mountain.

Several callers also asked that funding that would normally be used towards the Police Department, instead to put toward arts programs for the youth, which could help combat crime in the city.

One woman said she doesn't want to see policing budget cuts, because the department is still short-staffed.

"Good police officers are the only thing that stands between good citizens and violence," another caller said.

At the beginning of May, Broadnax announced 500 city employees would be furloughed through July 31 due to economic challenges brought by the coronavirus pandemic.

Reich said they may extend furloughs and are not sure if they will bring back workers before July 31.

Last week, Mayor Eric Johnson issued a memo to City Manager T.C. Broadnax, saying "all options should be on the table" when it comes to addressing budget shortfalls.

In the memo, Johnson asked Broadnax to consider “defunding” the bureaucracy to the greatest extent possible.

These suggestions included the following:

On Tuesday evening, Johnson posted another memo announcing that Swann has agreed to work with the city council to reduce his salary.

In the memo, Swann said he prefers any compensation reduction to consider a combination of furlough days along with an annual salary reduction to achieve the desires personnel cost-saving objective.

The auditor’s office has also eliminated two of the highest-paid positions in efforts of achieving the budget for the 2020-2021 fiscal year.

"These sacrifices aren’t easy, but I am pleased one of our council-appointed officers understands that our residents are hurting and that their needs come first," Johnson said.

During Wednesday's briefing, the public was able to view suggestions that were submitted by a few city council members in letters they recently sent to the city manager.