"I am proud of all that we have accomplished together to make Tarrant County among the most innovative and collaborative counties in the nation,” Whitley said. 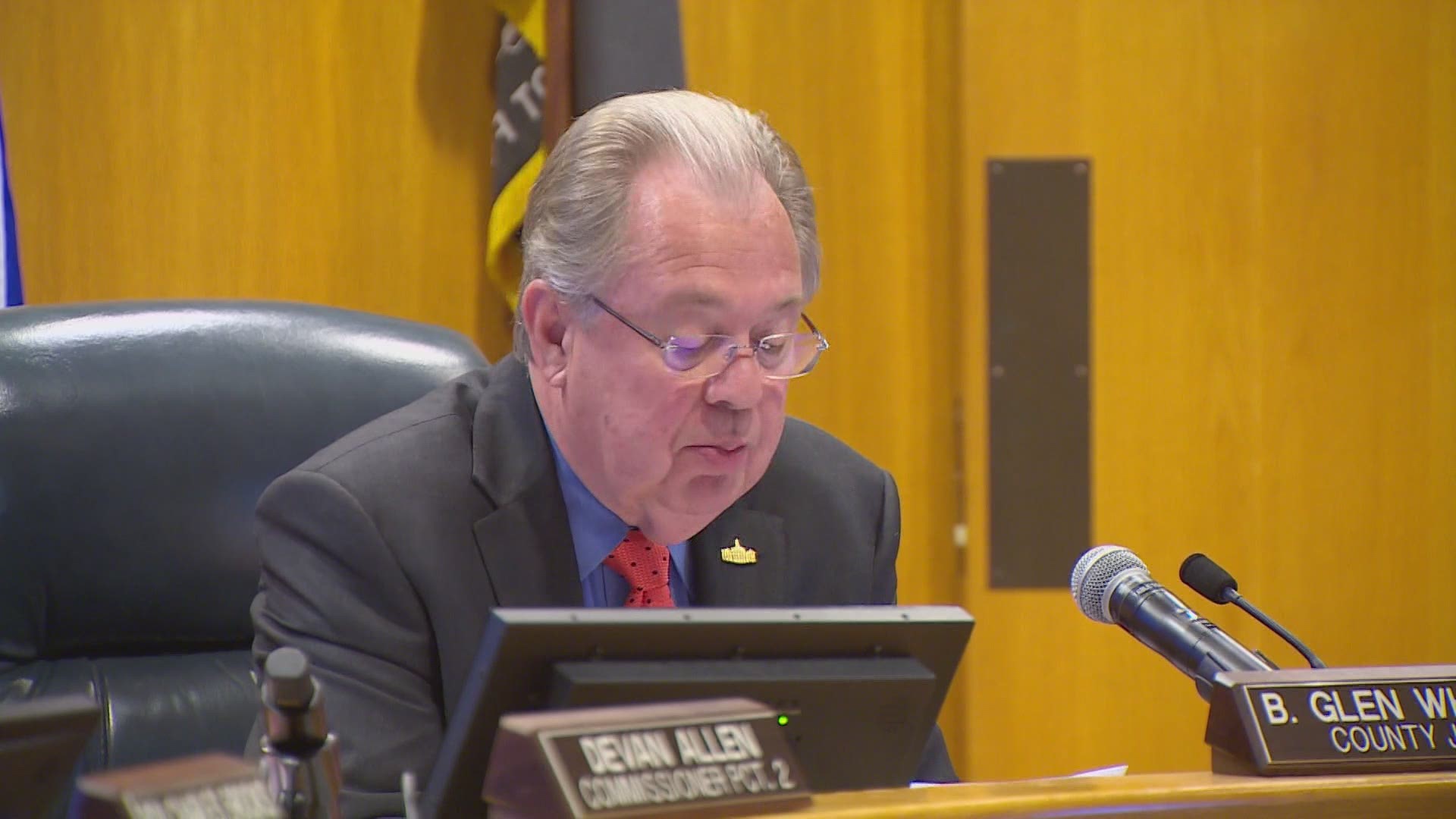 TARRANT COUNTY, Texas — After 15 years serving as the head of one of Texas' most populous counties, Tarrant County Judge Glen Whitley has announced he will not seek re-election for a fifth term in 2022.

“After much deliberation with fellow leaders, friends, and, most importantly, my family, I have decided that now is the time to prepare for the next chapter of leadership for Tarrant County," Whitley said in a statement Tuesday. "It has been one of the greatest honors of my life to serve my County and to do so alongside my fellow Commissioners."

Whitley had served in the role for the county since 2007 and previously served as Tarrant County Commissioner from 1997 until he became judge.

Prior to that, Whitley served as president of the National Association of Counties and of the North Central Texas Council of Governments, organizations that help local government develop policy, recognize regional opportunities and make joint decisions, according to his public biography. He also served as chairman of the Regional Transportation Council, the Texas Conference of Urban Counties, and the Public Employee Benefits Cooperative.

During his time working for the county, Tarrant County saw enormous growth. Its population has grown by nearly 62% since 1997, with more than 818,000 additional people now living in Texas' third largest county.

"I am proud of all that we have accomplished together to make Tarrant County among the most innovative and collaborative counties in the nation,” he said in the announcement.

Whitley may have faced some of his largest challenges in the role as he served as the county's head of emergency management over the past year during the COVID-19 pandemic. He told WFAA that the pandemic was not a deciding factor in his decision to not seek re-election.

Before his long career in government, Whitely co-founded in 1983 the accounting firm Whitley Penn, which now has offices in Fort Worth, Dallas and Houston. The Grand Prairie High School graduate earned an accounting degree from the University of Texas at Arlington and served in the U.S. Naval Reserve.

Whitley and his wife, Brenda, live in Hurst, Texas, have three grown children and seven grandchildren.

Whitley said he has not ruled out running for another elected office.

During a Tuesday morning public meeting, Tarrant commissioners thanked him for his service. Commissioner Roy Brooks said it was a "joy" to work with someone who could put political differences aside to get things done.

"You and I do not share a political persuasion but that has never kept us from being able to come together to make good decisions on behalf of the people of Tarrant County," Brooks said.

Commissioner Roy C. Brooks: "It has been a joy to serve with you on all your 26 years... You and I do not share a political persuasion but that has never kept us from being able to come together to make good decisions on behalf of the people of Tarrant County."#WFAA

The race to fill his seat will be held during the general election for the county on Nov. 8 in 2022. The race's primary will be about eight months before on March 1.

In a statement to WFAA, outgoing Fort Worth Mayor Betsy Price said she would not be making any declaration about a possible run Tuesday, but would have more later this week.

"Today, I simply want to thank my dear friend Judge Glen Whitley for his service to the more than 2 million people who call Tarrant County home," Price said. "Through significant growth and change, Tarrant County has thrived. That’s a credit to Judge Whitley’s vision, wise counsel and the passion and tenacity he brings to the job every day."

"In so many ways, Tarrant County, and our region, is a better place to live and work today than when we first elected him to preside as Judge. He’s given so much to our community, and for that we are grateful," she concluded.