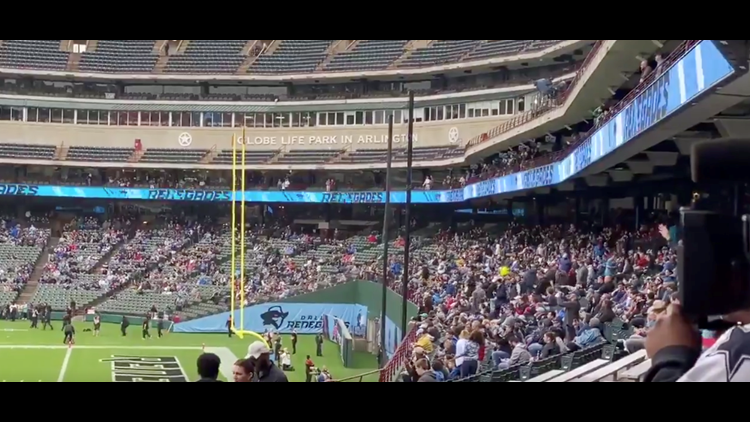 ARLINGTON, Texas — It was the beginning of a new era.

Sunday, an announced crowd of 17,206 watched the first-ever game of the new Dallas Renegades XFL team.

The Renegades lost 15-9 to the St. Louis BattleHawks, but the real highlight of the game wasn’t what happened on the field.

Thousands of fans showed up already wearing team gear, and the lines to buy the new shirts, jerseys and hats stretched around the concourses.

“The people here. The energy is crazy,” Jude Pettit, who’s already bought season tickets, said. “I thought there’d be a little less and then we got here, and the parking lots were packed out.”

Despite rain, people flooding into Globe Life Park. With AT&T Stadium empty, just seeing football was a big draw for many.

“I think the turnout is actually way more than I expected and I think they did an awesome job marketing it,” Kaleigh Kinder said.

“Texans love their football so after the season ended for the Cowboys, why not?” Jeannetta Futrell said.

Toni and Ronald White drove five hours from Oklahoma, part of a large group of fans who came to cheer for quarterback Landry Jones and coach Bob Stoops.

“We’re ready. I like the prices and also the team uniforms,” Ronald White said.

“I love football, so, yes, for me, that was huge,” Toni White said.

Despite the loss, it was a win for the XFL and the Renegades to create new excitement and begin to build a fanbase.

“If you missed this game you need to come out for the next game,” Futrell said. “The atmosphere is electric.”