How much will Donald Trump’s Dallas campaign rally cost the city?

It’s unclear whether the city expects to be reimbursed for costs incurred during campaign event. 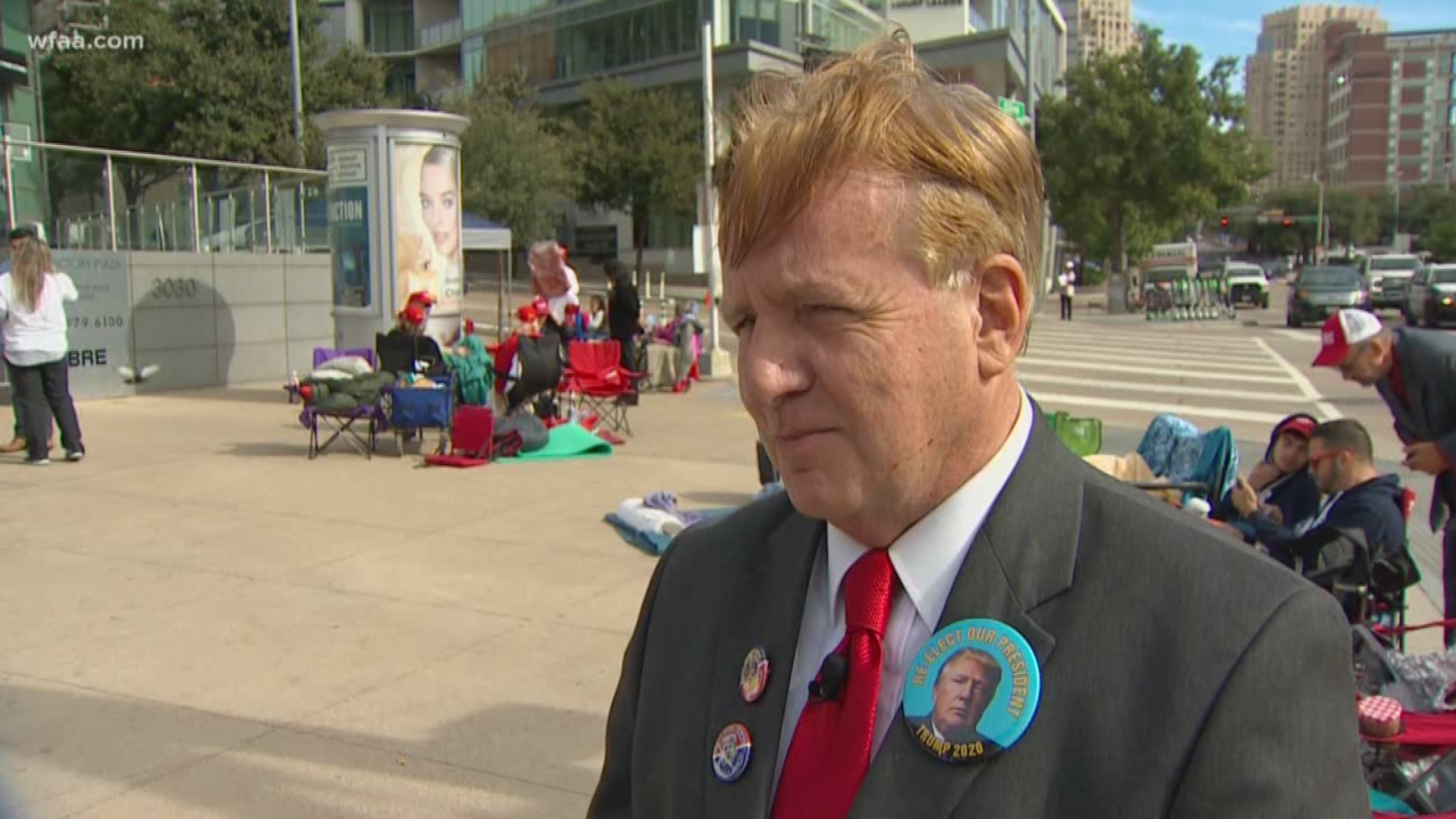 DALLAS — Have you ever been 54 hours early for anything?

Richard Snowden flew in to Dallas at noon Tuesday and by 2:15 p.m. he had set up his folding chair to stake out his place in line outside the American Airlines Center.

“I’m from Denton and I’ve got a friend flying in from California, a gal I met up in Wisconsin – she’s flying in later today,” said Dave Thompson, wearing a signature red hat and a Trump pin on his suit.

Snowden was first and Thompson was second in a line that was slowly but steadily growing on Wednesday afternoon, with Trump supporters eagerly passing the hours talking, tossing a ball and taking pictures.

Erin Perrine, the deputy communications director for Trump 2020, said they see similar enthusiasm at every rally in every city and state they visit.

Based on its configuration for the rally, American Airlines Center chief operating officer Dave Brown said the arena will likely hold about 20,000 people.

But Perrine said a large overflow crowd is expected outside on the plaza, where a live band, food trucks and a video feed from inside the center will keep them entertained.

RELATED: Donald Trump and Beto O'Rourke are coming to North Texas at the same time. Here's what to expect

Keeping the rally-goers and the protesters and President Trump safe comes with a cost.

While he will be in North Texas for much of the day on Thursday, his visit to a new Louis Vuitton factory in Johnson County will be in his official presidential capacity.

But his appearance in Dallas at the American Airlines Center is as a 2020 candidate, and the cost to the city is unclear.

“The city of Dallas does not charge heads of state for the security measures necessary to accommodate their visits," a city spokesperson explained on Wednesday afternoon, adding that she was still looking into the potential cost for a visit like Thursday's.

When asked whether the campaign reimburses city or county governments for costs incurred during campaign visits, a Secret Service spokesperson said, “the Secret Service cannot speak to the conditions surrounding the mechanisms in place for reimbursement to local law enforcement agencies.”

A recent study by the Center for Public Integrity found some 2020 candidates from both political parties have been slow to reimburse cities for costs incurred during visits, but the Trump campaign has the largest number of unpaid bills – more than $840,000 worth - from 10 U.S. cities.

“Well, that’s an unfortunate byproduct of all this,” Snowden said, “but I think it’s great that the President gets out and visits the people and travels the country. That hopefully helps him keep just that much more in touch.

The American Airlines Center said the Trump campaign signed a contract and had already paid its bill for renting the facility. While Brown said he could not reveal the exact cost, he said it is comparable to other private events.