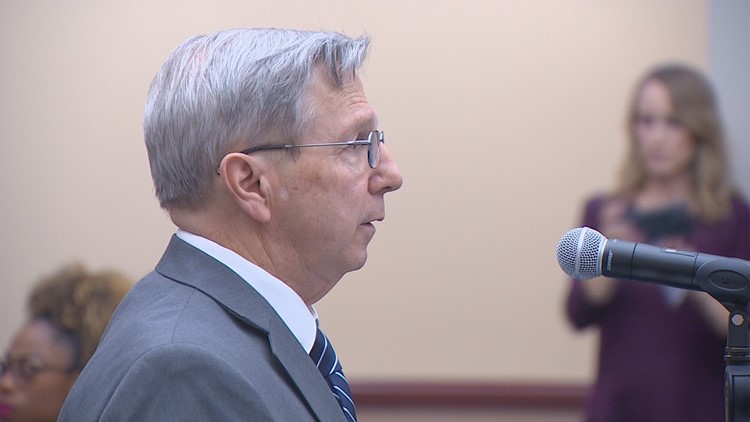 DALLAS — The Dallas Independent School District’s chief auditor who accused the school board of trustees of deflecting financial problems by attempting to "investigate the investigator" planned to resign in late February, WFAA has confirmed.

DISD Chief Internal Auditor Steven Martin defended himself in front of trustees at an audit committee hearing Tuesday when he was subject to a sudden peer review.

Though Martin planned to resign Feb. 28, WFAA was told he was escorted from the main DISD building and told he could get the rest of his things Friday.

The controversy surrounding Martin and his resignation comes while Dallas ISD has asked taxpayers for the largest single bond in state history, from a total of $2.7 billion to $3.7 billion.

Martin's decision as a top DISD employee to speak during public comment is unprecedented.

His comments came on the heels of two audits that showed the district potentially overpaid more than $330,000 for $1.2 million in construction contracts. One of the audits called for DISD to refer the potential overpayments to the Dallas District Attorney’s Office for criminal prosecution.

His office is reviewing another nine contracts, with $1.7 million in potential overpayments, Martin said.

The status of those audits and Martin's alleged findings are now up in the air.

WFAA learned he is not in charge of releasing those audits as of Thursday.

“What concerns me is the reason for an early peer-review and who will do it,” Martin told those in attendance at the committee hearing Tuesday. “As a federal investigator for 24 years, I understand when a case against a defendant is airtight, defense attorneys investigate the investigator. I feel this is happening now.”

Dallas ISD trustees released a lengthy statement Thursday afternoon that reads in part, "We cannot comment on the personal motivations of Mr. Martin for this decision."

Though trustees didn't comment on why Martin resigned, they now are challenging his credibility. It's something, that didn't happen when Martin spoke out earlier this week.

"The board has since received serious allegations regarding the validity of the Internal Auditor’s methodology and the accuracy of the calculations," the statement read.

It goes on to read, "To clarify, Mr. Martin did not discover the overpayment issues with these contracts and was not being prevented from investigating them. Because these matters are under investigation, further comment is not appropriate."

The statement also pointed out that irregularities and troubling findings were sent to federal law enforcement, but did not mention if state investigators have been contacted. A number of the audit findings involved possible violations of state law.

In addition, the statement does not mention if the district is actively attempting to regain any overpayments.

It also didn't explain if key or major vendors, who may have accepted potential overpayments, will be allowed to continue to work with the district, or if they'll be asked to repay any inflated bills.

Martin, who has been an accountant for 35 years, including 19 years as a supervisor for the Drug Enforcement Administration, could not be reached for comment.

RELATED: Auditor who found Dallas ISD overpaid contractors tells school board to not 'investigate the investigator'

His resignation comes when his office is expected to release up to a dozen audits this month.

The audit committee met for nearly three hours in closed session Tuesday to discuss issues surrounding the chief auditor and decided to go ahead with the peer review.

Trustee Joyce Foreman, though not an audit committee member, sat in the closed-door committee hearing. She said she was troubled by Martin’s resignation.

“I’m very surprised,” Foreman said when reached for comment. “I want to make sure we get to the bottom of what happened in the internal audit’s office.”

"If he (Martin) found issues where people have taken the public’s money, we need to get it back,” Foreman said. “I ran on integrity and want to be responsible for the money that is spent.”

Last month, Martin raised concerns about a Dallas ISD proposal to limit the ability of his office to review smaller construction contracts, according to an email obtained by WFAA.

“I believe the (DISD) administration is trying to cover up the violations of law and policy,” Martin explained in an email obtained by WFAA.

Martin said in the email that he was concerned the school district may have tens of millions of dollars in potential overpayments for more than 400 similar contracts from 2015 to 2018. He said he was concerned it may be due to a failure to follow pricing restrictions and guidelines.

“If the average overpayment of the 447 contracts is $150,000, the total loss to the District would be over $67 million,” Martin wrote in an email on Jan. 10 to Nancy Rodriguez, a Dallas school board trustee candidate.

In his statements Tuesday, Martin indicated that the timing of the review was suspicious. He said school district management wanted third parties to review his previous five construction audits.

“Why is the audit committee and management both bringing in third parties to review our audit reports at this time? And why did the administration try to change policy preventing internal audit from investigating vendors?” Martin said.

Martin, while before the committee, then appeared to ask trustees to let him do his job.

“Internal audit has been highly effective,” Martin said. “However, we cannot continue to be without your support. Calling for a peer review two years early demonstrates management and the district’s vendors a lack of confidence in internal audit.”

“Nobody has demonstrated that we got any audit reports wrong,” Martin said. “If we did, we would fix them."