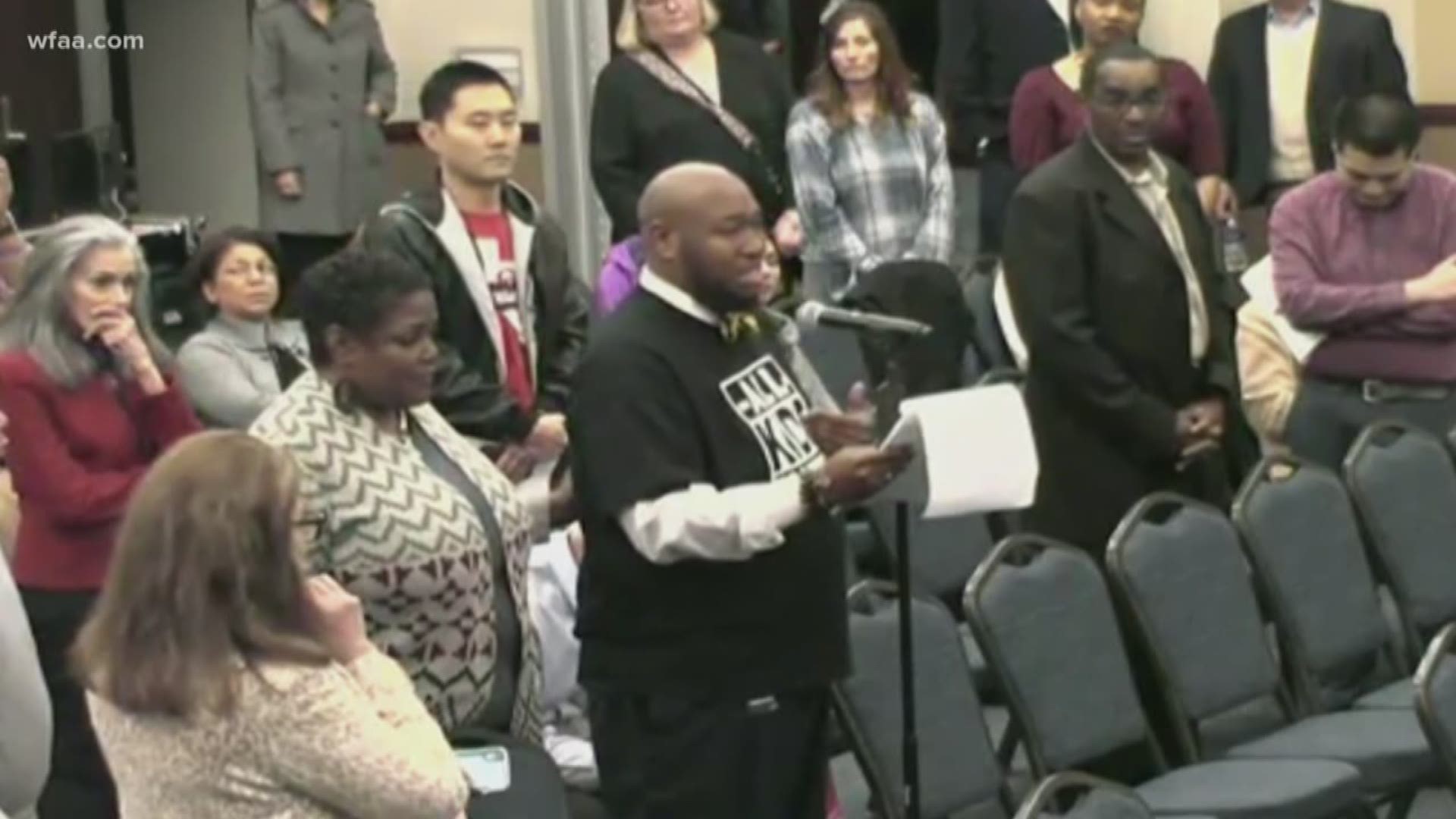 DALLAS — A trustee with Dallas Independent School District is publicly addressing concerns about guns and safety in schools.

On Thursday, District 5 Trustee Pastor Maxie Johnson was dressed in an "All Kids Matter" T-shirt, when he stepped up to the microphone during the public forum portion of the school board meeting.

"My heart is heavy, tonight because we have too many kids getting killed behind senseless gun violence," Johnson said.

In his statements, Johnson began publicly calling out Superintendent Dr. Michael Hinojosa for allegedly failing to follow-up with him, directly, about some safety and security concerns.

The public statements came days after the death of 18-year-old Marc Strickland. The teen was shot multiple times on Jan. 11 after a fight during a basketball game inside Dallas ISD’s Ellis Davis Field House.

A Dallas ISD police officer was grazed by a bullet. Police believe a 15-year-old boy was the shooter.

"I am sorry that the parents have to feel what I feel every night when I go to sleep knowing that my son is no longer here," Johnson cried.

The trustee reminded members of the board and the public he knows the pain of dealing with family members who have fallen victim to gun violence.

One of Johnson’s sons was killed in the summer of 2019.

During his public comments, Johnson accused the superintendent of failing to respond to an email he sent nearly three months ago. In that email, Johnson asked about metal detectors and guns getting into schools.

"On September 30th, at 3:57 p.m., I emailed our superintendent and informed him that a student got into South Oak Cliff High School with a gun, after shooting it at the Exxon across the street. My question was asked, ‘How did this student get in our facility with a gun?’ You did not even respond to my email. And it's in January, and I still haven't received a response," Johnson told the trustees.

"It is sad when a Trustee can't receive proper communication or a response when it comes to kids' safety," Johnson said.

“In response to the inquiry, yes, Dr. Hinojosa did receive the email and directed his Chief of Police to respond, which Chief Lawton did that same day. Trustee Johnson also acknowledged the response from Chief Lawton. In addition, subsequently, Chief Lawton and Trustee Johnson had several conversations. Dr. Hinojosa relies on his senior leadership, who are most familiar with any given inquiry, to handle the matters under their purview to respond to Trustees. In a large organization, such as Dallas ISD, it’s imperative to have a timely response from the leaders who are most directly responsible for the critical issues that arise. In an effort to provide the most accurate information and in an expedited manner, Chiefs are expected to address Trustee concerns and to follow up. Chiefs are also obligated to keep the superintendent informed and, when appropriate, to inform the rest of the board.”

Johnson is firing back at the statement Dallas ISD released.

"The Superintendent didn't have a problem speaking to me before extending his contract. After his contract was extended the communication stopped," he said.

Since the game night shooting, the school district has updated security measures at sporting events.