“I believe the administration is trying to cover up the violations of law and policy…” the auditor explained in an email, responding to a query. 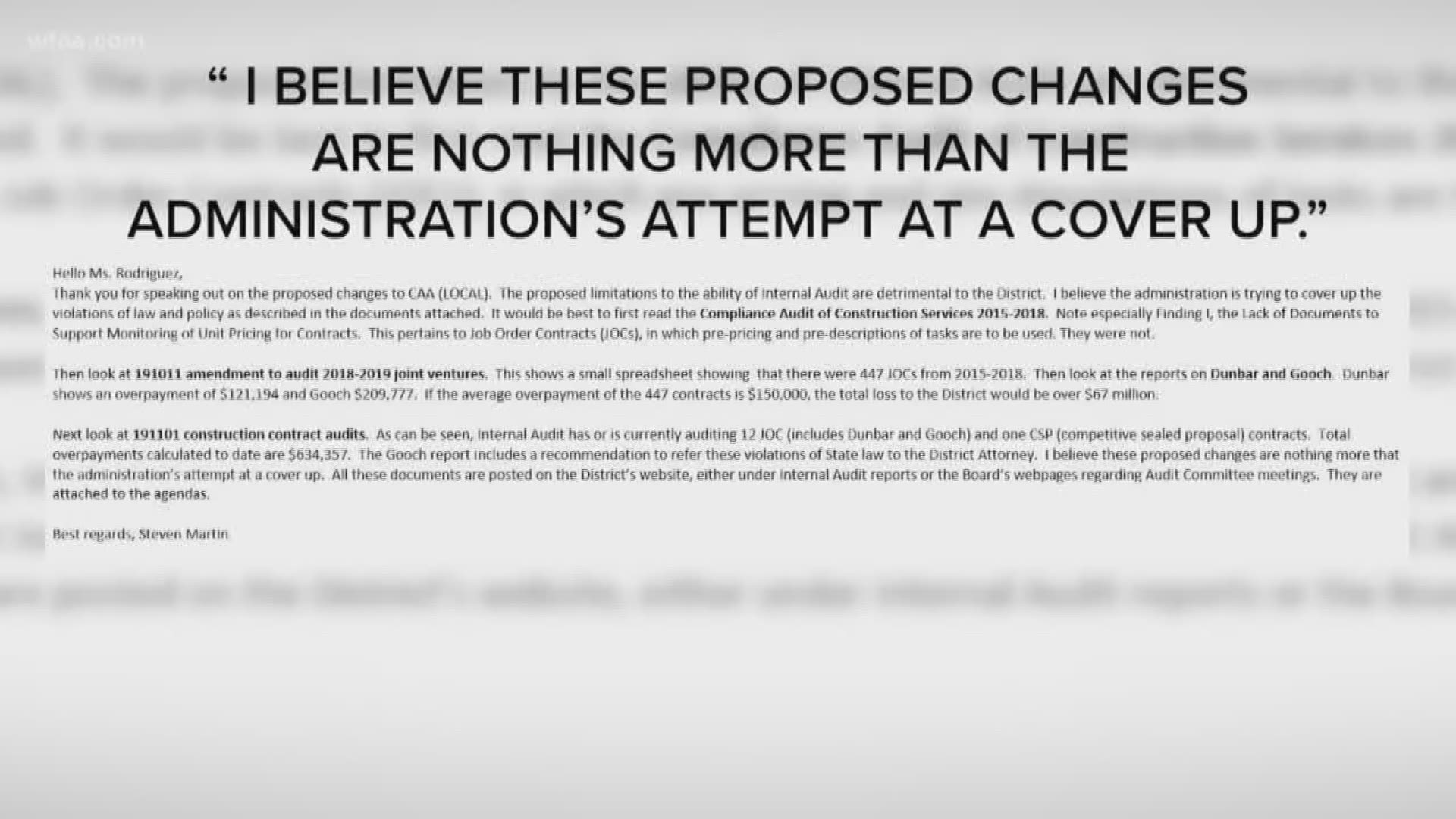 DALLAS, Texas — The Dallas Independent School District chief auditor is under a performance review within a year of his hiring — and soon after he questioned the district’s performance in millions of dollars of potential construction contract overpayments.

One of the audits called for the district to refer the potential overpayments to the Dallas District Attorney’s Office for prosecution.

Martin also raised concerns about a Dallas ISD proposal last month to limit the ability of his office to review smaller construction contracts, according to an email obtained by WFAA.

“I believe the administration is trying to cover up the violations of law and policy…” Martin explained in the email, responding to a query.

Martin said he was concerned the district may have tens of millions of dollars in overpayments for more than 400 similar contracts from 2015 to 2018. He’s concerned it may be due to a failure to follow pricing restrictions and guidelines.

“If the average overpayment of the 447 contracts is $150,000, the total loss to the District would be over $67 million,” Martin wrote in a Jan. 10 email to Nancy Rodriguez, a Dallas ISD trustee candidate.

District officials said: “The administration works closely with the Board to ensure audits are reviewed and actions are taken to ensure compliance with all applicable laws and Board policies.”

Officials said the maintenance department that was the subject of the two recent audits has been disbanded and “many of the individuals cited in the audits no longer are employed by the district.”

WFAA reported last year that several individuals involved in the questionable transactions were no longer employed by Dallas ISD. But Dallas ISD had not previously said if any of the cases were referred for prosecution.

Martin was hired a year ago after WFAA reported allegations by whistleblowers that Dallas ISD staff had deliberately split bids to evade the need for competitive bids and school board oversight.

By avoiding public bids through “sequential purchasing,” the whistleblowers claimed they feared taxpayers were not getting “the biggest bang for their buck.”

They found DISD officials would award in-house job order contractors and vendors by separating the projects into two or more smaller projects. Because each project was under a $500,000 cap, it did not trigger competitive bids and board approval.

Now, Martin is facing a job performance review, and his staff is facing a peer review two years early.

The review also comes while Dallas ISD has asked taxpayers for the largest single bond in state history, from a total of $2.7 billion to $3.7 billion.

“Sometimes you’re not a good fit, and I get that,” Foreman said. “But I want to understand why some of the trustees feel like he’s not a good fit.”

Nancy Rodriguez told WFAA she spoke out at a January committee hearing against a motion to enact greater limitations on the Dallas ISD internal audit team.

“Any fraud that was under $250,000 would not be considered significant and that it would not go to the audit department, (rather) it would go to the office of professional standards,” Rodriguez said. “I thought that was a bad move, so I went to the board briefing and spoke out against that policy.”

Martin spoke with Rodriguez when she left and thanked her.

“He said that everything I said was on point and that he had the same concerns,” Rodriguez recalled.

She said she contacted Martin a few days later and received an email from him further detailing his concerns.

“I was blindsided, I was really surprised,” Rodriguez recalled upon receiving the email.

When contacted by WFAA, Martin declined to comment on the email or upcoming committee hearing.