The Dallas city manager has asked the chief to stay through the end of the year. She agreed after initially planning to step down Nov. 10. 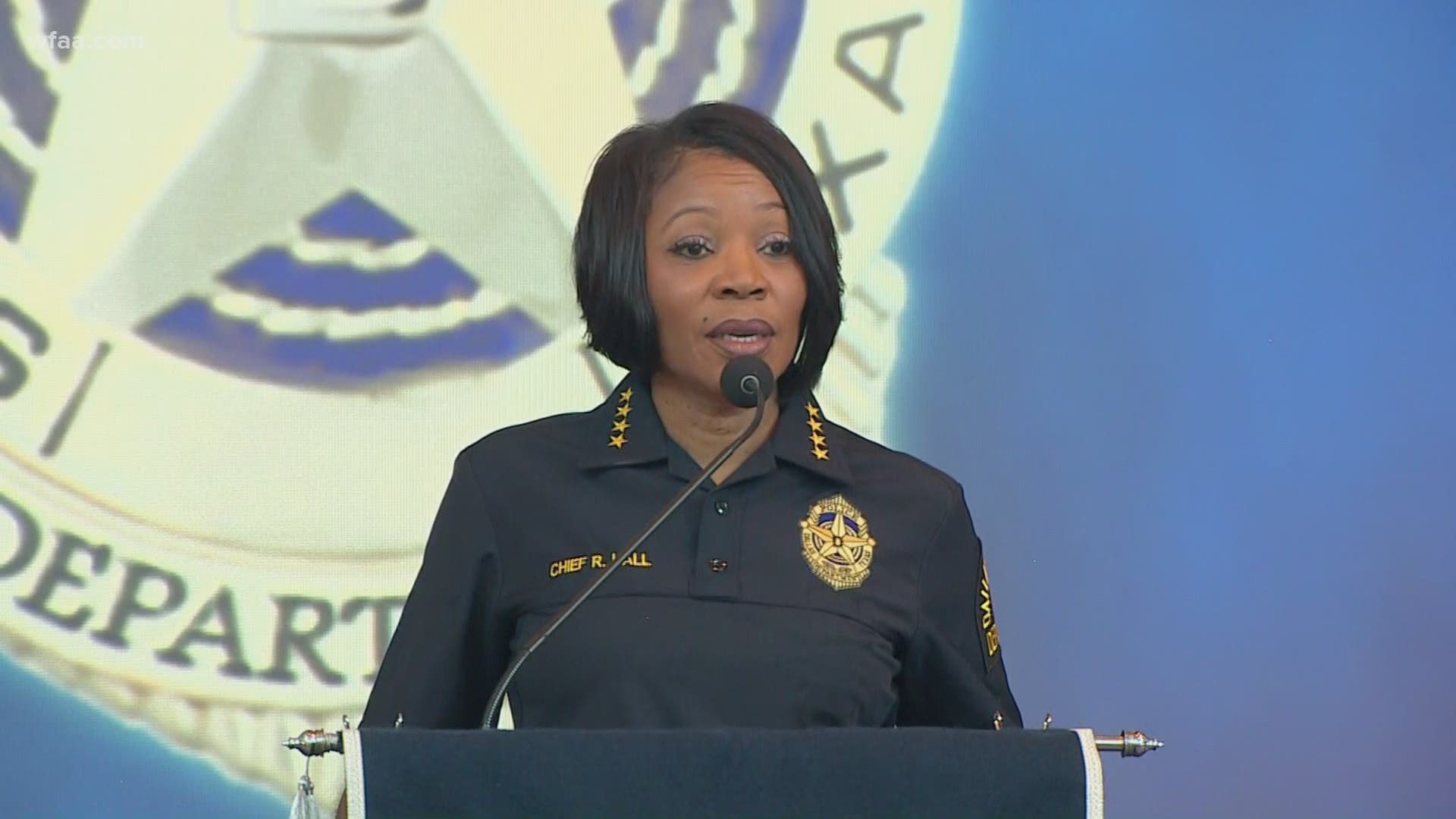 Reneé Hall is resigning as the chief of police of the Dallas Police Department, city officials announced Tuesday.

Hall's resignation goes into effect at the end of the year. She initially said she would resign Nov. 10, but Dallas City Manager T.C. Broadnax asked her to stay longer.

In her letter of resignation, Hall wrote that she has received inquiries about "future career opportunities" in recent months.

"As you can imagine, for many reasons, I must keep my next career step confidential," Hall wrote in the letter, which WFAA obtained Tuesday afternoon.

Hall has been chief of the Dallas Police Department since 2017. She is the first woman to lead the department.

Hall wrote that she remains committed to her "true calling, which is law enforcement." 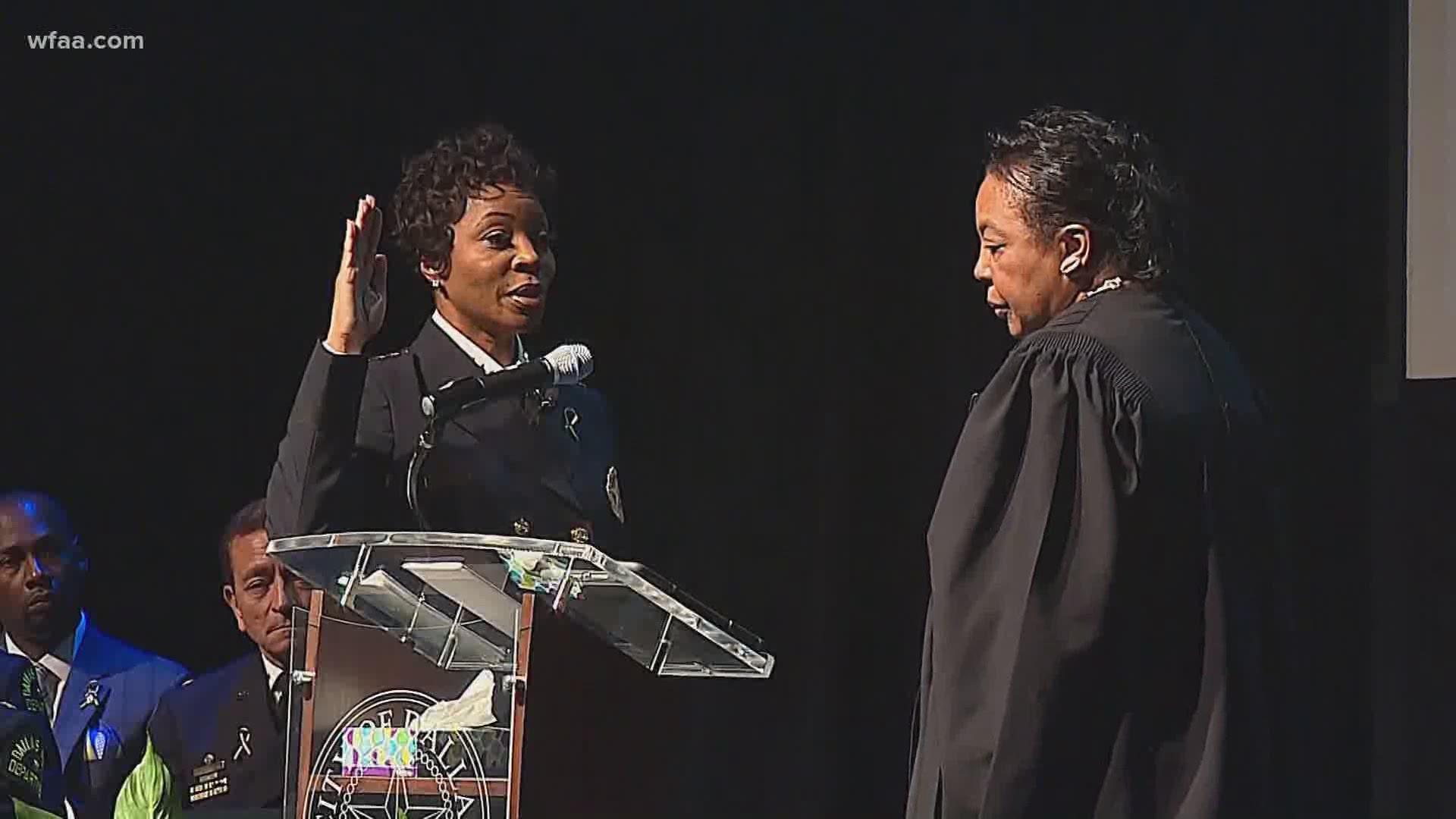 In the letter, the chief said she was grateful for the opportunity to work in Dallas, even as the police department faced challenges.

"We have accomplished so much by standing together in support of community policing and changes in the way our officers perform their duties in 2020. It has not been easy," Hall wrote.

The chief referenced changes she made in the police department in recent months. In response to protests for police reform, Hall created a policy requiring officers to intervene if they see wrongdoing. She also said body camera footage should be released 72 hours after an incident involving a police officer.

"I am proud that this department has not only coped with an unthinkable series of events, but we have also managed to implement critical reforms that were clearly needed for the Dallas Police Department to meet our 21st Century policing goals," she said.

The chief's resignation comes weeks after she came under fire for her handling of protests in Dallas after the death of George Floyd in Minneapolis police custody.

On one night of demonstrations, protesters were boxed in on Margaret Hunt Hill Bridge. Hall said more than 600 people would be arrested and charged with a misdemeanor for blocking a road.

She later said the police department wouldn’t file charges against the protesters.

Dallas City Council members critiqued Hall’s leadership during the four-day period of large protests in the city. When the council discussed the final report, they asked her to grade herself and Hall gave herself a C- for her handling of the situation.

“After all of this review, it was clear to me, we had a failure of leadership,” Deputy Mayor Pro Tem Adam McGough said during an August committee meeting.

Dallas Mayor Eric Johnson said in a statement Tuesday that he was not surprised to hear of the resignation.

"I want to thank Chief Hall for her service to the City of Dallas. I had not spoken to the chief about her decision, but I was not terribly surprised by it considering the recent public statements of my City Council colleague," Johnson said.

The mayor said a lot is asked of leadership in law enforcement.

"On top of those demands, Chief Hall had the burden and the distinction of being the first woman -- a woman of color, no less -- to serve as the police chief in Dallas," Johnson said. "That was not lost on me. I wish her the best in her career and in her life moving forward."

“The fact that it’s been this long and some of these statements have been allowed to linger has been damaging to our transparency,” Councilmember David Blewett said, adding that the false information was passed along to their constituents.

When the department’s handling of the protests wasn’t at the front of the conversation, it was the city’s crime rates. The 2019 calendar year was Dallas' deadliest since 2005.

In January, Hall debuted her Crime Reduction Plan and said reducing crime is what “what we're about in 2020.” The plan was to reduce violent crime by 5%, something the mayor and councilmembers said didn't go far enough.

Other violent crimes rose in 2019 as well. There was a 14% increase in robberies and a 19% increase in aggravated assaults, the statistics show.

Born and raised in Detroit

Hall was born and raised in Detroit and spent 18 years with the Detroit Police Department. Before being appointed police chief in Dallas, she was Deputy Chief with Detroit police.

“My favorite part of the job is helping the citizens, taking care of the officers, making sure they’re happy. Can’t make them happy with every single thing, but just being in a position being able to give them some of the things they want. And then make a better quality of life for the citizens. That’s the part that really drives me, knowing that I have the ability to do that, it’s exciting,” Hall said in an interview with WFAA before her move to Dallas.

During Hall’s nearly three years with the department, organizations have demanded that she be fired. She’s been criticized for her leadership and increase in violent crime.

The chief has also received staunch support. Some said she wouldn't have been as criticized if she weren't Black or a woman.

"I am convinced that if the police chief was of any other gender, or any other hue, we would not have this great critique of her work," said the Rev. Michael Waters last year.

The chief took a month-long leave of absence last July. The department said Hall had surgery for a health issue she learned about in January.

The chief's absence came at a time when she was facing criticism from local police associations, including the National Latino Law Enforcement Organization and the Combined Law Enforcement Association.

Then in June 2019, the president of the National Latino Law Enforcement Organization and the Combined Law Enforcement Association held a news conference to call for the termination of Hall.

He said Hall was never qualified for the job, which requires someone with seven years of experience as a chief. Hall had three years when she was hired. Aranda said the department needs new leadership.

The Dallas Black Police Association came to her defense.

It partially read: “I am confident that Chief Hall and the dedicated officers of the Dallas Police Department are focused and committed to ensuring that the safety of our residents is a top priority.”