Minority groups are being vaccinated far below their population rate and wealthy communities are receiving far more doses than poorer ones. 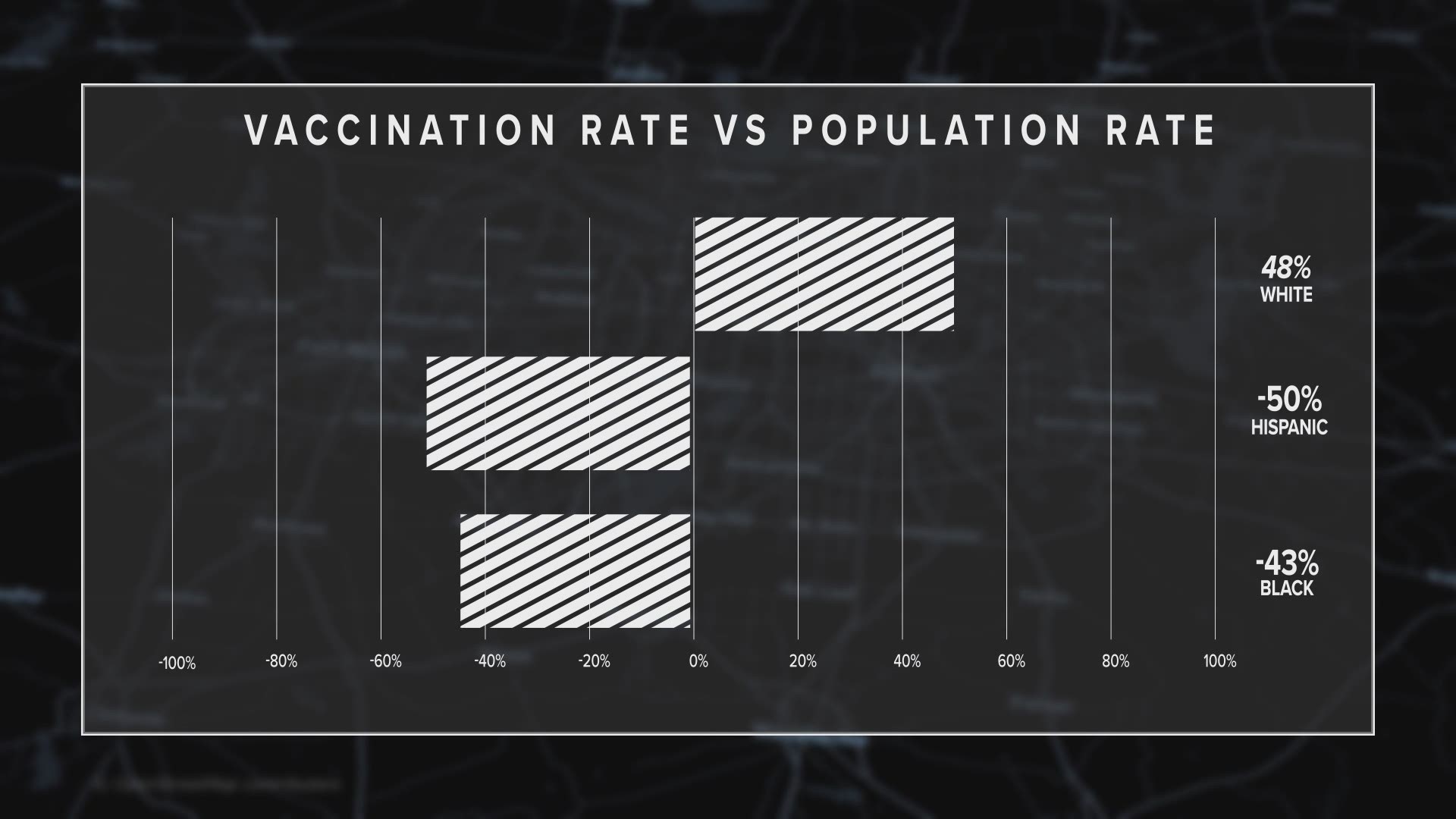 FORT WORTH, Texas — COVID-19 may not have created all of America's problems, but the spread of the disease and the response to stop it has exposed and magnified existing inequalities.

The data can be overwhelming and tough to sift through. Daily cases, deaths, hospitalizations and vaccinations are sorted by everything from location to age, race and gender.

Organized and taken together though, they tell a simple and old story: Disadvantaged and minority communities are hurting the most but getting the help the slowest, which in this case, is vaccinations.

The Texas Department of State Health Services (DSHS) began releasing weekly updates to vaccine ZIP code data on March 2. Combined with US Census Bureau data of population and median household income, the vaccination gap becomes apparent. Some new ZIP codes and others with zero listed population have still received vaccines. The latest state update showed 3,401 first shots going to 78599, 1,412 to 75005 and 6,580 to 75033.

That may not tell the full story, though, because much of the poorest population lives in or around border towns and may not be counted in census data but still receives vaccines, skewing the rate higher.

Put another way, the average median household income for the most vaccinated 1 percent of the state is $121,340 and the least vaccinated households are bringing home $46,568.

Frontline healthcare workers were the first group eligible in Texas' 1A group. State officials estimate there are 1.5 million people eligible in that group and up to 14.4 million total eligible now between all groups with some overlap.

Lack of equity in vaccinations

“Some of this is, you know, not ill will. I think is structural,” said Richie Butler, the senior pastor at St. Luke Community United Methodist in Dallas. “Unfortunately, life is not fair, and I think it's quite evident from who's received the vaccines and who's sort of been left out.”

Butler believes the planning for vaccinating started too late.

“You would assume that you have a game plan that would sort of effectively level the playing field,” he said. “We knew when this pandemic hit us that people of color, African Americans, Latinos would be disproportionately impacted.”

Part of the issue is education.

Malik Caruthers and his mom came to Antioch Fellowship Missionary Baptist Church for a food box this past Sunday and didn’t know he could register for a vaccine until volunteers signing people up at the church approached them. Waitlists have been available for months.

“I feel good. You know, a lot of people don’t have the opportunity to do this,” Caruthers said.

In University Park’s 75225 ZIP code, where the median household income is $161,296, nearly 39 percent have received at least one shot.

In 75210, though, which includes the actual Fair Park vaccination site in Dallas, the income drops to $28,269 and the vaccination rate plummets to 7 percent.

The same story is playing out across the state.

“The story of health care in America is a story of health disparities,” Tarrant County Commissioner Roy Charles Brooks said. “The numbers indicate a lack of equity in the vaccination process.”

Brooks said the county has tried increasing vaccine registrations and provide resources to underserved communities including phone signups instead of online-only but believes outreach so far hasn’t made the impact he wants.

“It is not working to the extent that we have not been able to move the needle in a significant way,” he said.

In Colleyville’s 76034 ZIP code in Tarrant County, the median household income is $163,315 and more than 27 percent of people have received at least one vaccine dose.

Down the road in Fort Worth’s 76105, though, where the income is $32,396, the vaccination rate is 8 percent, even though Tarrant County Public Health data shows the COVID-19 death rate is twice as high there than in Colleyville.

WFAA shared information regarding the gap with federal officials during a White House COVID-19 media briefing.

“The statistics that you share are very concerning to us. We know that we still have a challenge in terms of data,” said Dr. Marcella Nunez-Smith, director of the White House's COVID-19 Health Equity Task Force. “Groups should be vaccinated at the rates in their population. That’s our target and our goal.”

RELATED: Dr. Fauci explains why getting your second Pfizer, Moderna shot is important for COVID-19 variants

Data shows disparity in who is getting vaccinated

While data is partially incomplete, known race data in Texas paints a clear picture of inequality.

Across Dallas, Tarrant, Collin, and Denton Counties, the average vaccination rate for residents classified as white (non-Hispanic or Latino) is 47.5 percent higher than their average population share according to state and federal data.

At the same time, Hispanics are being vaccinated an average of 50 percent less and Black residents are vaccinated 43 percent less than their population share across the four counties.

Some major providers have even wider gaps.

Four percent of people vaccinated by Denton County are Black, but Black residents make up 11 percent of the county’s population, almost three times the level they’re being vaccinated at.

According to DSHS data sent to WFAA, at the end of February, Denton County Public Health had vaccinated 35,172 white people compared to 134 people who are Black.

County health director Dr. Matt Richardson said in a phone call the county is going in order of who signed up first and can’t prioritize certain groups because of state rules.

“The hub providers must have public-facing vaccination that serves people across the 1A and 1B populations, but they can and should also ensure they’re vaccinating people from the hardest-hit communities,” a DSHS spokesperson said. “That could be done by setting aside some doses to focus on people who live in certain areas or prioritizing a subset of age groups along with their other efforts.”

RELATED: Nearly a year into the pandemic, grocery workers in Texas are more fatigued than ever as they await vaccine access

Seven percent of Tarrant County residents vaccinated are Hispanic, but they make up nearly 30 percent of the county.

State provider shows Tarrant County Public Health sites have vaccinated 68,897 white people compared to 563 Hispanic people. County officials say that data is not an accurate depiction of their efforts because some names from its waitlist are shared with other providers in the county.

“There is considerable outreach to be done,” Brooks said.

The county has engaged UNT Health Science Center to reach out to underserved communities to increase sign-ups and take vaccines directly to those who need them.

At Baylor Scott & White – Plano, 82 percent of vaccines are going to white people.

State data shows Dallas County Health and Human Services and Parkland Hospital are the only providers in Dallas, Tarrant Collin, or Denton Counties who are close to in line with their area’s diversity.

“The president has been crystal clear that as important as speed and efficiency in vaccinations, equity and fairness are as important,” Jeff Zients, the White House Coronavirus response coordinator said in response to a WFAA question about vaccine equity. “If we were to see that vaccines were going to certain communities, we will take action.”

Factors contributing to the divide

The gap exists because of simple but often overlooked reasons.

According to the Federal Reserve Bank of Dallas, Dallas is last in the percent of people connected to the internet among the country’s 10 largest cities. More than a third of people are without internet access in Arlington and Fort Worth.

“There is a digital divide,” Huang said. “There were certainly people who were more tech-savvy, more internet savvy.”

FEMA set up sites targeting disadvantaged communities including the one at Fair Park and at the Arlington stadiums.

“There's a problem with that in that Globe Life Field is not on anybody's bus line,” Brooks said.

Federal officials are also asking businesses to give employees time off or paid compensation to allow them the ability to get an appointment.

There’s also the issue of trust.

“There is certainly hesitancy and we’ve certainly heard about it in communities of color,” Huang said. “A lot of these trust issues are out there that we need to address to address some of the differential that is apparent in vaccine hesitancy.”

RELATED: Fair Park vaccine hub closed this weekend as vaccines run out; US Secretary of the Army visits the site

Many counties are providing free rides through public transportation. Lyft and Uber are providing discounted or free rides for people going to vaccine sites, and registration events have popped up across North Texas and some providers are taking vaccines directly to people.

“I think we got to think out of the box and do things that we've never done before because we're dealing with something we've never dealt with before,” Butler said.

Eventually, all who want a vaccine will get one, and eventually, the numbers should level off.

Eventually, it will be easy to forget the problems COVID-19 has exposed and magnified.