Dr. Fauci explains why getting your second Pfizer, Moderna shot is important for COVID-19 variants 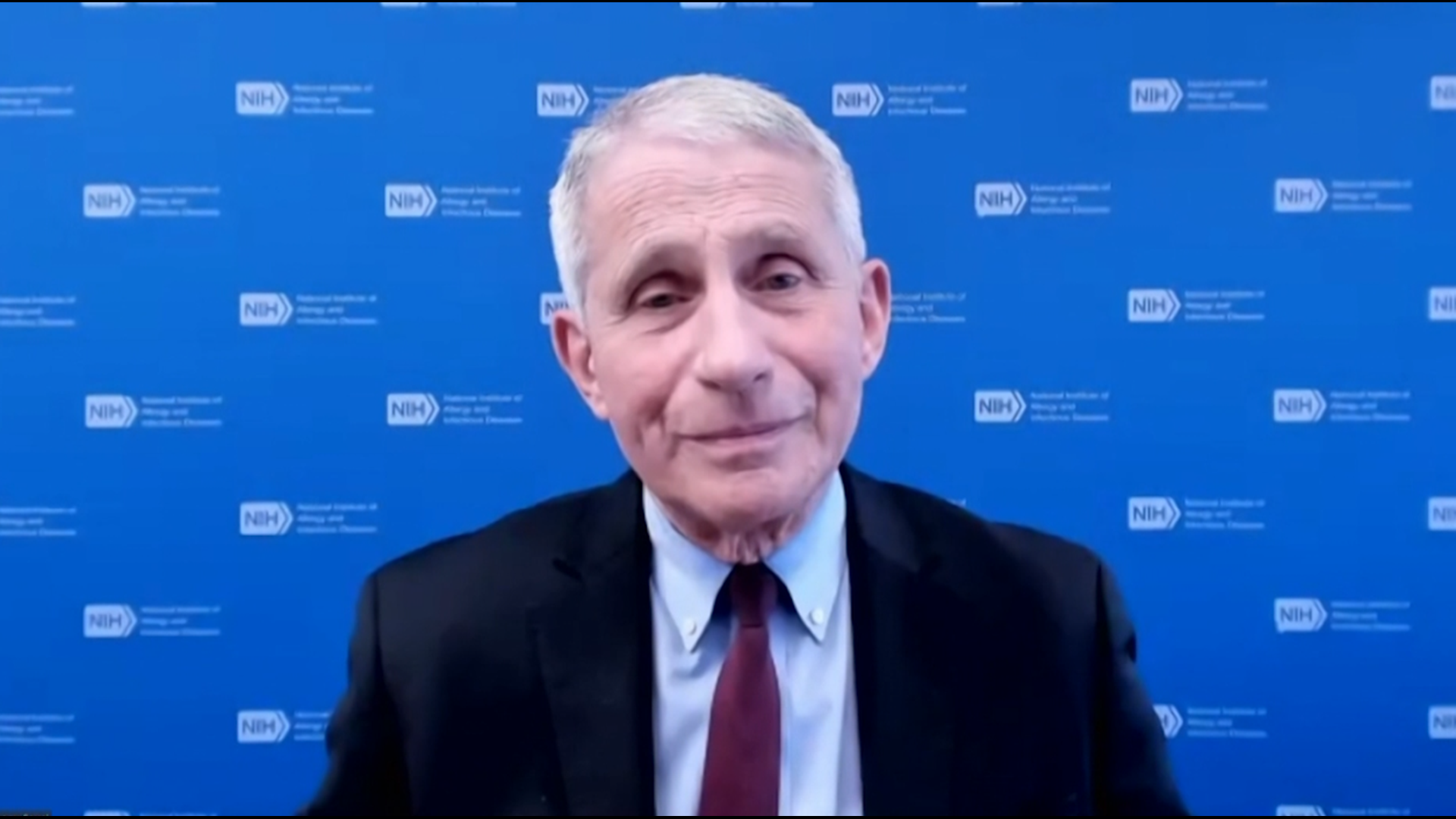 While he often talks about COVID-19 across the country, WFAA had the rare chance to speak to him one-on-one and get answers to questions related to Texas and the latest nationwide developments in the pandemic.

Dr. Fauci on how he views life the past year:

"Well, it certainly has been an unusual year, to say the least. This is a very important week now because it was during this week that the WHO declared this a public health emergency of global health concern. In fact, it was the day, tomorrow, a year ago tomorrow, was when I was in the Oval Office, with President Trump and others of my colleagues on the White House coronavirus Task Force, and we made the recommendation to shut down travel of non-citizens from Europe to the United States because it was very clear that the infections that were seeding New York City and the northeastern corridor were not coming directly from China. They were actually coming from the European Union. And the President, to his credit, agreed that that's something that we should do. And that really started the shutdown, even in our own country, and it began the long journey that we've been on right now, of, you know, getting a lot of infections and then coming down and then surging up. We've had three major surges since then. The week of March 2020 was really at the time of the first major surge. At the end of the winter the beginning of the spring."

Dr. Fauci on Gov. Abbott’s decision to open to 100% capacity and get rid of the mask mandate:

"I'm a bit concerned about it. I understand the need and the desire to get back to normal as quickly as you possibly can. We will ultimately get there. My concern, and that of my public health colleagues, is that it isn't like turning a switch on and off. If you just completely put aside all public health measures, there is a risk that you will then trigger another surge and that's not what we need right now. We're having the numbers come down sharply, and then they came to a little plateau, and now they're continuing to go down. The one thing you don't want to do is reverse that and have it go up. So I'm a bit concerned, particularly about the masking. I could understand gradually tiptoeing into some of the other activities that you want to do which are important, and should be done, but I think we should continue with the masking for at least another period of time."

Did any Texas official reach out to Dr. Fauci before the reopening decision?

"No, they did not, I had not heard from some Texas officials about this before it happened."

RELATED: 'People aren't ready to give up the masks yet': Some North Texans still taking COVID precautions as state mandates are lifted

Dr. Fauci on when reopening should begin:

"What you actually want is you want to see a very low test positivity. You know, less than 5% if you can get there. Whether or not, every area in Texas will be there, or just certain sections of Texas, but you really want to get down that low. Probably as important or more important than that is the percentage of people who are vaccinated. Right now, you know, 9% to 10% of the entire country is fully vaccinated, and a certain percentage more have received at least one dose. As the weeks and months go by as we get more and more vaccine doses and as we continue to go over 2 million vaccinations per day, literally within days to weeks as they go and you progress, we get better and better and better to the point where we hope by the time we get a substantial proportion of the population vaccinated, it will be much less risky to pull back on public health measures."

Dr. Fauci on how he’d grade Texas’ handling of the pandemic:

"Well you know, I don't want to get into giving them a grade because that I think that would be a bit unfair because I am not there every day on the ground seeing what's going on. You know, I did say that I was a little bit concerned about opening up too quickly. When the second surge we had, if you recall, which was in the summer of 2020, when the southern states, including Texas, when we were trying to open up the economy, opening up the country by doing the gateway, the phase one, the phase two, and phase three. You know, there were some states including Texas that went a bit quickly on that, you know, when we had a surge, that was really quite an important surge, in the summer. But again, it is Texas. It is a really big state, you have a lot of people. So. you don't want to just be judging, everybody the same way I mean there's some areas that did really quite well."

Hear more of Fauci's conversation, and William Joy's big takeaways on a bonus episode of Y'all-itics. Subscribe wherever you get your podcasts: Apple Podcasts | Google Play | Spotify | Stitcher

Dr. Fauci on his biggest regret of the pandemic:

"You get asked that question all the time, but since this was such a moving target, we did not know everything we needed to know in the very beginning. We kept getting an unrolling and an evolution of knowledge that influenced greatly what statements we made and what recommendations we made. Retrospectively, when you look back, based on the information we had at the time, 'That was the right decision,' 'That was the right statement,' and then based on what we know now, it wasn't.  For example, we did not know very early on the efficiency with which this virus spreads from person to person. We were under the impression from the Chinese, and then it became amply clear to us that this is highly efficient in going from person to person. We thought it was jumping from an animal to a human but didn't spread very well. Then we found out it spread very well. Then the real transforming bit of information that we found out was that it also is spread very, very much so from a person who has no symptoms at all. So, we found out that anywhere from a third to 40% of people who are infected have no symptoms. In between 50% to 60% of all the infections get transmitted from someone who has no symptoms to another person which makes it a major impact on things like mask-wearing on contact tracing. If we had known all of that last January, we'd have done things a bit differently."

"The UK variant, the 117, spreads more rapidly and does have a higher degree of virulence. That's the sobering news. The good news is that the vaccines that we have right now that we're administering do very well against the UK variant. The one that is of more concern is the South African variant, the 351, that is one that actually not only spreads rapidly, but it eludes some of the protection of monoclonal antibodies and of the vaccine. Doesn't completely eliminate it for the vaccine. You still get a degree of protection, but it diminishes it somewhat, but we have our own homegrown variants that we need to be concerned about. For example, the 526 variant in New York, and the 427429 variant in California. So we've got to keep our eye out on these and take them all seriously."

Dr. Fauci on people not getting second shots of vaccine:

"If you have a diminution of the level of antibodies, and you get infected, it could really enhance the evolution of variants, and that's the reason why we keep saying that it is optimal for those who get the Pfizer, to get it 21 days later and those who get the Moderna to get it 28 days later. I mean, obviously, if they are stressed you can keep it, you know, maybe a week or two more than CDC has said. If you have no other choice, if there's really a difficulty in getting it, a week or two later is not going to make a big difference, but you don't want to go much further than that."

RELATED: Key moments that defined the first year of the COVID-19 pandemic

Dr. Fauci on when vaccine supply will speed up:

"I don't think that we're going see anything more than what was announced about the end of May. The end of May, to have enough vaccine to vaccinate virtually everybody in the country who's an adult, is really quite good and quite fast. One of the issues of being able to get other companies involved in making the mRNA vaccine that Moderna and Pfizer make is that that's a pretty complicated process to do, much more complicated than just going in and making a different type of a product. So, I don't think we're going to see much of that. What we did get, which was good, is that we negotiated with both Pfizer and Moderna to get an additional 100 million doses apiece from them a couple of weeks ago, a few weeks ago, which increase the totality, from them of a total of 600 million doses, which is enough to vaccinate 300 million people with two doses."

RELATED: Phase 1C will start March 15, allowing Texans 50 and above to get vaccinated

"That's a decision the CDC makes, and they actually look at the data on a daily basis in real-time, continually re-evaluating the guidelines. I can tell you the guidelines that came out a couple of days ago that spoke about people who were fully vaccinated in the home either with relatives or neighbors, and a modest number of people in the home setting, that is just the first installment in a series of recommendations that will come out, including what to do about travel. And the travel one I'm sure it's going to be very soon. You'll be hearing more about what one can do when you're vaccinated and traveling."

"I mean, I think people need to hang in there a bit longer because literally every day that you get 2 to 3 million people vaccinated, we get closer and closer to being able to have some form of normality. There is light at the end of the tunnel, and we will get through this together. I think people need to appreciate that and not be discouraged."