Court documents explain the role the FBI believes these suspects played in the Jan. 6 insurrection. 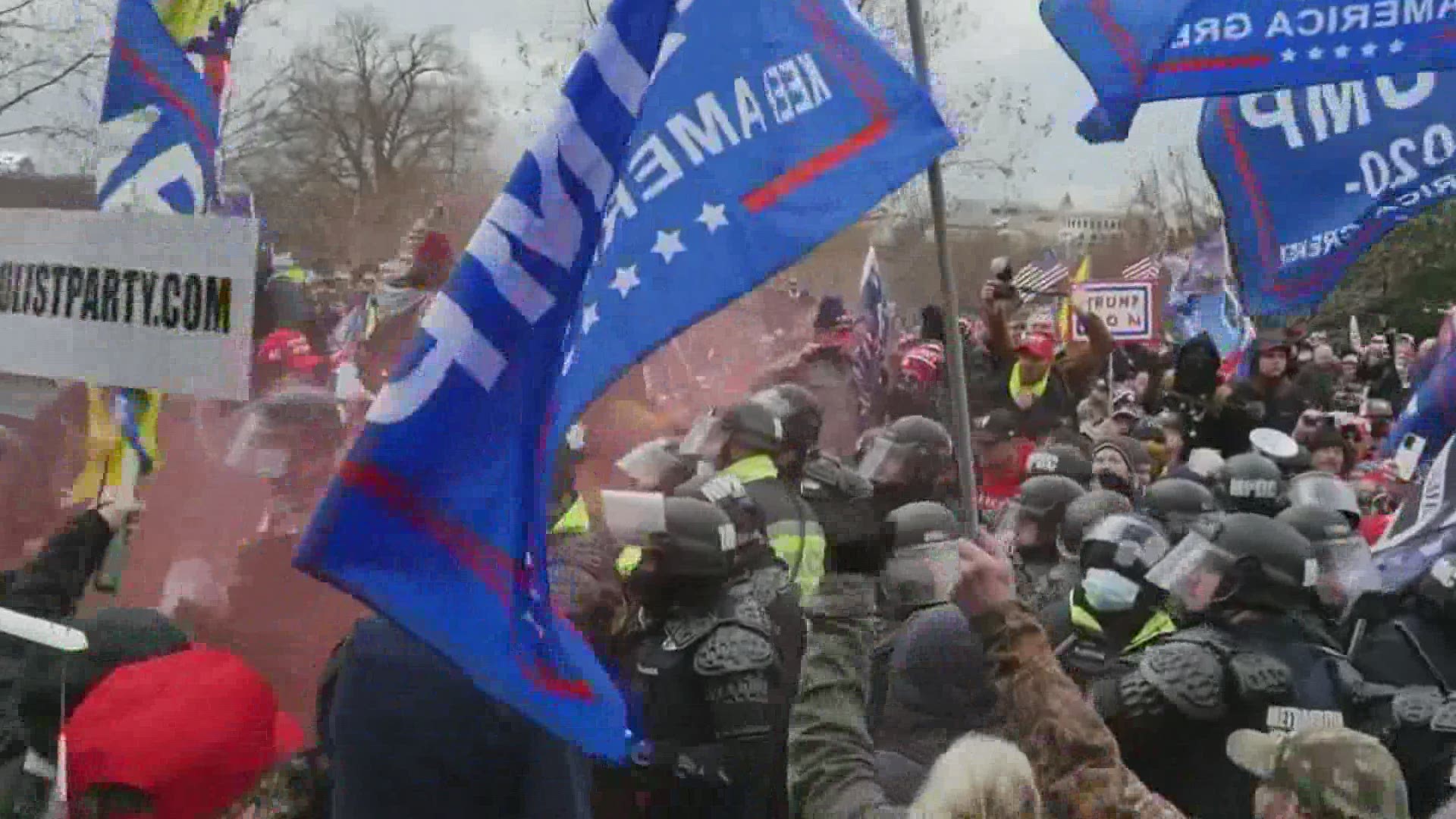 DALLAS — Updated Jan. 27 to include an additional arrest.

Thousands of Americans descended on the grounds of the U.S. Capitol on Jan. 6, and the FBI now says that at least eight North Texans were among them.

They receive help from law enforcement partners but also rely on the public as well. Anyone with information that can help the FBI identify those who were at the U.S. Capitol can call the Dallas FBI Field Office at 972-559-5000 or go to https://tips.fbi.gov/.

Here are the eight people who have been publicly identified and charged in the insurrection:

Daniel Phipps has been charged with knowingly entering or remaining in any restricted building without lawful authority and impeding official functions, and violent entry and disorderly conduct on Capitol grounds.

Phipps allegedly posted multiple pictures on social media inside and outside the Capitol, according to a criminal complaint filed in the U.S. District Court on Jan. 19.

"I went to D.C. I helped take the Hill," he allegedly wrote in a post.

An FBI task force member confirmed his identity through his driver's license photo and talking with neighbors.

Nicholas DeCarlo of Burleson was arrested Jan. 26 after the FBI says he took part in the U.S. Capitol riots on Jan. 6. He claimed he was a citizen journalist, and posted to social media before and after the insurrection, according to a criminal complaint. He was released and is awaiting trial.

Nicholas DeCarlo, 30, faces three charges in federal court, according to a criminal complaint filed on Jan. 19: entering or remaining in any restricted building or grounds, intent to impede or disrupt the orderly conduct of Government business or official functions, and parading or demonstrating on Capitol grounds.

The FBI criminal complaint, filed in the U.S. District Court for the District of Columbia, says DeCarlo told the Los Angeles Times that he was a reporter. The FBI said he was not credentialed as a reporter at the Capitol while the LA Times said he had a YouTube channel with less than 600 followers.

The criminal complaint says DeCarlo posted photos throughout the day with Nicholas Ochs, who faces a count of unlawful entry into restricted buildings or grounds. The FBI said Ochs is the leader and founder of the Hawaii chapter of the "Proud Boys."

RELATED: FBI arrests Burleson man who claimed to be a citizen journalist at Capitol riots

The FBI said it received at least three tips from people who saw 22-year-old Nolan Cooke of Savoy, Texas post videos on social media of him at the riot.

Cooke has been charged with three counts in federal court: acts during civil disorder; entering and remaining on restricted buildings or grounds and disorderly disruptive conduct in or near a restricted building on grounds; and unlawful activities on Capitol grounds

According to the affidavit, on Jan. 5. Cooke drove to Washington, D.C. with his girlfriend and a relative after seeing a tweet from former President Donald Trump about a rally.

Upon arriving in D.C., a relative dropped Cooke and his girlfriend off at the Capitol Building.

During an interview with federal authorities on Jan. 21, Cooke allegedly said he went to the Capitol because he wanted to be heard.

He then admitted to being at the front of the crowd pushing against the officers who were enforcing the restricted access to the building, officials said.

The Texan also said he pushed past police officers to get to one of the doors of the Capitol and used a flag pole to bang on a window, officials said.

The affidavit states that authorities searched Cooke's residence on Jan. 22. According to jail records, he was taken into custody and booked at the Fannin County Jail.

Dallas County man has been arrested and faces federal charges for his participation in a mob that stormed the U.S. Capitol on Jan. 6. He is set to remain in custody until his trial.

Federal officials say Garret Miller was arrested on Jan. 20 and has been charged on five counts:

The FBI said in a criminal complaint that another law enforcement agency alerted them to a Twitter account @garretamiller that posted video from inside the U.S. Capitol.

The video was posted with the caption "From inside congress" around 6:56 p.m. on Jan. 6 and showed 14 seconds of the crowd inside the Capitol Rotunda, the complaint said.

On Jan. 3, he posted that he was bringing a grappling hook, rope, a level 3 vest, helmets, a mouth guard and a bump cap, according to the document.

Miller in his posts also directed violence and threats towards the officer who fatally shot a woman inside the Capitol, including saying that the officer was "not going to survive long" and calling the officer a "traitor," according to the complaint.

Agents also found multiple posts from an account believed to be Miller's on Instagram as well, the document said.

Guy Reffitt, a 48-year-old father of two from Wylie, is charged with obstruction of justice and knowingly entering a restricted building or grounds. The second charge is akin to trespassing. He was being held in the Fannin County jail.

In an affidavit filed on January 16, FBI agents said Reffitt was seen in news footage on the steps of the Capitol taking part in the January 6 riot.

The affidavit also says cell phone data places Reffitt’s cell phone in the area of the Capitol that day.

According to the affidavit, Reffitt’s family members told FBI agents who executed a search warrant on their home that Reffitt had gone to Washington to “storm the capitol” and had taken weapons with him on the trip.

RELATED: New video reveals more about Texas connections to attack on US Capitol

The affidavit also says when Reffitt returned to Wylie, he warned his children not to turn him in, telling him they would be acting like traitors and “traitors get shot.”

The agents said the children didn’t feel threated but did feel “disturbed.”

The affidavit also says Reffitt’s wife told agents her husband is a member of the Three Percenters, which is an anti-government organization.

RELATED: Wylie man, believed to be member of 'militia extremist group,' arrested in connection to US Capitol attack

Troy Anthony Smocks, 58, is accused of making threats associated with the insurrection on social media.

In an affidavit filed January 14, FBI agents revealed Smocks flew to Washington on January 5 and returned to Texas on January 7. Smocks lives in Dallas.

According to the affidavit, Smocks posted on the Parler social media app that he and others would return to the Capitol on Jan. 19, the day before the presidential inauguration, with weapons.

In another Parler post, FBI agents said Smocks said it was time to prepare weapons and “hunt these cowards down like the traitors that each of them are.”

The two posts from Smocks’ account were seen more than 100,000 times, according to the affidavit.

One video posted by that account featured a man in a Veterans for Trump hat saying, “Why don’t all of us veterans get together and have our own protest?”

Smocks is not a member of the military, according to the court documents.

Jennifer “Jenna” Ryan, 50, is a realtor who lives in Carrollton.

On Jan. 26, was given two more charges. The new charges include parading or picketing in a Capitol building and disrupting the orderly conduct of government business and official functions.

On Jan. 15, she was charged with knowingly entering or remaining in any restricted building or ground without lawful authority, and disorderly conduct on Capitol grounds.

According to an affidavit, FBI agents believe Ryan was among a group of several people from North Texas who took a private plane to Washington on January 5.

The affidavit, filed January 15, alleges Ryan made multiple social media posts saying she was going to “storm the capitol” in Washington.

FBI agents say in one now-deleted post on Facebook, Ryan was using live video to narrate as she walked toward the Capitol building during the January 6 insurrection.

According to the affidavit Ryan said, “We are going to [expletive] go in here. Life or death. It doesn’t matter. Here we go,” as she approached the stairs outside the Capitol.

Agents said she could also be heard saying, “This is our house!”

Larry Brock, 53, of Grapevine, turned himself in to the FBI on Jan. 10. He has been released and is awaiting trial in federal court.

A federal judge released him from custody on the condition he give up his weapons and wear an ankle monitor.

Brock, a former lieutenant colonel in the Air Force, entered the Capitol building wearing a green helmet, green tactical vest with patches, and a black and camo jacket, according to FBI agents.

They believe he was holding white flex cuffs, which are used by law enforcement to restrain and/or detain people.

Video from a New Yorker reporter who embedded himself with pro-Trump rioters appears to show Brock giving instructions to people on the floor of the U.S. Senate during the riot.

“I love you guys. We’re brothers but we can’t be disrespectful,” Brock says in the video as people took photos on the dais.

“It’s a PR war. You have to understand it’s an IO war. We can’t lose the IO war. It’s information, information operation.”

RELATED: Grapevine man to be released while he awaits trial for charges related to US Capitol riot, judge rules