Video taken by a New Yorker reporter shows a man the FBI has identified as Larry Brock of Grapevine speaking and other people referencing Sen. Ted Cruz. 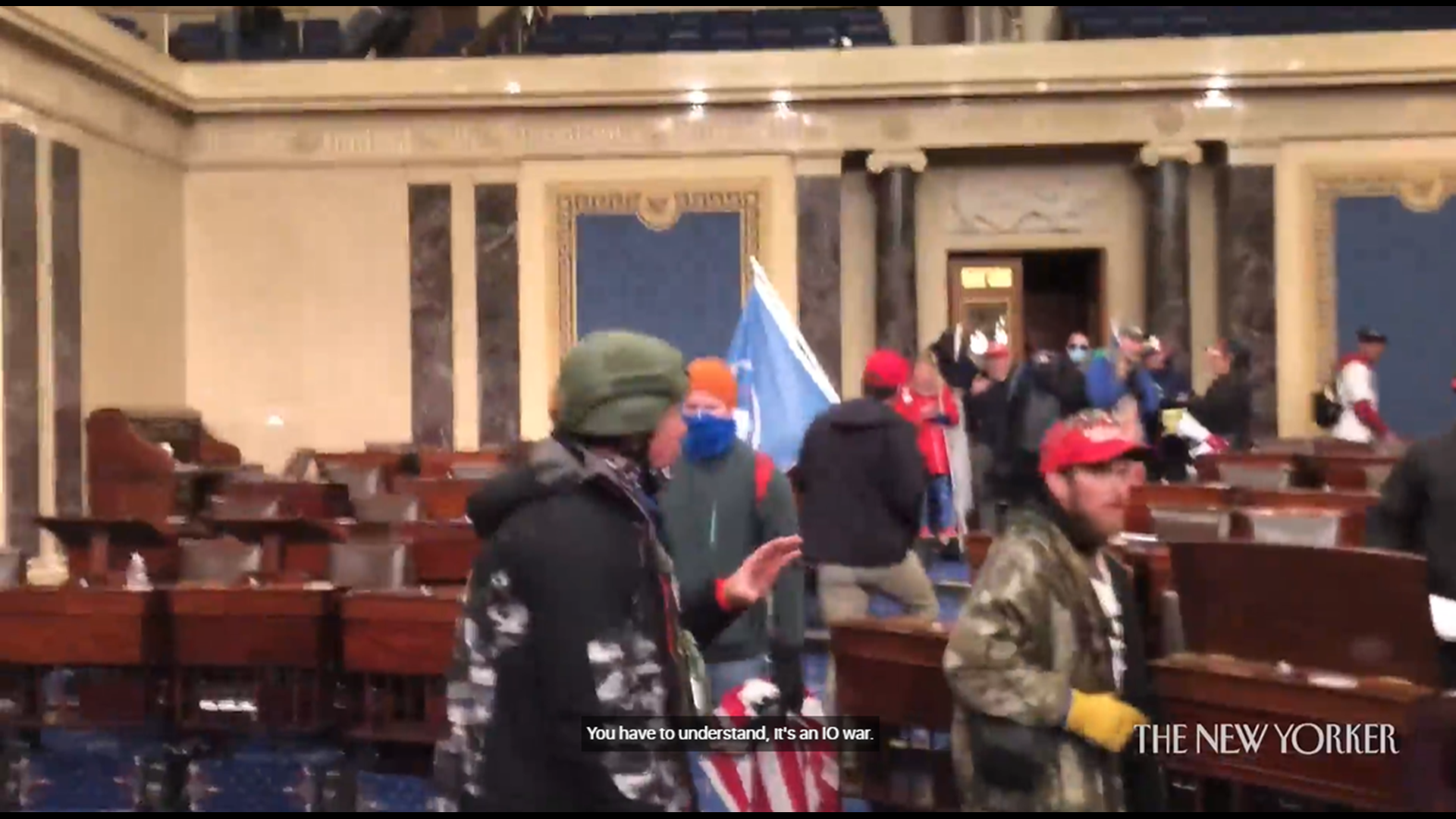 FORT WORTH, Texas — New video from a New Yorker reporter who embedded himself with pro-Trump rioters reveals more details about what happened inside the US Capitol on Jan. 6.

A man the FBI has identified as Grapevine resident Larry Brock is seen in the video giving instructions to people inside the US Senate.

“I love you guys. We’re brothers but we can’t be disrespectful,” Brock says in the video as people took photos on the dais. “It’s a PR war. You have to understand it’s an IO war. We can’t lose the IO war. It’s information, information operation.”

RELATED: Grapevine man to be released while he awaits trial for charges related to US Capitol riot, judge rules

Brock is then seen taking photos of papers on Senate desks along with other people taking part in the attack.

“I think [Sen. Ted] Cruz would want us to do this,” one man taking photos says.

“Yeah absolutely,” another one responds.

“I think we’re good,” the first man says back.

A spokesperson for Sen. Ted Cruz said in a statement: “As Sen. Cruz has said repeatedly, the terrorist attack on the Capitol was reprehensible, and the criminals who carried out the attack should be fully prosecuted. He has been clear, consistent, and unequivocal: violence is always wrong—whether from Left or Right—and violent criminals should go to jail for a very long time.”

Throughout the 12-minute video, the mob attacking the US Capitol is seen fighting with officers and can be seen at the end of the video chanting “F--- the blue.”

More than 50 officers were injured, 15 were hospitalized and one officer was killed during the attack.

During one confrontation with officers inside the US Capitol, a person in the mob in the video says, “You’re outnumbered. There’s a f---ing million of us out there. We’re listening to Trump, your boss.”

Dr. Alex del Carmen, the associate dean of criminology at Tarleton State University, has trained thousands of officers and police chiefs across the state of Texas.

“This is incredibly unacceptable. This should have never happened,” del Carmen said. “The capitol police officers were clearly outnumbered. They clearly did not have rules of engagement.”

Del Carmen said the mob taking photos of documents once they’re inside is something military members are trained to do during operations.

“The individuals that have a mission — in some cases military background, law enforcement background — they’re the ones that are sort of driving this,” he said. “It’s hard to say if the people who were actually doing this were doing it for the sake of preserving evidence or because they had some kind of military background.”

He also said the people storming the Capitol seem to have goals beyond just committing a crime or protesting.

“I think it was clear that there is a mission, and the mission at least as it was verbalized by some of the people that were there was to take over the government.” he said. “Law enforcement needs to prepare for that eventuality that these individuals are maybe willing to die.”

RELATED: TSA may add US Capitol rioters to no-fly list

More than 100 people have been arrested for taking part in the US Capitol riots so far, according to the FBI, including at least three individuals living in North Texas.