Does it seem like home prices in Dallas-Fort Worth are rising faster than ever before? That's because they are

Gains year-over-year were the highest the metropolitan area has ever seen. 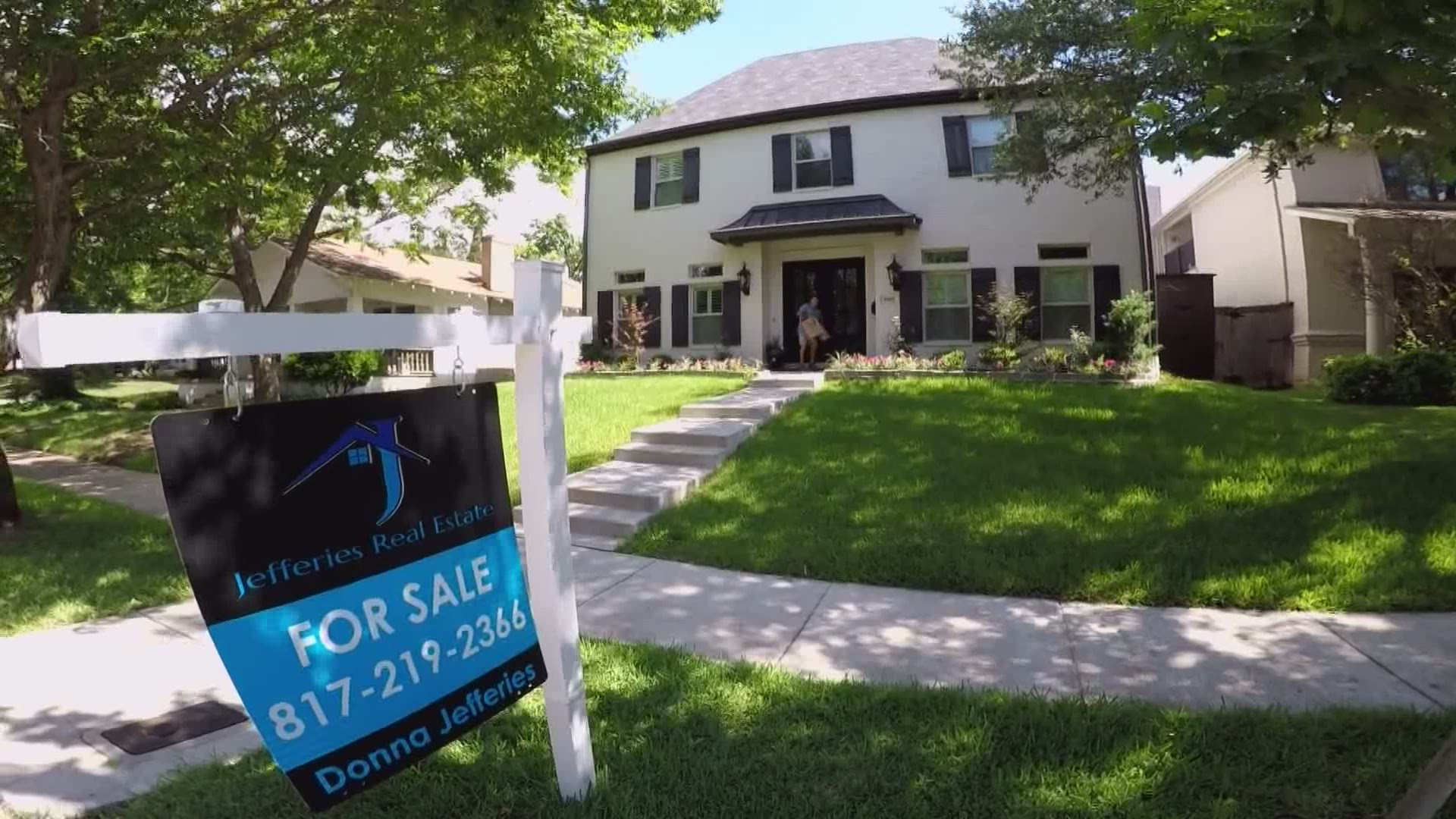 DALLAS — If it feels like all anyone has been talking about in the real estate space over the last few months is how hot the housing market is right now, that's because it is.

Homes across the U.S. were on average 14.6% more expensive in April than they were at that time last year, a new report from the S&P Dow Jones Indices revealed.

And in Dallas, they were higher than ever before, with a 1-year change of 15.9%.

Dallas was one of five cities across the country that recorded its all-time highest gains over a 12-month period, the report stated. The other cities were Charlotte, Cleveland, Denver and Seattle.

Elizabeth McCoy is the president of the Greater Fort Worth Association of Realtors and just this week talked to an agent handling 21 offers on a home.

“It’s a pretty fast pace right now," she said. “You may find a house that you love but you shouldn’t totally fall in love because it may not be the one that you get.”

McCoy says many are now looking for homes outside of Dallas, Tarrant, Collin and Denton counties to find something affordable, and says some are waiving appraisals, inspections and option periods.

“This is really frightening for real estate agents," McCoy said. “That’s a really important time for a buyer to be able to get in and make sure that the house is in a condition that they are expecting.”

Becky Frey has been a real estate agent for more than 30 years and is seeing jumps across all price ranges and locations.

“The key, I think, is to price a house pretty much in market. I think right now we have some sellers who think well I can just put any price on my house because people will pay anything," Frey said.

A major selling point is that rates are low, but they have been dropping for more than 30 years.

Frey is telling buyers to offer basically whatever they can stomach.

RELATED: Dallas-Fort Worth new home prices soar to another record

And it's not just gains over last year's prices, either.

All 20 cities had higher price increases in the year ending April 2021 versus the year ending March 2021, representing growth over the previous month, according to the report.

It's not all easy for sellers, the home rental market is also seeing price spikes.

“If you’re going to go rent for a year and just see what happens, we’ve got to find the rental first because that market is as tight as the sell market," Frey said.

In Dallas, the percent change month-over-month from March to April was 2.9% higher, while February to March had already seen a percent increase of 2.8%.

"We have previously suggested that the strength in the U.S. housing market is being driven in part by reaction to the COVID pandemic, as potential buyers move from urban apartments to suburban homes. April’s data continue to be consistent with this hypothesis," Lazzara added.

But that's not necessarily the only thing driving the rise, he said in the report.

"This demand surge may simply represent an acceleration of purchases that would have occurred anyway over the next several years," Lazzara said. "Alternatively, there may have been a secular change in locational preferences, leading to a permanent shift in the demand curve for housing. More time and data will be required to analyze this question."

Every region in the U.S. saw double-digit gains, though the West and Southwest saw the highest rises, at 17.2% and 16.9% year-over-year, respectively.

Some may harken the high real estate valuations back to the period before the 2008 crash. Home prices on average in April 2021 were actually greatly exceeding what they were in winter 2007, the report stated.

To read the full release about the report, click here.