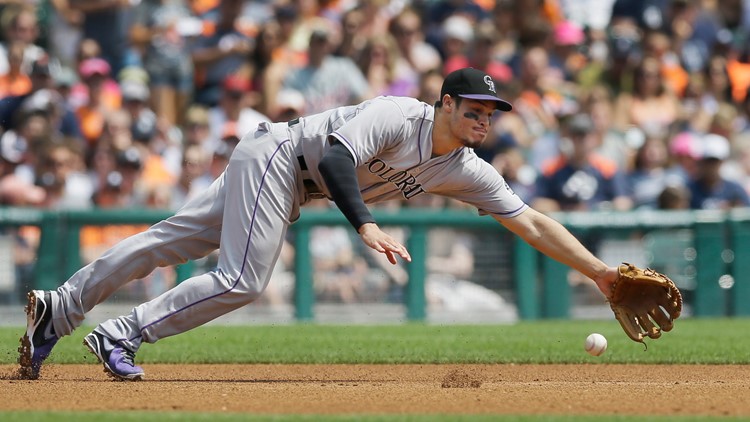 The saga of who will play third base for the Texas Rangers currently appears to have come to an end with Todd Frazier landing the job after Anthony Rendon and Josh Donaldson signed elsewhere over the winter. But is that set in stone? Perhaps the saga continues.

Frazier signed a one-year deal worth $5 million to lock down the hot corner in 2020 but he isn’t the only option for general manager Jon Daniels. The rumors continue to persist that the Rangers still have tires to kick and moves to make ahead of spring training.

Colorado Rockies’ third baseman Nolan Arenado is currently unhappy with his team and that isn’t breaking news. The Rocky Mountain drama has gotten to a point where Arenado has vowed to no longer speak about his relationship with the team that has a cracked foundation after he signed a massive contract extension last winter.

The Rangers have been rumored to have coveted Arenado for years now and should be a team that is pursuing him if his relationship in Colorado is irredeemable. Arenado is among the best in the field at third base and an absolute offensive force that the Rangers could use as Joey Gallo’s running mate as they open their new ballpark in March.

Over the last five seasons, Arenado hasn’t hit fewer than 37 home runs or drove in fewer than 110 runs during that span. He has had an impact as a player that is very similar to what the Rangers received from 2011-2013 from future Hall of Famer Adrian Beltre. Much like Beltre, Arenado brings great defense as he has been named the Gold Glove winner at the hot corner in the National League for seven-straight seasons dating back to 2013. Indeed, for years now, the Rangers have considered Arenado to be the true heir to Beltre.

Given that Arenado is the whole package, the only reason the team would be reluctant to trade for him is his contract offers an opt-out after the 2021 season and he has a full no-trade clause which means he’d be able to pick where he lands. In addition, the Rockies aren’t going to just hand Arenado over and the Rangers will need to decide on an appropriate offer for a player – though as great as he is – that is already getting paid full value.

The odds seem low that the Rangers will be able to navigate the difficult trade negotiations to bring a new Nolan to Texas, but there is still an option out there that will only cost the Rangers money and they should have the budget to keep adding to their lineup. Should the Arenado trade go belly up, then the Rangers should focus their efforts on landing Nicholas Castellanos.

While Castellanos doesn’t provide the same MVP-caliber numbers that Arenado would, with the uncertainty at first base he would provide an alternative path while filling a right-handed hitting hole in the lineup. The Rangers need to be proactive in their approach to getting back to competitive baseball instead of reactive.

With Castellanos still available as a free agent, the Rangers would be able to add a hitter that has averaged 22 home runs with 87 runs batted in during his career while batting .277. In the second half of the season, including after he was traded from the dreadful Detroit Tigers to the contending Chicago Cubs, Castellanos contributed an Arenado-ian slash line of .298/.332/.592.

While Castellanos isn’t a great defender and has never manned first base, what he would provide is the ability to get on base. Castellanos’ OBP of .337 would have been higher than all but Gallo, Shin-Soo Choo, and Hunter Pence among regulars for the Rangers last season. However, as usual, Daniels remains coy as to whether or not Texas will actually land the free agent.

With the knot that would need to be untangled to acquire Arenado looking downright Gordian, it’s possible that Castellanos, should he be signed by Texas, would give the Rangers some protection at first base and be an easier solution to the issues facing their sparse lineup.

Do you think the Rangers should try to pry Nolan Arenado from the Rockies or would signing Nicholas Castellanos be a better use of their time? Share your thoughts with Patrick on Twitter @PatSportsGuy.