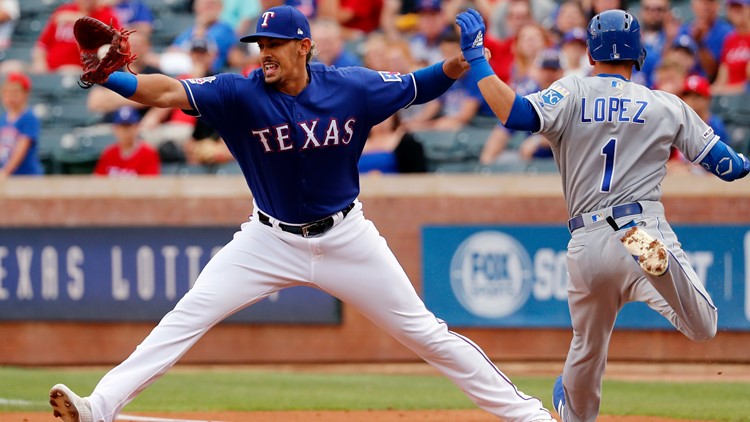 Photo by: AP
Texas Rangers first baseman Ronald Guzman (11) reaches for the throw on a groundout by Kansas City Royals' Nicky Lopez (1) during the first inning of a baseball game in Arlington, Texas, Thursday, May 30, 2019. (AP Photo/Tony Gutierrez)

Believe it or not, pitchers and catchers are set to report to Surprise, Arizona for spring training in a couple of weeks. With that in mind, the Texas Rangers are looking to make a run at dethroning both the Oakland Athletics and Houston Astros from atop the American League West standings in 2020. For the Rangers, however, there are still a few questions as the season inches closer, and one said spot is at first base.

The Rangers could go into the 2020 season with a similar plan to the one they had last year. A year ago, Ronald Guzman won the job coming out of Spring Training, after a decent rookie campaign in 2018, where he would start 87 games for Texas in 2019. However, the bat never really came to life for Guzman and he was sent down to Triple-A Nashville in July before returning in September.

Overall, Guzman hit .219 with 10 home runs and 36 runs batted in while contributing a slash line of .219/.308/.414. And, while he is generally considered to be a plus defender at the position, the Rangers definitely need more production from first base than what Guzman gave them a season ago.

Should the team stick with Guzman as the primary first baseman in 2020, it likely means that they will explore platoon options with Danny Santana or Nick Solak in some configuration. Santana could be in the mix to be the everyday centerfielder, however, if that position isn’t upgraded. If center field is freed up, Santana is in the mix to platoon at a variety of positions such as third base along with Todd Frazier. Frazier is projected to start at third base at this point but that plan could change with the team’s current pursuit of Nolan Arenado.

That is where the water gets a bit murky for Texas. The Rangers signed Frazier to a one-year deal to handle the hot corner but Arenado is the prized pony as far as this team is concerned. His relationship with the Colorado Rockies could open the door enough for general manager Jon Daniels to kick it in and land the budding star. Bringing a new Nolan to Texas likely paves the way to move Frazier to first to split time with Guzman.

Throughout his young career, Guzman is batting for an average of just .229 in 723 plate appearances and his 26 career home runs, with a career .415 slugging percentage, aren’t good enough for the position. For the Rangers, Guzman needs to be closer to an improved version of his 2018 self than what was on display last season before being sent down to the minors.

What could be the dark horse of the entire situation lies with the pursuit of Nicholas Castellanos. The former Chicago Cub and Detroit Tiger should get strong consideration. While Castellanos was a third baseman by trade in his younger years, before venturing out to the outfield over the last few seasons, second-year manager Chris Woodward could consider him at first, should the Rangers be able to sign him, which would allow him to leave Frazier to man third.

Castellanos is a seven-year veteran who would provide a right-handed hitting threat to balance out the lineup and also could provide additional leadership with a relatively young team that is trying to put the finishing touches on a rebuild effort and return to postseason festivities.

The situation at first base remains wide open with Arenado and Castellanos still out there but acquiring one of those players to provide a better option than just Guzman should be Daniels’ top priority before Spring Training arrives. Going into the season banking on Guzman alone seems counter productive, especially considering the team acquired Corey Kluber to bolster their rotation in 2020 with the two-time Cy Young Award winner as a signal that they’re trying to compete.

Do you think the Rangers need to address first base before the season begins? Share your thoughts with Patrick on the infield conundrum on Twitter @PatSportsGuy.

Six months to the Olympics, the medal count predictions are in

Antonio Brown turns himself in to police

Serena Williams shocker: Knocked out in 3rd round at Australian Open