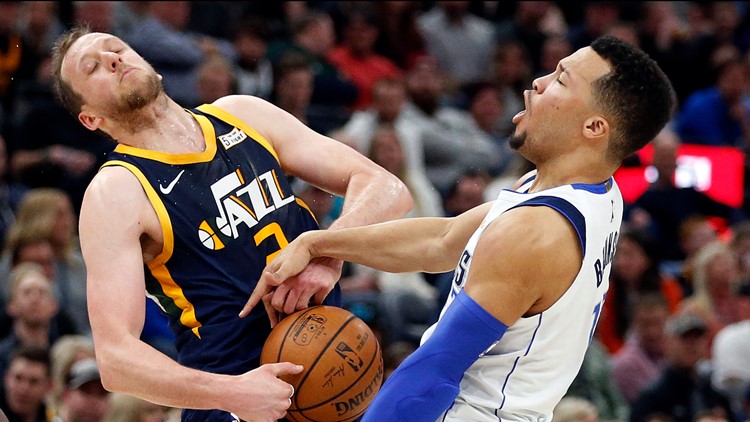 DALLAS — The Dallas Mavericks continue their foray into the Northwest Division as they head to Salt Lake City for a matinee match-up with the Utah Jazz. The battle of division leaders begins at 4:00 p.m. Saturday, a perfect viewing option for after your post-brunch nap.

The Jazz sit atop the division at 31-13, and are in second place in the Western Conference by percentage points over the Los Angeles Clippers, with the division rival Denver Nuggets a mere half game behind. The Jazz have been off since their Wednesday beatdown of the Warriors in the Bay 129-96.

Dallas is first in our hearts and first in the Southwest at 28-16 after dismantling Portland 133-125, in a game that wasn’t as close as the final box score implies.

Donovan “Spider” Mitchell continues to be a scoring machine. He is entering the game averaging 24.7 points per game (PPG), good enough for sixth among Western Conference guards.

Unfortunately for the Jazz man, there are too many players ahead of him having better seasons, including Luka Doncic, who was named to his first All-Star game on Thursday prior to the Portland game. Doncic finished the Mavs’ win against the Blazers with a stat line of 27 points and nine assists, and remains one triple-double shy of tying Jason Kidd’s all-time franchise record.

Thursday’s All-Star announcements did not include Mitchell, continuing the wait for the first All-Star berth for the former Louisville Cardinal. The remaining reserves for each team will be announced on January 30, keeping the chance alive for Mitchell and teammate Rudy Gobert, who is also waiting for his first invitation.

Unlike the starting lineups, the NBA coaches have total control of reserve selections, and may reward the Jazz’ strong start with All-Star representation.

Saturday’s match-up should provide plenty of high scoring and an abundance of treys. The Jazz are the top three-point shooting team in the league at 38.9%, led by their sharpshooters Bojan Bogdanovic (41.7%) and Joe Ingles (42.2%).

The Mavericks lead the NBA in three pointers made at 661 and remain atop the leaderboard in offensive rating (points scored per 100 possessions) at 116.4.

The return of Conley

The trip down “big fish” memory lane continues. Mike Conley, who was the Maverick summer crush in 2016, is back in the fold for Utah after missing a month due to a hamstring pull. Conley (13.0 PPG in 25 games) is having his lowest scoring season since 2012, when he set career highs in scoring (21.2 PPG) in his final year in Memphis.

His return comes at a critical time for the Jazz, as they begin a stretch of games against the Western Conference elite. When the Mavs fly out after Saturday’s game, the Jazz will have a day to prepare for James Harden and the Rockets, then face division rival Denver for the first time this season.

In our Portland preview, I wondered how Powell’s starting minutes would be divided for the remainder of the season.

I expected the bulk to go to Maxi Kleber for the interim while the team looked over the center scraps available. Andre Drummond was a hot rumor, as was the ghost of Joakim Noah. In a perfect world, Boban Marjanovic would remain in his current role of social media ambassador / man that dunks without jumping / comical three-point threat.

The Mavs moved quickly, as Friday saw the trade of Isaiah Roby to Oklahoma City in a roster clearing move. Hours later, the call was made. Willie Cauley-Stein is now a Dallas Maverick at the cost of a 2020 second rounder, courtesy of Utah.

Cauley-Stein arrives in Dallas averaging 7.9 points, 6.2 rebounds, and 1.2 blocks per game this season. At his best, a rim-running pairing with Doncic is promising. While Cauley-Stein won Defensive Player of the Year in college with the Kansas Jayhawks, his effort level on the defensive side while in the league has been hotly contested.

Cauley-Stein signed with the Warriors expecting to finally reach the playoffs, a notion that seemed pretty automatic at the beginning of the season.

With the Warriors tanking for a year, hopefully a trade to a team in playoff contention can provide motivation. Carlisle is known to bury players at the end of the bench who are deemed to be lacking in effort, so the hook may be quick.

Cauley-Stein will probably back up Kleber when the Mavs play big, although the possibility of continuing to play Porzingis big minutes at the five remains.

Let it be known Willie’s middle name is Trill. Seriously.

Can the Mavericks keep raining 3-pointers against the Northwest? Share your predictions with Irvin on Twitter @Twittirv.