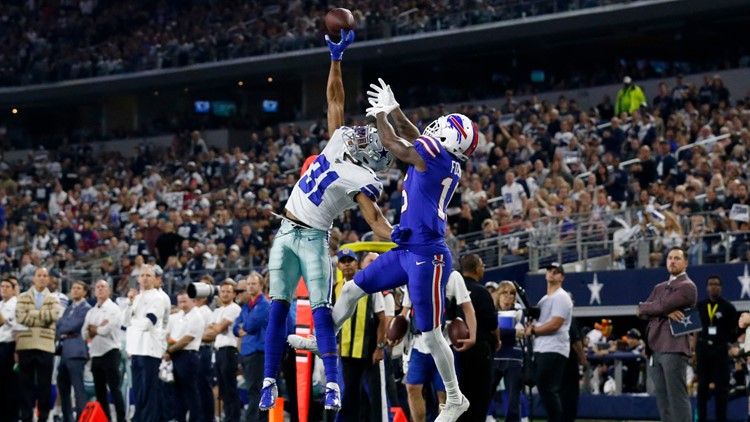 With the growing speculation that the Dallas Cowboys will allow fifth-year cornerback Byron Jones to test the market, one might ponder the inevitable question of whether or not that is a wise decision for Dallas. What is not in question is the fact that the secondary was a bit of a weakness for the team in 2019, so allowing their best cornerback to walk seems counterproductive.

The big reason that many grew sour on Jones was due to his lack of interceptions since being drafted 27th overall in the first round of the 2015 NFL Draft. In the first three years of his career, Jones was used as a nickel corner covering tight ends with the majority of his time spent at free safety where he was allowed to roam the backfield. With the addition of Kris Richard to the staff following the 2017 season, Jones was moved to outside cornerback.

The move proved to be one that saved Byron’s career as he has been a much better cornerback than safety. In 2018, the first year after the move, Jones’ play earned him second-team All-Pro honors and his first trip to the Pro Bowl. Jones quickly became one of the best cover corners in the entire league. So can Dallas afford to lose him?

Outside of Jones, Anthony Brown is also slated to be a free agent. The Cowboys would have Chidobe Awuzie, who has his own cover issues, and Jourdan Lewis as the top two cornerbacks in 2020, prior to any other acquisitions. Given the Cowboys affinity to wait until the initial wave of free agency passes, don’t expect a top level corner to come through this avenue. If Dallas were going to spend big on a corner, you figure they would have already done so on Jones.

So scratch the names like Chris Harris, Jimmy Smith, Logan Ryan, Bradley Roby and Aqib Talib off the want list. A more likely scenario would involve a veteran cornerback like Tramon Williams who would be entering his 14th year in the league. Williams is not a guy who would be expected to make a huge impact but could be counted on to take snaps and provide a veteran presence. Williams is familiar with new Cowboys’ coach Mike McCarthy from their Green Bay days. A combination of a player like Williams plus a draft pick is more likely than the Cowboys being big spenders if letting Jones walk is in the cards.

Jeff Okudah will be the top cornerback in the upcoming draft class but he won’t be in the Cowboys range without a Morris Claiborne-like trade up to land the former Grand Prairie product. The next group of corners that should be considered if the team goes that route would be Kristian Fulton of LSU, Trevon Diggs of Alabama or even C.J. Henderson of Florida.

Even so, any draftee shouldn’t be expected to come in and provide a Jones-like impact in their first year in the league. Jones himself didn’t make this kind of impact until his fourth season. Patience will be the big key with the moves they make during the draft process.

If Dallas does let Byron Jones sign elsewhere, the move would seem to indicate they will allocate those resources to getting extensions finalized with Dak Prescott, Amari Cooper, and other spots while using the draft to fill their secondary needs.  Whether that’s a mistake or not will have to be played out on the field over the next few seasons.

Do you think they Cowboys should work harder to keep Byron Jones or should they allocate those resources elsewhere? Share your thoughts with Patrick on Twitter @PatSportsGuy.

Prescott's price going up as the Cowboys wait