Texas Attorney General Ken Paxton is being investigated by the FBI and faces a whistleblower complaint from a number of former employees. 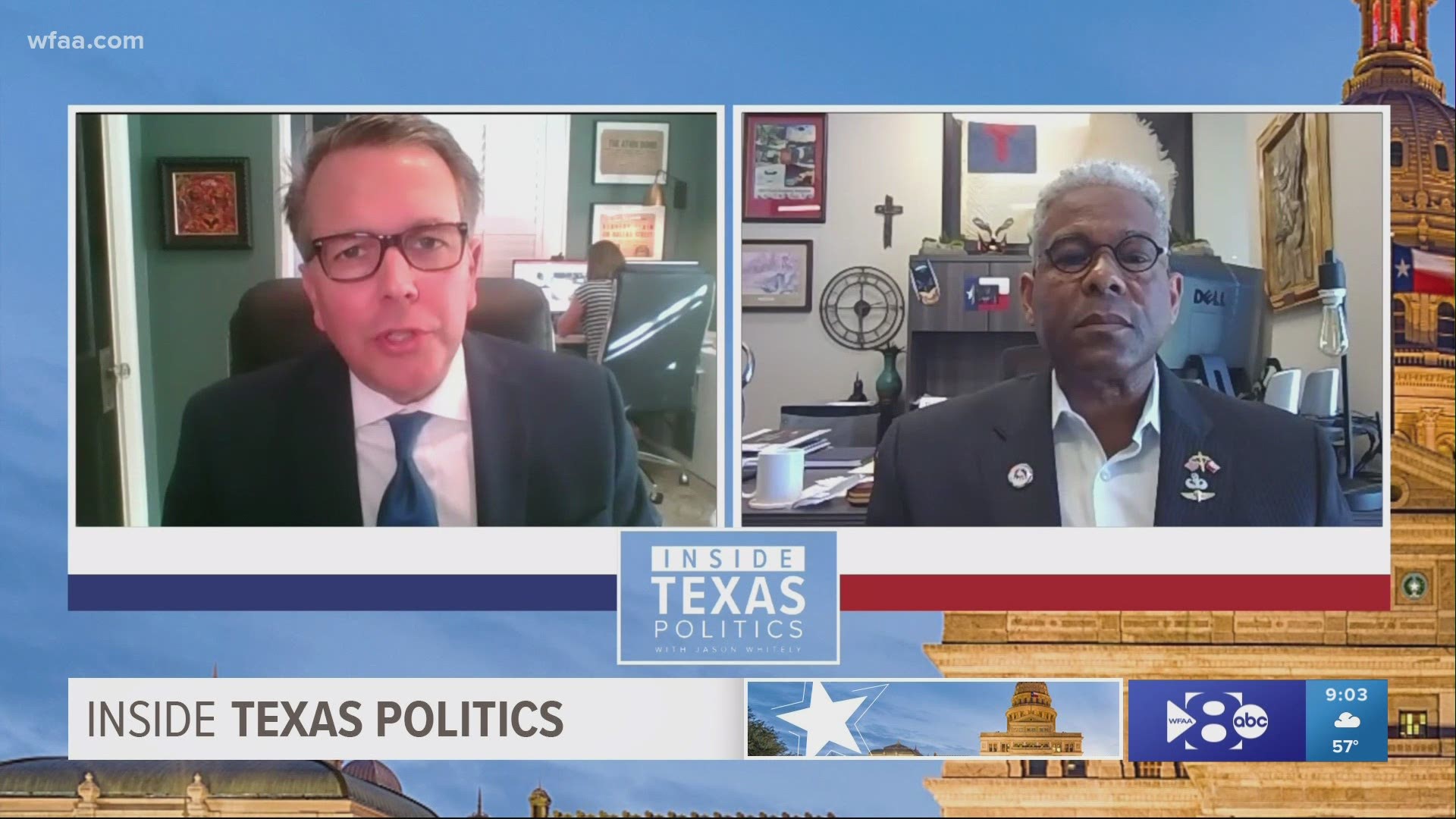 DALLAS — The chairman of the Republican Party of Texas continued to make clear on Inside Texas Politics how he feels about two prominent Texas Republicans.

While he stopped short of saying Attorney General Ken Paxton should resign as the FBI reportedly investigates him, the GOP chairman did say Paxton shouldn’t want to be a drag on the party or the office.

“But it would be really good to have an Attorney General’s office that is not concerned about their own personal legal matters and they can be concerned about the matters of the people of Texas,” Allen West said on Inside Texas Politics.

The FBI is reportedly investigating whether Paxton illegally used the power of his office to help a political donor.

At least eight of Paxton’s former top aides have lodged allegations against the Attorney General.

In another GOP battle, West has come out against Beaumont Republican Dade Phelan’s campaign to become the next Speaker of the Texas House.

Phelan, however, says he has the votes.

But West has called Phelan a “Republican political traitor” after Phelan gained the support of many House Democrats.

West said, in particular, he doesn’t want to see any Democrats gain any committee chair positions.

“We have an 83 – 67 majority in the Texas State House," said West. "And it seems that someone, Mr. Phelan, decided he would go across the aisle and get the support of some 25 or 30 Democrats. Those are the exact same people we worked hard to make sure they did not get a majority in the Texas statehouse, so why would we acquiesce to them?”

Potter County Judge Nancy Tanner says they are in a world of hurt in the Texas Panhandle as they face a rapidly rising number of coronavirus infections.

Tanner expects a long, hard winter for the area, which includes Amarillo. The Republican is facing the same problem as many other parts of the state, something she calls a “Texas thing.”

“Texans have a natural resistance to expert authority,” Tanner said on Inside Texas Politics. “They don’t want anybody telling them what to do. They don’t want it.”

RELATED: Coronavirus cases in Texas are soaring again. But this time Gov. Greg Abbott says no lockdown is coming.

Potter County buildings have been closed for two weeks.

Tanner announced on Inside Texas Politics she will order them closed for two more weeks.

She said the state has offered to help, but there just aren’t any decidedly right answers when fighting the pandemic.

“They’ve given the mayor and myself the authority to shut certain businesses, to shut bars, to shut county buildings, city buildings, and we have done that, and still the numbers are rising," said Tanner.

RELATED: Funeral homes and hospitals in parts of Texas brace for new wave of coronavirus infections and deaths

She said bars continue to be a driving force behind the uptick in cases.

Closing the bars, however, did no good whatsoever, Tanner said.

“TABC allowed them to pay $1,000 to open as a restaurant. They had to get food trucks to come on site,” Tanner said. “So they have a food truck on the parking lot, but they go to the bar, and they stay open until 2 in the morning.  And they do not wear a mask. There’s no way they’re going to wear a mask.”

Another part of the problem, Tanner said, is the fact that the Panhandle is surrounded by Oklahoma, Kansas and New Mexico, and many of those residents are coming to Amarillo-area hospitals.

And the numbers are changing minds.

'I’ll be one of the first to take it': Congressman Michael Burgess says of vaccine

The ranking Republican on the U.S. House Subcommittee on Health, and Congress’ most senior medical doctor, says he will urge his constituents to get a coronavirus vaccine when the time comes.

“Absolutely, when it becomes available,” Congressman Michael Burgess said on Inside Texas Politics.

“If I’m not accused of breaking in line, I’ll be one of the first to take it just to demonstrate that I’ve got absolute confidence in the process and how the vaccine was developed and the science behind it.”

Pfizer recently became the first company to seek emergency use authorization from the Food and Drug Administration for its coronavirus vaccine.

RELATED: Pfizer seeking emergency use of its COVID-19 vaccine in US

Congressman Burgess says once it’s available, it will initially be designated for front-line medical personnel and other citizens at the highest risk.

“As soon as they say go, the vaccine is in the process of being distributed, the cold storage units have been secured, the placement is in fact happening even as we speak, and the vaccine will very rapidly be available,” he said.

And Burgess says the really good news is that Moderna appears to be right behind Pfizer with its own vaccine candidate.

RELATED: Here are the side effects you might feel from a COVID vaccine

“How much rejoicing should there be 10 months after the first case was identified in this country to now have not one, but two vaccines that appear to be 95% effective. That is a rate that’s unheard of," he said.