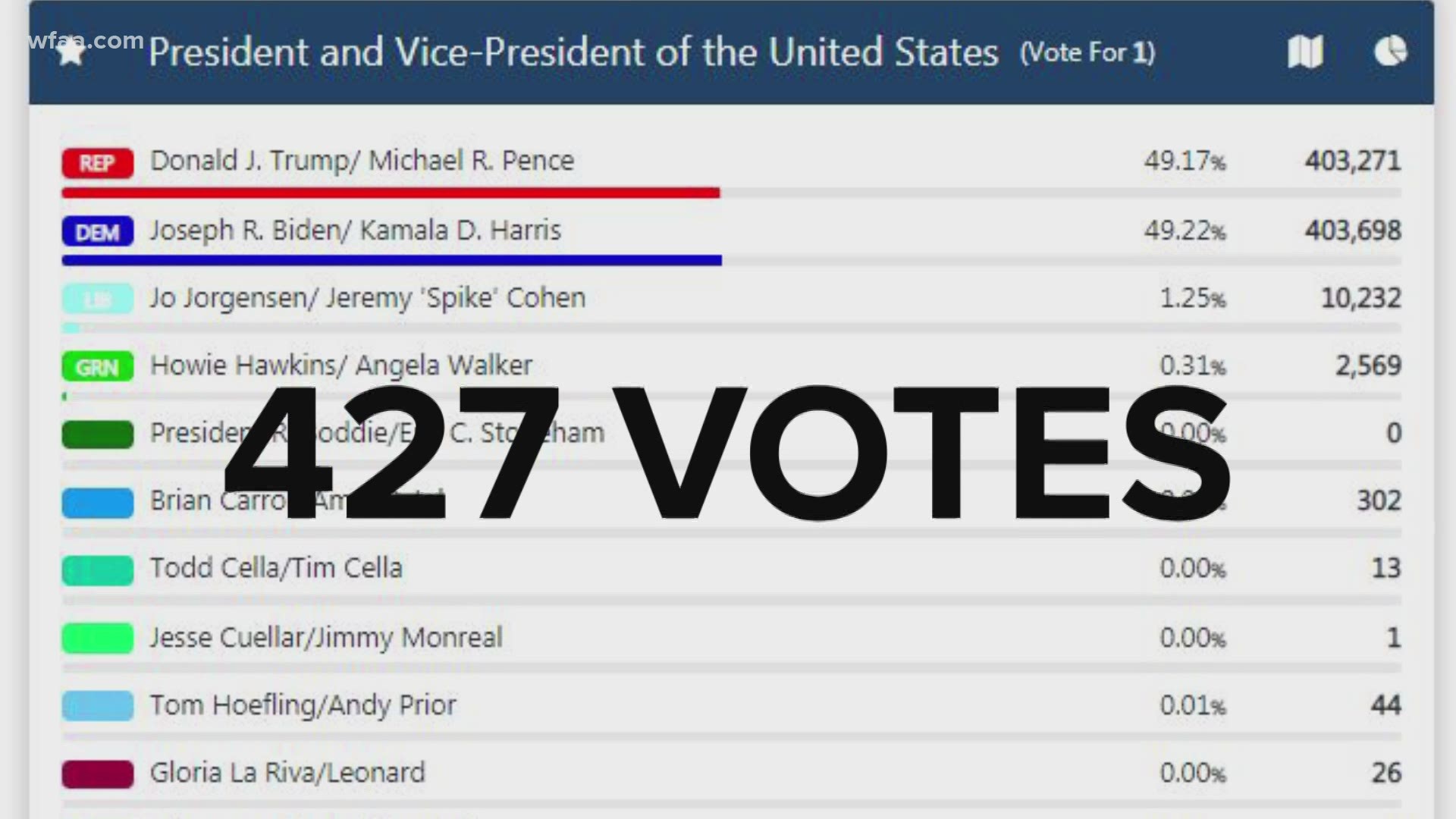 Updated at 6:06 p.m. with statements from Tarrant County Republican and Democratic party officials.

Editor's note: Elections officials are still counting ballots and results are not yet official. Track the latest results here.

Though President Donald Trump has been declared the winner in Texas, former Vice President Joe Biden has taken the lead with the latest results in Tarrant County.

Biden had a 427 vote lead in the county after a new batch of votes were added Thursday afternoon.

Around 824,312 ballots have been cast in Tarrant County, according to the county's election results website.

Tarrant County had a reported 1,185,888 registered voters for the election cycle, per the same website, which meant turnout was 69.51% for this year's presidential election.

The vote count between Trump and Biden was separated by just a mere 427 votes just before 3 p.m. Thursday, according to the county's results website.

Tarrant County officials say members of the Ballot Board from different parties have remade and verified 13,636 defective ballots.

The county says it plans to have all ballots counted by the end of the day Friday. Over 15,000 absentee ballots are pending processing.

Over 15,000 absentee ballots are pending processing which will identify any remaining defective ballots. Counting all absentee ballots received as of November 4 is now estimated to be completed by the end of day on Friday, November 6.

Here's how the vote counts have broken down so far:

The race was not nearly as close for U.S. Senate between incumbent Republican Sen. John Cornyn and Democratic challenger MJ Hegar.

There also were still around 12,000 provisional ballots cast in the election in the county.

WFAA has reached out to the Tarrant County Elections Administration on how many of those have been counted toward the election results and how many remain. County officials have not yet responded, though it could take some time for officials to review the eligibility status of those before they can be counted.

“Is this really where Tarrant County is? Or is this more of an anti-Trump kind of message?" he asked. "I think we have to analyze that as we move forward.

“The reality for this area is the changing demographics. It’s part of what we are having to address. We are going for a younger voter, for example. We are going for a Hispanic, Asian, African American voter. All those are very, very important to the conversation.”

On the other side of the aisle, Tarrant County Democratic Party chairperson Deborah Peoples said Biden's current lead is "thrilling," but the down-ballot races are another story.

“Certainly, I’m thrilled, but I’m also being very reflective about what happened on the down-ballot. And so clearly, we did a good job of convincing voters to vote the top of the ticket, but they didn’t get all the way down the ballot," she said, "Vice President Joe Biden is going to take the lead in Tarrant County, and we don’t plan to let it go.”

For hours Tuesday, the presidential race in Texas was too close to call but, just after midnight, the Associated Press announced Trump won Texas' 38 electoral votes for a second time.

There was a record turnout in the state with more than 11 million ballots cast.

Trump won a majority of the votes in Collin and Denton counties, though the margins were tighter this year as compared to 2016.

But in Tarrant County, once a part of the "Red Wall" in Texas that helped hold up the Republican majority, the picture of who won the county isn't yet clear as ballots continue to be counted.

“I think this is indicative of what we saw across the state with Democrats making some gain, certainly in the popular vote for Biden, but not enough to really push most of these races in the Democratic direction," UNT Department of Political Science chairperson Matthew Eshbaugh-Soha said.