Dallas Fort-Worth elections: Which May 1 races are going to a runoff?

Three of the biggest local races are likely to have another round of voting. 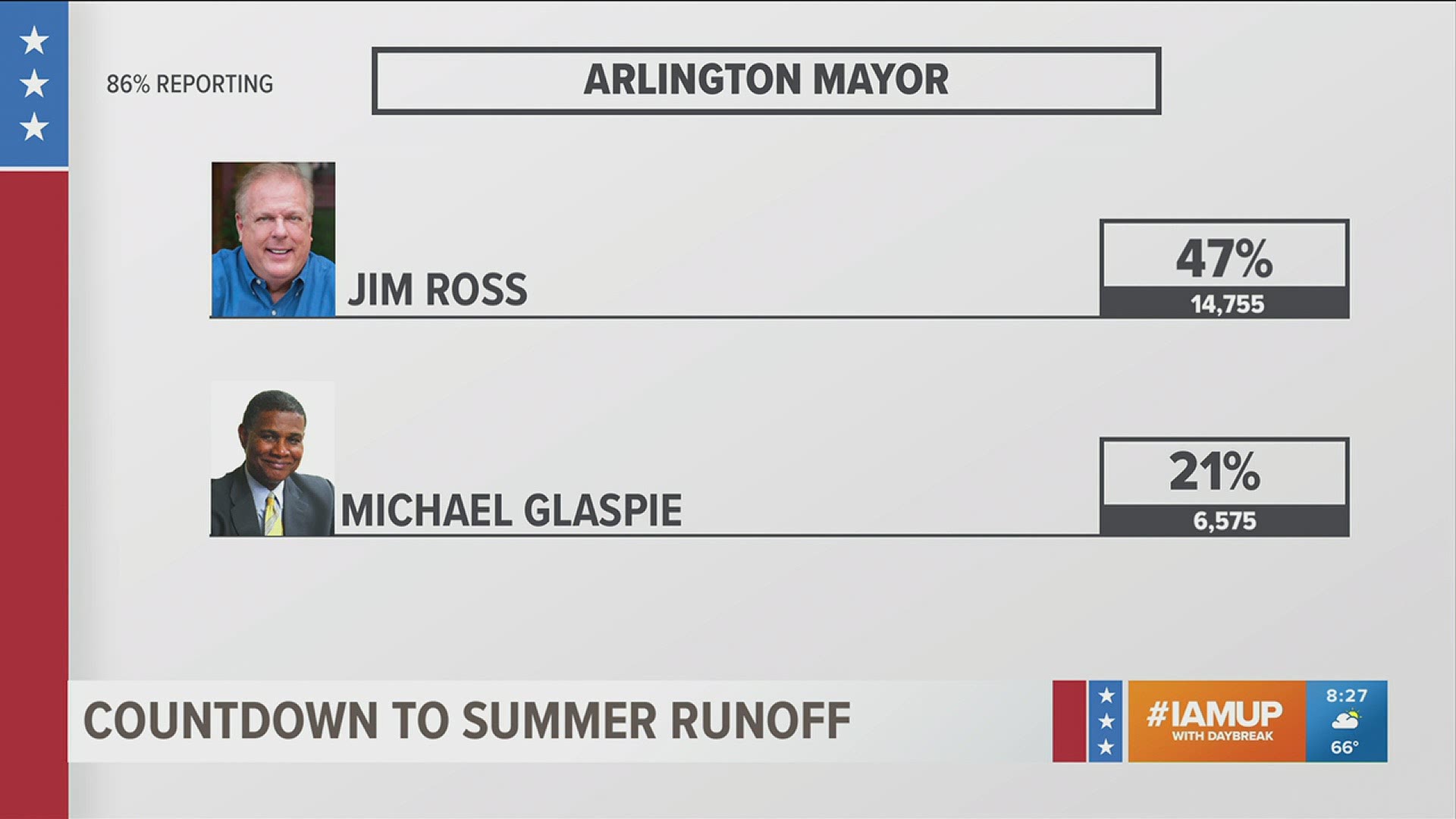 DALLAS — Election Day is over, and the results are being tallied. With so many candidates placing their hats in the ring, it looks like there are going to be a few runoffs later this summer, especially in some of the closely-watched elections.

Many local contests featured five or more candidates each, and the race for Texas District 6 in the U.S. House of Representatives had an eye-catching 23 total candidates.

In cities like Arlington and Fort Worth, there were almost 10 candidates running for mayor alone, and then there are plenty of people who ran for city council seats in those cities and many others, including Dallas.

Plus, there was the rather large selection of candidates voters had to choose from in Tarrant, Ellis and Navarro counties in the race for District 6.

Here's a breakdown of three of the higher-profile races that look to be headed to a runoff. Don't see a race you were looking for? Click here for results in all local elections.

The seat covers part of Tarrant County, in addition to all of Ellis and Navarro counties. Cities in District 6's Tarrant County section include much of Arlington, Crowley, part of Grand Prairie, part of Fort Worth and much of Mansfield, among others.

The seat was left vacant after former Rep. Ron Wright died earlier this year while hospitalized with COVID-19.

Wright's widow, Susan, ran as a Republican to take his seat. She was the lead vote-getter as of Sunday morning with 100% of precincts reporting. She had 19% of the vote with just over 15,000 ballots cast in her favor.

Runner-up Jake Ellzey, also a Republican candidate, came in with 14%, or 10,851 votes. Jana Lynne Sanchez, a Democrat, was third as of Sunday morning with 10,497 votes.

Eleven Republicans, 10 Democrats, one Libertarian and one Independent ran in the race.

More than 78,000 North Texans voted in the race. Gov. Greg Abbott will set the date for the runoff once local election officials canvass the votes and certify the May 1 results.

Eight candidates ran in the race of mayor, although one was declared ineligible due to felony convictions, the Star-Telegram reports.

Jim Ross leads the candidates as 86% of precincts are reporting. Ross so far has garnered 47% of the vote with 14,755 ballots. As more ballots come in, time will tell if he can get to 50% or if a runoff is in the works. As of Sunday morning, Michael Glaspie was in second place with 6,575 votes, or about 21% of the vote.

More than 31,000 Arlington residents voted in the race.

Nearly 68,000 people voted in this race. Fort Worth will hold its run-off election on Saturday, June 5.

Curious about the tally in another election? Click here for the results in all of the local elections.