What do protesters want? Here are 10 demands sent to the Dallas Police Department, local leaders

Some of the ideas and guidance have already been implemented at the Dallas Police Department, such as required de-escalation training for every officer. 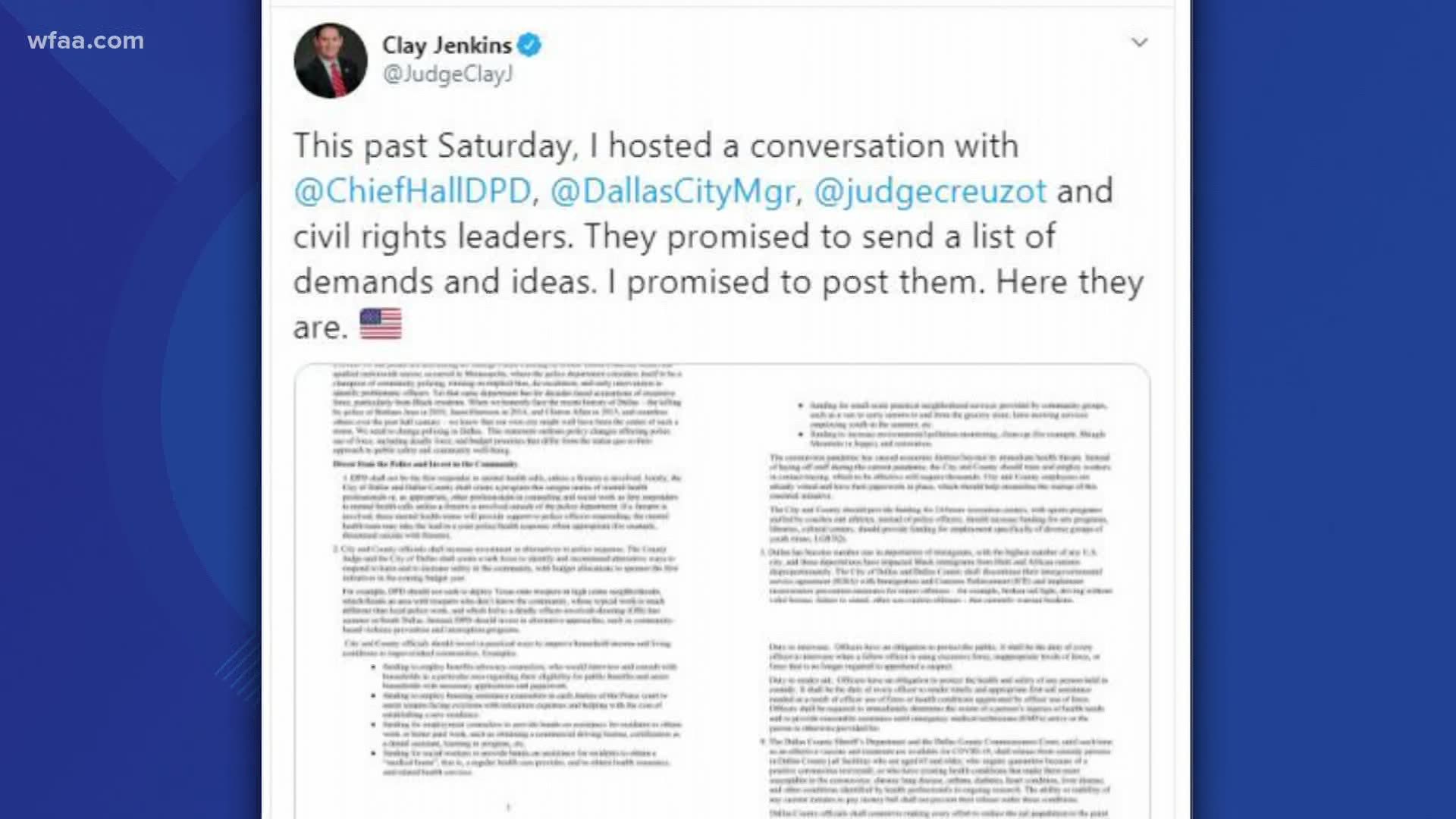 Following George Floyd's death in Minneapolis police custody, there have been growing demands on police departments across the country to implement new policies or strengthen previous ones — including in Dallas.

On Saturday evening, Dallas County Judge Clay Jenkins hosted a conversation with community leaders and elected officials following nationwide unrest over Floyd’s death, which was captured on video as an officer pressed his knee on Floyd's neck.

Some of the ideas and guidance have already been implemented at the Dallas Police Department, such as required de-escalation training for every officer and yearly refresher classes. The department also requires officers to learn about implicit bias.

The department has several non-lethal methods in place to use before drawing weapons. Officers are limited on when they can deploy Tasers.

Knee holds, as was used in Floyd's death, are banned at the Dallas Police Department. A ban on chokeholds was implemented in 2004 after a man died in Dallas police custody.

The department bans officers from shooting into moving vehicles unless the car is headed towards officers and their life is in danger. The group called for officers not to shoot into vehicles, whether parked or moving.

Imam Omar Suleiman called for a release of Dallas officer names who had multiple excessive force complaints against them.

Former Minneapolis officer Derek Chauvin, who is accused of killing Floyd, had 17 complaints and two letters of reprimand filed against him, the Associated Press reported.

"There is a reason why there is such lack of faith in any type of policies on the books now," Suleiman said. "Why do we find out after a man puts his knee on a man that he has 17 previous violations? How many of these people have multiple fatal encounters? ... What’s the policy actually doing to give any faith to the public that these policies are working?"

Hall's response was the department has a new online system for tracking that data and it's currently not able to pull the data.

"What do you do with that when you find it? ... What happens when we know there are officers that have had multiple incidents?" Suleiman asked.

Hall asked the group to reiterate what they are asking her to do.

"I'm supposed to go through the police department and then go back and terminate individuals for things they did years ago?" she said. "Or are you asking me 'Are you committed to identifying those individuals and making sure we’re giving them the proper training and expectation, know that they know policy?'"

The group also called for reinforcing the "duty to intervene" when an officer is using excessive force. The department already has a rule in its general orders for this. This has been a renewed call by activists nationwide after the video of George Floyd's death showed other officers standing by without intervening.

All use-of-force by an officer must be documented and reported, whether it's pepper spray, tasers or a bullet.

A summary of the group's demands are as follows. See a detailed list here.

2. The city should rely on alternates to police response, such as community-based violence prevention and interruption programs.

3. Discontinue their intergovernmental agreement with ICE and implement incarceration prevention measures for minor offenses, like a broken tail light.

5. No armed patrol for officers who are involved in a deadly force incident until investigations are completed.

6. The Dallas Police Department and the Dallas County DA's office should review fatal police shootings from 2000-2018 and look at policy changes that might have prevented a shooting.

7. Fire or furlough officers whose testimony is not credible to be used in court or officers who have multiple complaints of excessive force.

8. Create/review/reinforce policies with “duty to intervene” to prevent officer misconduct and “duty to render aid” to person due to officer conduct

9. Release people over 65 from jail who have tested positive for COVID-19 or have existing health conditions. Reduce the jail population to ensure 6-foot social distancing.

10. Law enforcement must respect diverse communities in the Dallas area. Document their interactions with any and all disenfranchised members of the community.

The group from the community who were in the meeting included Rev. Michael W. Waters, Brittany White from Live Free Campaign, Sara Mokuria and John Fullinwider from Mothers Against Police Brutality, Jodi Voice, Kristian Hernandez and pastor Frederick Haynes. 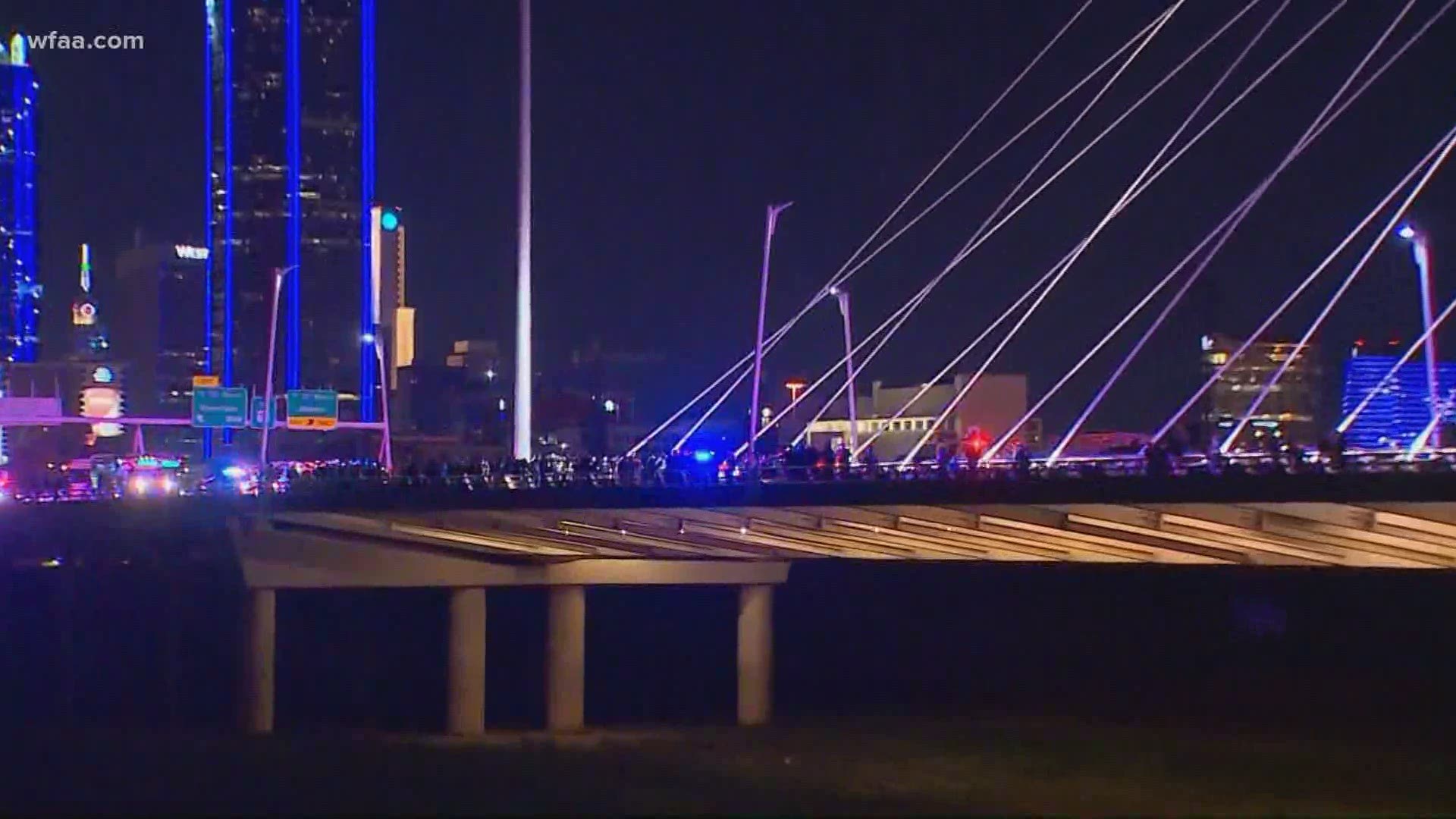