Jones said there are some theories about why there's a summer surge this year. 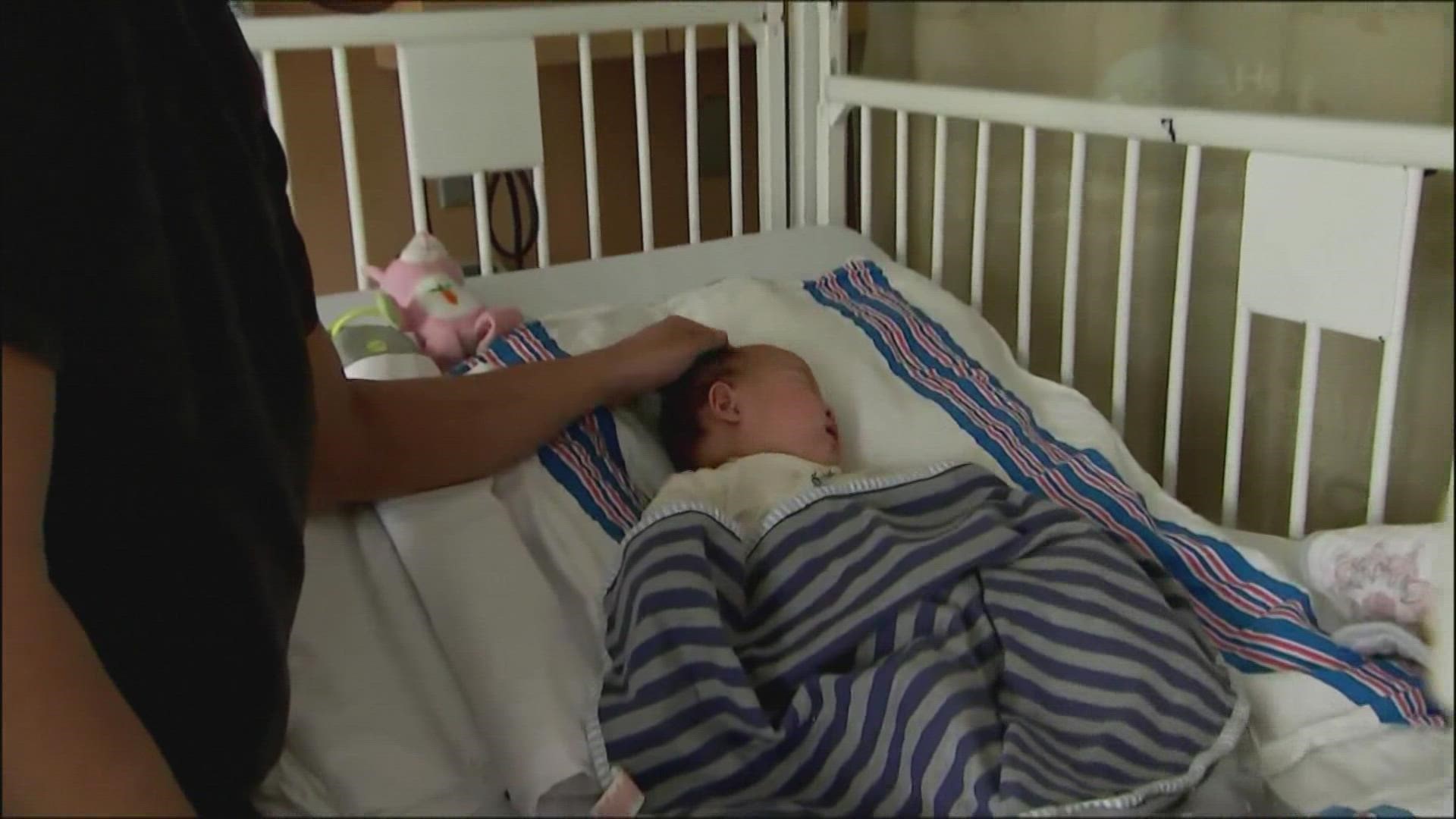 TARRANT COUNTY, Texas — In late July, Kimberly Lee noticed her 2-year-old, Annabel, had a mild cough. The next day she noticed she had a high fever.

"I didn't think anything of it," Lee said. "I thought she was just teething or something."

But the fever wouldn't let up.

“The cough was worse, she was getting a snotty nose, the sick-looking eyes and she still had a high fever," said Lee.

She took Annabel to the doctor where she was diagnosed with respiratory syncytial virus, or RSV, a respiratory virus that is common in young children.

Lee said Annabel seemed to be on the mend after she was diagnosed, but when she stopped eating and drinking she had to be admitted to Cook Children's.

She was there for two nights, until she was able to regain strength and fluids. Lee said her oxygen levels fell, but she thankfully didn't need extra oxygen or help breathing.

“During the winter, it’s not unusual to have a large number of beds with kids in them with RSV," Russ Jones, the manager of epidemiology and health information for the Tarrant County Public Health Department, said.

RELATED: Summer spike of RSV cases unlike anything North Texas doctors have ever seen

On Friday, Cook Children's reported it's seeing about 200 cases per week. This week, the DFW Hospital Council reported 150 pediatric patients on ventilators, but only 66 pediatric COVID hospitalizations, citing an "unusual" number of RSV patients for the season.

Jones said there are some theories about why there's a summer surge this year.

“For the last year and a half, a lot of us have been in these. In masks. We were also social distancing," Jones said.

He said, since the spring, there's been a lot less mask wearing and social distancing and a lot more contact. While RSV doesn't typically show itself as a severe infection in adults, adults can transmit it to young children.

"We didn’t go through the typical season like we did before, so we probably have a lot of susceptible people, so we’re seeing it during the non-winter season that we typically do," Jones said.

The department, in collaboration with the CDC, reported data that showed the positivity rate for RSV in the county hit higher than 50% in July, and is currently more than 36%. In 2020, it hovered around the 1% mark for the entire summer and was only slightly higher for summer 2019.

The county's 0-4 age group has the highest percentage of ER visits for RSV out of all of the county's age groups.

The hopeful news is the numbers in Tarrant County are slightly starting to dip going into August.

Jones said there isn't enough data to know if RSV makes children more susceptible to contracting COVID-19, but he said kids can have both at the same time.

“There is not a vaccine for it, and the treatment as I understand it, is supportive care," Jones said.

For this reason, Jones said a lack of pediatric ICU beds in North Texas is concerning as pediatric COVID cases and RSV cases rise.

Jones said the best way to protect kids from RSV is to stay away from small children if you feel like you have a cold, wear a mask and wash your hands. He said symptoms are typically mild at first, so if you notice your small child has flu-like symptoms, monitor them for a few days.

RSV can cause infants to struggle to breathe, or stop breathing. He said, if you notice that, to call your pediatrician immediately.