Will the tower ever come down? 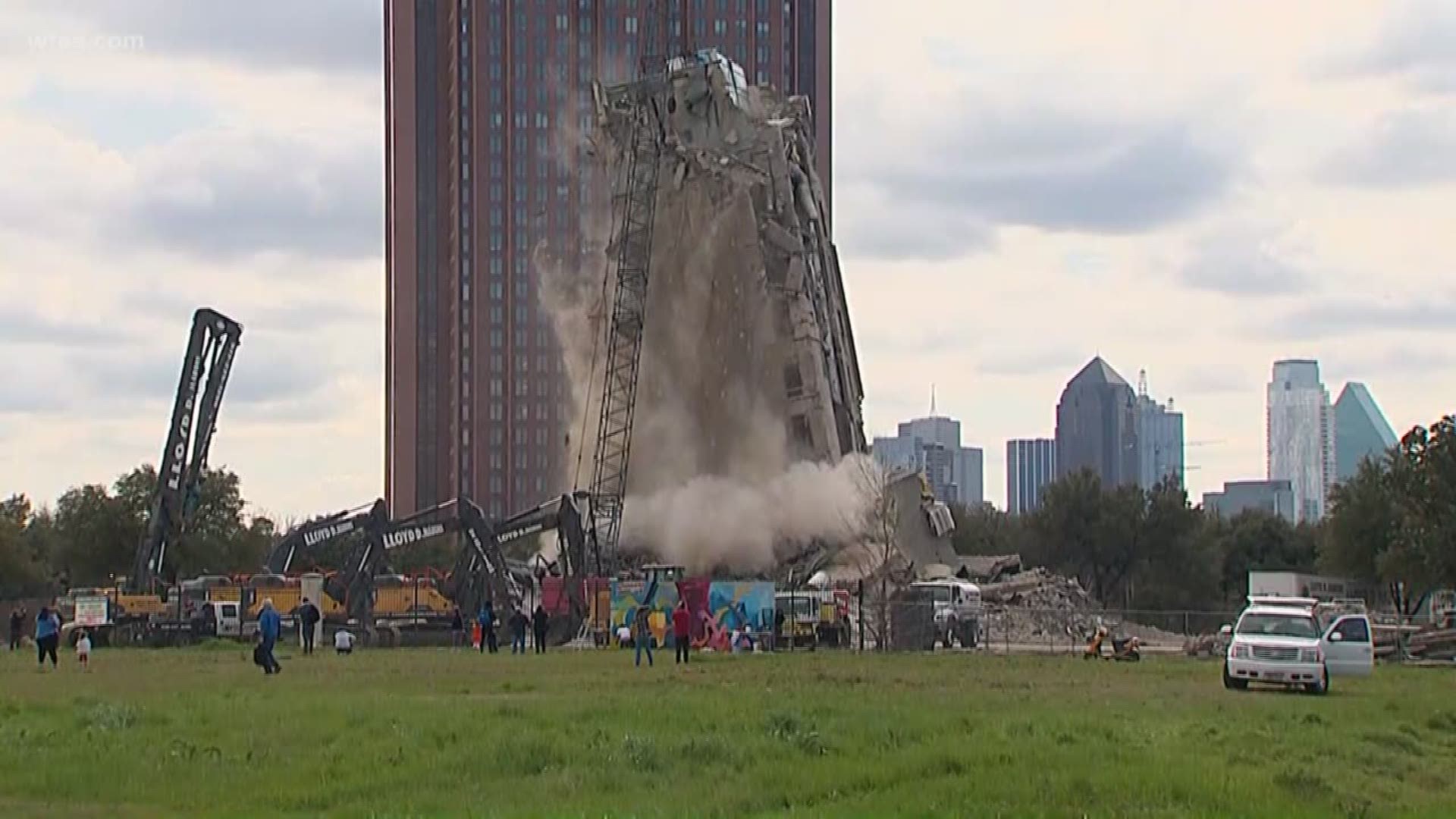 Updated with details about progress Tuesday.

Day two of the demolition process began Tuesday morning as construction crews work to bring down the core shaft of an 11-story building that was imploded on Feb. 16.

Around 1 p.m. on Tuesday, crews changed out the wrecking ball for a new one, and about 10 minutes later, a large chunk of the building could be seen falling to the ground.

Nabors Demolition confirmed to WFAA that the new wrecking ball is the same weight (5,600 pounds) as the one used Monday – it’s just a different shape. They would not elaborate on why the shape of the wrecking ball was different.

Nabors Demo said the wrecking ball alone is not supposed to demolish what’s left of the building. They told WFAA that the wrecking ball will take the remaining structure down four to five floors. Then crews will use a high-reach excavator, which is already on-site, to finish the job.

Some have wondered why a bigger crane wasn’t brought in to handle a bigger wrecking ball. Nabors Demo told WFAA that due to “size constraints of the site” and “crane availability,” crews had to use the current crane and wrecking ball.

While the rest of the building collapsed on Feb. 16, crews are now working to remove the core that contained the elevator and stairwells.

The 'Leaning Tower of Dallas' became an immediate icon across the city, with people flocking to the area to take photos with the building and a petition to save it cropping up.

On Tuesday night, the Richards Group projected an ad for one of its clients, the Choctaw Casino, onto the building.

"We couldn’t help but look outside our window at this partly demolished building and see an opportunity," The Richards Group said in a statement Tuesday.

The building is the former Affiliated Computer Services building, according to information released on Feb. 21. Xerox announced it was acquiring ACS in Sept. 2009, and in 2015 Xerox hired commercial real estate firm Cushman & Wakefield to market the building.

While the public got time to take their photos, crews were working to bring in a crane and wrecking ball to begin the process of taking the tower down piece by piece.

It took about a week to get the necessary equipment, with Monday being the first demolition day in what had become a highly anticipated public event.

And then people saw it — what looked like a rather small wrecking ball "bumping" against the tower to try to bring it all down.

That in and of itself became its own storyline in the saga of the tower Monday.

The ball even got its own Twitter account. The tower, naturally, already had its own as well.

But the size of the wrecking ball isn't actually that uncommon.

"That wrecking ball is not all that tiny," structural engineer Stan Caldwell told WFAA.

Caldwell, who is not affiliated with the demolition, has almost 50 years of experience in the field, having worked on more than 800 projects throughout his career.

"The steel shell [of the wrecking ball] is likely filled with lead, which weighs 709 pounds per cubic feet," he said.

He explained the wrecking ball is a safe size for the project and adequate for the "piecemeal" way crews are using it to bring down the tower.

A spokesperson for Lloyd D. Nabors Demolition, the company behind the work, echoed that sentiment, saying the ball weighs 5,600 pounds and is the right size for the crane being used based on federal safety regulations.

On Monday, crews believe it will take three to four days to bring the tower down using the current set-up. On Tuesday, a news release from De La Vega Development, Nabors Demo and Ashler Projects said the demolition "may take several days, or weeks."

What will go in its place?

Crews are working to clear the area to make room for The Central, a $2.5 billion development made up of residential, hotel, restaurant, entertainment and retail space that will take up 5 million square feet.

“Anything that makes people happy, makes people feel good, will be a part of this project,” Developer Artemio De La Vega told WFAA. “Dallas deserves first-class and that’s our mission, our mission is to deliver first-class to the citizens of Dallas.”

An art exhibit is also now part of the plan for the development-- it will feature photos and other memorabilia of the now-infamous leaning tower.

More on the 'Leaning Tower of Dallas:'