Texas' second-largest school district will give families an in-person or virtual option. 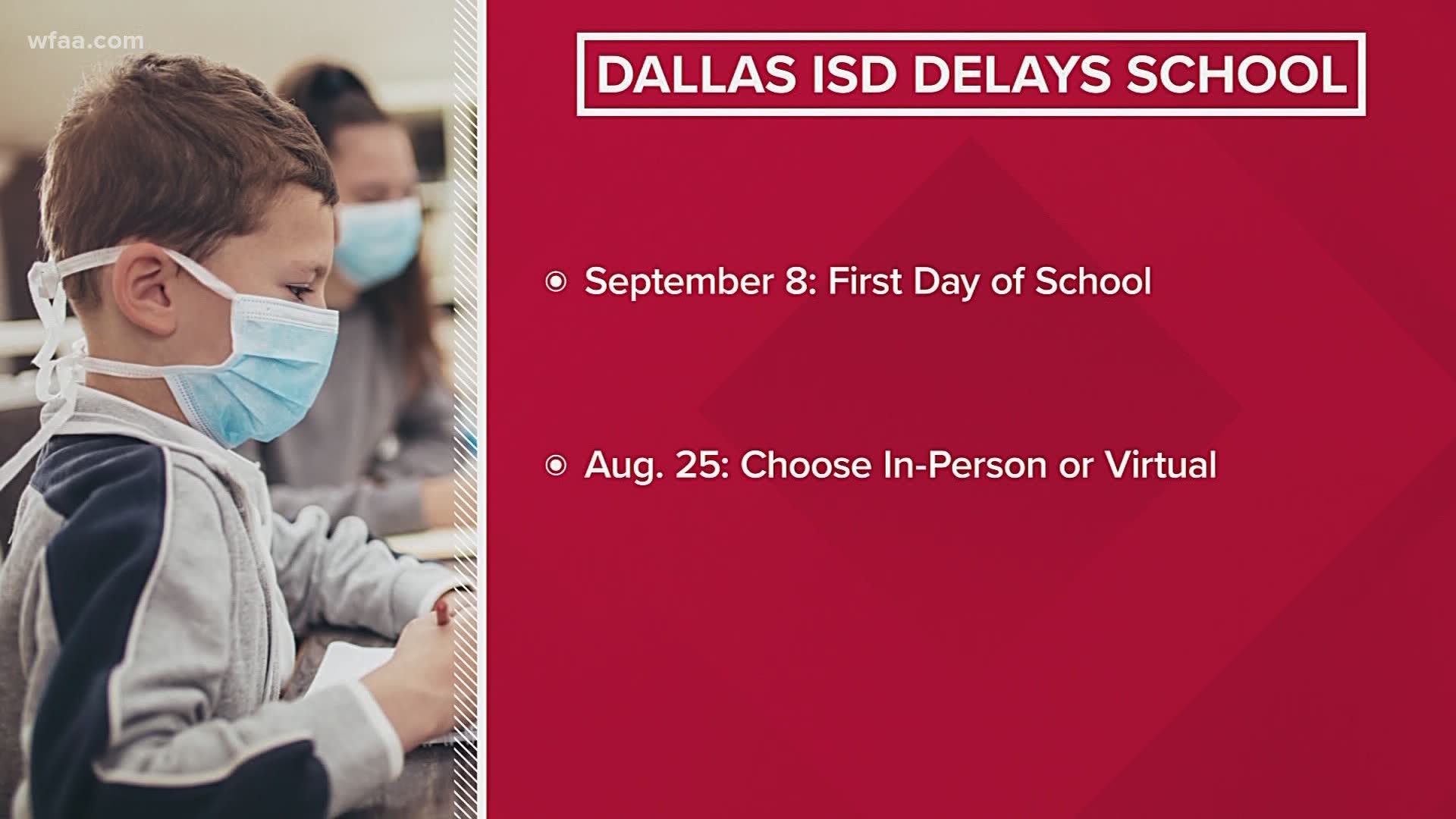 Dallas ISD trustees voted Thursday to adopt a calendar that will start the school year on September 8. For now, families will have a choice between the in-person or virtual option.

The district shared the new schedule in a tweet Thursday night.

The Dallas ISD Board of Trustees just approved these changes to the school year calendar. pic.twitter.com/7yHo5DpUCE

Superintendent Michael Hinojosa proposed both in-person and virtual learning to begin on Sept. 8 during a specially called meeting of the Board of Trustees.

Under the new calendar, the district will drop three-day weekends in October and add a holiday for the general election on Nov. 3.

The last day of classroom instruction will fall on June 18, approximately three weeks later than a traditional schedule.

Parents have until August 25th to inform the district if their student is learning in-person or online. Grading weeks have been changed from six to nine weeks as well, and Hinojosa said students who commit to online learning cannot resume in-person classes until a nine-week grading period is over.

Students who attend class in person may switch to online learning at any time.

Hinojosa also told WFAA that when school begins on September 8, he has an executive authority lasting four weeks that allows him to push classes fully online if COVID-19 cases haven't decreased or leveled off.

After the four weeks, board members then have the option to push classes fully online for another four weeks if things haven't gotten better.

During those eight weeks, the district can't lose funding from the state.

Meaning, classes could be fully online until earlier November if Dallas County sees a major uptick in cases.

Hinojosa hopes to see blended learning when the school year starts but told WFAA that he'd let the science decide.

Dozens of people signed up for public comment Thursday night, including parents and teachers. They asked the board to made decisions for the safety of children, teachers, and staff, including those with underlying health conditions.

Hinojosa also told WFAA that teachers can request to teach fully online, but that request has to be filed with their principal.

Many were in favor of the school calendar changes with some of the speakers proposing moving in-person learning to the beginning of 2021 and others asking in-person lessons to wait until cases and deaths are in an extended decline.

"We can always catch up a student, but we can't bring back a life," one woman said."One life lost is one too many."

One teacher, who said she has taught in the district for seven years, said when she became an educator she was ready to sacrifice her life for her students in the event of a school shooter.

"I was ready to sacrifice my life... but I thought it would be my choice," she said. "Please give us a choice and protect us even if our state and national governments don't."

An executive order from the Dallas County Health and Human Services department on July 16 prevents public and private schools from opening in the county through Sept. 7.

The order delayed the planned start in the Dallas district on Aug. 17.

According to school district records, at least 60 members of the public were signed up to speak at the meeting which begins at 3 p.m. at the Turney W. Leonard Governance and Training Center at 5151 Samuell Blvd. in Dallas.

Due to the pandemic, all those signed up to speak did so virtually. Those wishing to watch the meeting can do so online by clicking here.