James Leavelle, the Stetson-wearing Dallas detective who was handcuffed to Lee Harvey Oswald when he was shot, is dead at 99. 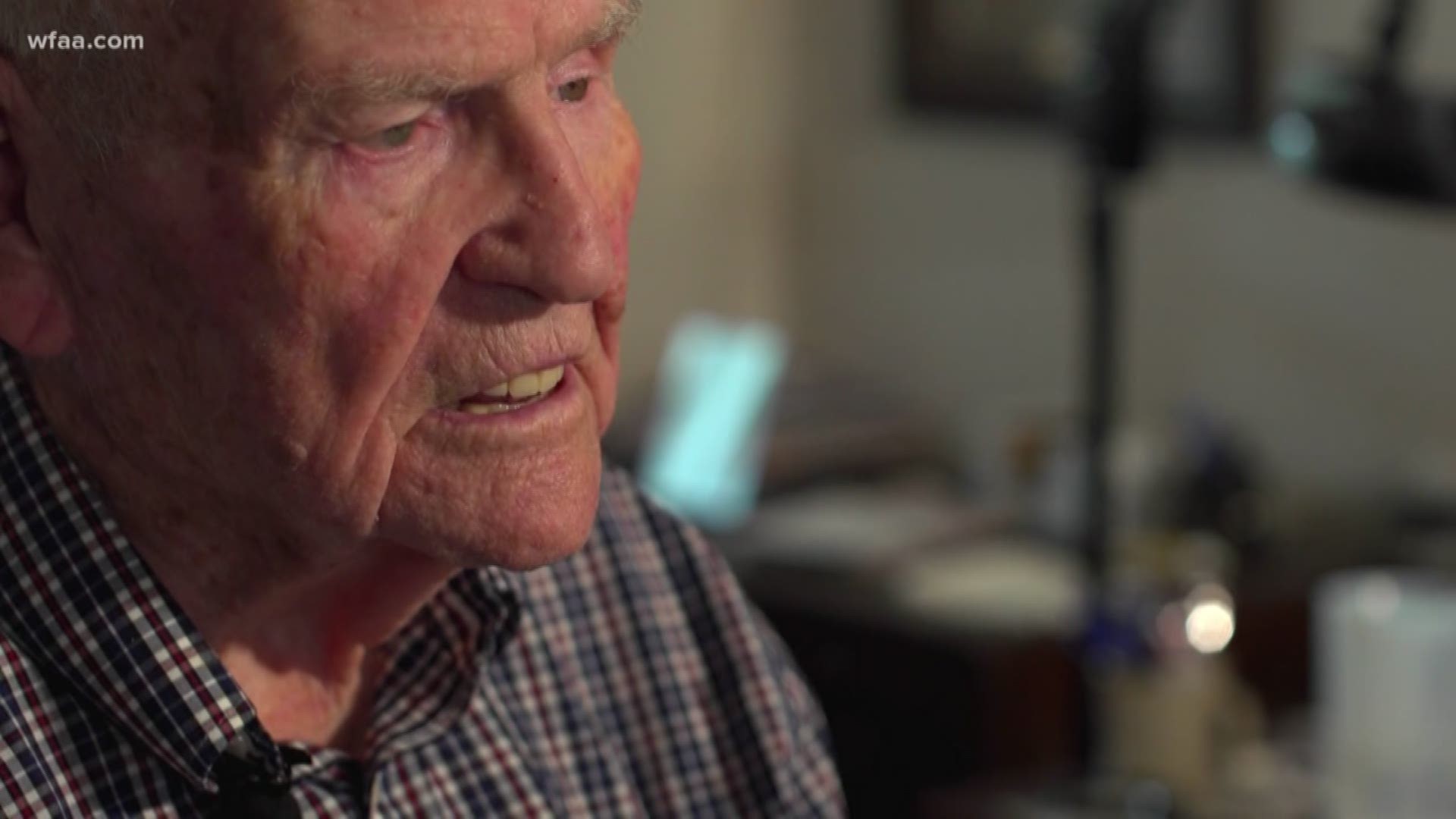 DALLAS — James Leavelle, the Stetson-wearing Dallas detective handcuffed to Lee Harvey Oswald in one of the 20th century’s most iconic photographs, died Thursday morning at age 99.

Leavelle died during a trip to Colorado while visiting his family to celebrate his 99th birthday, said Kate Griendling, Leavelle's granddaughter.

"We put 99 candles on his birthday cake and blew them all out and just had a great time," Griendling told WFAA. "But he fell Monday and broke his hip. He was taken to the hospital and died from a massive heart attack this morning."

Leavelle was the Dallas police detective in the beige suit and matching Stetson hat who was handcuffed to Oswald when nightclub owner Jack Ruby pulled the trigger two days after President John F. Kennedy’s assassination.

Leavelle is immortalized in the famous Bob Jackson photograph of the shooting.

Credit: Bob Jackson
Lee Harvey Oswald, suspected assassin of JFK, shot to death at point-blank range by Jack Ruby in basement of Dallas police headquarters Nov. 24, 1963. Plainclothes officer to the left of him is Jim Leavelle in the white suit and Stetson.

For years, the retired Dallas detective would graciously recall to most anyone what he witnessed on Nov. 24, 1963.

"Actually, on that particular day I was supposed to have a day off more or less,” said Leavelle in a 2017 interview with WFAA. "[Oswald] was very polite to me, answering my questions without fussing or anything. The only mistake he made was one question I asked about shooting the officer. He said, 'I didn't shoot anybody.'"

Leavelle volunteered to transfer Oswald from the Dallas Police Department to the Dallas County jail.

"I had to get him ready for the transfer,” Leavelle told WFAA. "He wanted to put on that black slip-over sweater that he had on. I let him put that on. As he was putting it on, I said to him, 'Lee, if anybody shoots at you, I hope they're as good a shot as you are, meaning they would hit him and not me.'"

"He said, 'Oh, nobody's going to shoot at me,’” Leavelle said. "I said I'm going to handcuff myself to him. If anybody tries to take him, they've got to take me too and I'm not going to go quietly. They're going to have a little problem on their hands."

Ruby had entered the basement of police headquarters and stood alongside reporters and photographer. As Leavelle walked Oswald out, Ruby stepped forward and pulled the trigger, shooting Oswald in the torso.

"Ruby still had a hold of his pistol and was attempting to fire [again] until Leavelle's partner, Det. L.C. Graves, was able to disarm Ruby," said Farris Rookstool III, a Dallas historian. "I knew Jim Leavelle for almost 40 years. We became friends and he often assisted me during my time with the FBI answering JFK assassination-related questions."

“He went completely blank," Leavelle said. "Instantly. He was out by the time he hit the floor."

Leavelle was one of the last surviving individuals directly associated to the Kennedy assassination and Oswald murder.

"Jim will be forever frozen in time and remembered for what he called his biggest failure ⁠— protecting his prisoner," Rookstool said. "The Dallas Police Department didn't hold him personally responsible for the death of Oswald. In fact, they named a Dallas police detective award after him."

"We often wondered how his life might have been different had they transferred Oswald in the middle of the night or the Sunday morning interrogation did not run long," Rookstool continued. "Oswald would have been transferred before Ruby got there and Leavelle would have just remained a humble, unknown police detective who merely did his job."

“I had the man upstairs looking after me," he said. "I got shot at three times where the bullet came within an inch of my head. My legacy? I just want to live a long time and before I die get well again. That's it."

STATEMENT FROM THE LEAVELLE FAMILY:

James Robert Leavelle, the Dallas police detective who was handcuffed to alleged JFK assassin Lee Harvey Oswald when he was shot by Jack Ruby, passed away Thursday, Aug. 29, 2019, shortly before noon. He had broken his hip in a fall a few days before and died due to complications after the surgery.

Leavelle had spent the weekend at his daughter’s house in Colorado, celebrating with his 99th birthday. He was joined there by his three grandchildren and great grandson.

While we mourn his passing, we celebrate his life, one that seemed to find history. He was also at Pearl Harbor on Dec. 7, 1941, aboard the USS Whitney when the U.S. naval base was bombed by Japan, precipitating the U.S. entry into World War II.

But in our family, he was simply “grandpa.”

“He was the quintessential grandfather,” said his son-in-law Robert Griendling, who is married to his younger daughter, Karla Leavelle. “Our three children adored him for his kindness, sense of humor and his unwavering support and encouragement he always gave to our children.”

“Dad was a disciplinarian and instilled in us the confidence to reach for the stars,” said Karla Leavelle. “A simple man of modest means, he thought we could do anything we put our mind to.

He was also a kind man and loyal friend to those he loved.”

His granddaughter Kate, a television producer, created, wrote and co-produced a documentary in 2013 called “Capturing Oswald” that chronicled how the Dallas police apprehended Lee Harvey Oswald in 88 minutes after the Kennedy assassination.

“He always emphasized that what he enjoyed most about his police work was helping people,” Kate Griendling said.

“We had a very special bond that survived the many political arguments between a southern and his Yankee granddaughter,” she said. “And I’ll always treasure our trip to Hawaii to remember Pearl Harbor and our return to the site of the World War II hospital where he met my grandma.”

Leavelle was married to the former Taimi Trast for 72 years before her death in 2014 at age 95.

She was an accomplished woman herself, working as a nurse for more than 50 years. They met when he was returned to the States from his ship in 1942 after an on-board accident. She was part of the team that cared for him. Because she was an officer and not allowed to have a relationship with an enlisted man, she resigned her commission to marry Jim.

Jim made time for everyone, including the hundreds of strangers who would call, write or visit him just to interact with the man who was so much a part of our shared history.

The family would like to thank all those who’ve offered condolences and to those who loved and cared for him as he lived independently to the very end. He had a large circle of relatives and colleagues from the Dallas Police Department and other law enforcement agencies who watched over him.

Though the photo may be the most iconic moment in his career, and keep him in the history books for future generations, the Dallas Police Department and the officers who served with him know that he is worthy of a legacy for being one of the smartest, accomplished and dedicated detectives in the history of the DPD.

It is never easy to lose a member of our blue family, but we give thanks for his service and his dedication to honoring our profession. Our thoughts and prayers go to his family as our department and the city mourn this loss.

RELATED: Oswald leaves behind a Fort Worth legacy, too: brawls, bitterness and a hidden gravestone