Investigators told WFAA they have concluded that the explosion was caused when a suspect fired into an apartment, hit a stove and severed a gas line. 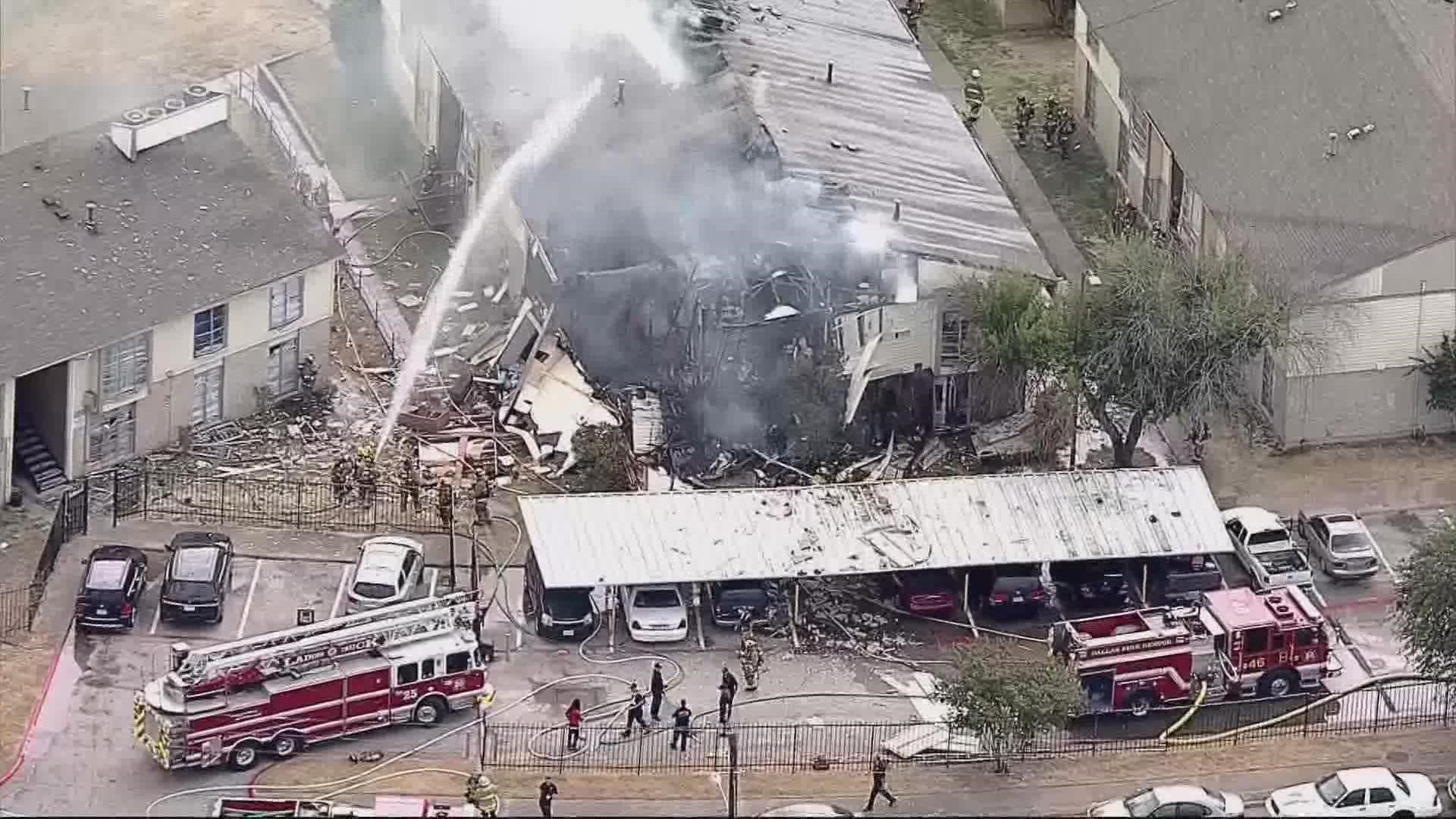 DALLAS — Dallas police say an explosion that injured four firefighters and injured several other people at a southern Dallas apartment complex last month was triggered by a suspect who fired into an apartment, hit a stove and severed a gas line.

Late Tuesday afternoon, detectives obtained seven deadly conduct warrants in connection with the blast. Investigators said the incident is connected to an ongoing domestic dispute between the suspect and his girlfriend.

Jail booking records show 28-year-old Phillip Dankins was booked into the jail Oct. 3 on charges of aggravated assault, a drug charge and being a felon in possession of a firearm.

First Assistant Chief Al Martinez said investigators were able to match a shell casing found at the scene to a weapon Dankins had.

Word that charges had been filed against the suspect came as welcome news to the families of the injured firefighters.

"For us and our family, it's an incredibly emotional day," said Brendan Gadomski, the brother of injured fire Captain Chris Gadomski.

Brendan Gadomski, a Dallas police senior corporal, said he was thankful for the hard work of the detectives who worked on the case.

"They've done incredible work and hats off to them," he said.

"The injuries that he sustained in the blast are pretty severe and the fact that he's as positive as he is is beyond me," Brendan Gadomski said. "Hopefully, the worst is behind him, but he's still got a long road."

Brendan Gadomski said he was also thankful to the doctors and staff at Parkland who have given his brother and the other firefighters such amazing care.

If you'd like to help Gadomski and the other injured firefighters with unforeseen costs associated with their injuries, a GoFundMe has been created.

Credit: Brendan Gadomski
Fire Capt. Chris Gadomski has come a long way since this photo was taken. His brother says his brother is determined to return to firefighting.

The explosion happened Sept. 29 at the Highland Hills Apartments, near Bonnie View and Simpson Stuart roads.

Firefighters responded about 10:20 a.m. to a 911 call about a natural gas leak, and when firefighters arrived, they smelled gas near the apartment building's gate entrance.

While the firefighters were investigating the smell of gas, the explosion happened, causing a large fire and leading to part of a two-story apartment building to collapse. Eight people - including four Dallas Fire-Rescue firefighters - were hurt in the explosion. All are expected to recover.

Residents at the complex whom WFAA spoke to did report hearing gunfire and smelling gas the night before the explosion.

Police records show Dankins was identified as a suspect within days of the explosion.

Investigators interviewed Dankins' girlfriend. She told police that on Sept. 26, he chambered a round and pointed a gun at her while she was carrying their 8-month-old son. She told police that Dankins "chased after her with the loaded gun," but did not fire the weapon," according to an arrest warrant affidavit.

On Oct. 2, Dallas police got word that Dankins had fled from Mesquite police who were investigating a robbery call, police records show. Officers converged and he was soon taken into custody. Officers, with the help of a police canine, also recovered a backpack that he had discarded. A handgun and cocaine was found inside it, records show.

Credit: Brendan Gadomski
Capt. Chris Gadomski with his nephew. Family members say they are very close and he taught his nephew how to fish.

Brendan Gadomski said he hopes that his brother will be released to rehab facility next week.

His brother is determined to one day return to firefighting.

"My brother couldn't move his arms or his fingers just literally a week and a half ago," he said. "He got them raised up just enough to say, 'Get me that axe in my hands,' and he wants to get back at it."