3 firefighters remain hospitalized in critical condition, 5 others released after explosion at Dallas apartment

The fire at 11 a.m. was still producing flames and heavy smoke, and at least half of the apartment building appeared to be badly damaged. 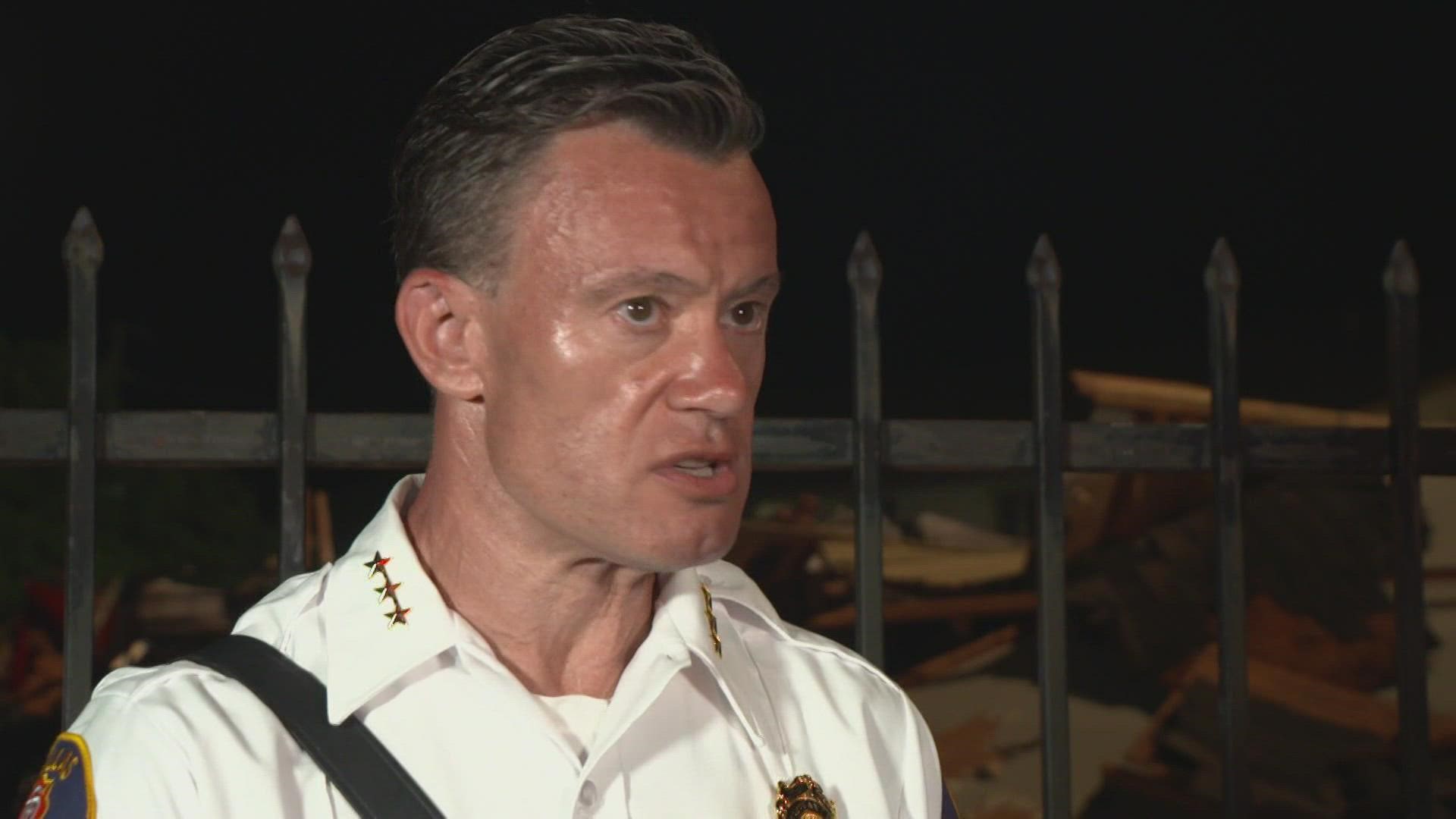 DALLAS — This story will be updated throughout the day Wednesday as new information comes in.

Eight people were injured Wednesday in an explosion at an apartment building in southern Dallas, including four Dallas firefighters and four others who are in critical condition, officials said. As of Thursday morning, one firefighter and four other people have been released from the hospital.

The three firefighters are still being treated for their injuries. The firefighters were responding to a report of a natural gas leak at the apartment building when the explosion happened.

Seven of the victims were taken to Parkland Hospital and one was taken to Baylor.

Dallas Fire-Rescue spokesman Jason Evans initially said two of the firefighters were in critical condition, but that number later changed to three.

All four of the injured firefighters were taken to Parkland. All are expected to survive, but it will be a long road to recovery.

One of those firefighters was injured helping people out, sources tell WFAA. He has minor injuries, and has already been released from the hospital. Here’s what we know about the other three who are still at Parkland:

The injured firefighters have not been identified, but the Dallas Fire Association said they belonged to Fire Station 25, just northwest of where the explosion happened.

JUST IN: all four firefighters @Parkland due to apartment building explosion were with Station 25.

Per Dallas Fire Fighter Association President: “Some of our best, most knowledgeable, and experienced,” due to area they serve. (@wfaa) pic.twitter.com/BJp4qbzKyg

Wednesday afternoon, Dallas Police Chief Eddie Garcia, Mayor Eric Johnson and many folks with Dallas Fire-Rescue and the Dallas Firefighters Association came to the hospital to check on the firefighters.

Parkland confirmed it was treating three civilians — two males and one female —and that they were in fair condition. Baylor is treating the other civilian. All were listed as stable Wednesday afternoon and discharged from the hospital Wednesday night.

Officials said later Wednesday they are optimistic that the firefighters in the hospital will survive and have a full recovery.

"As any chief would do, when you hear a mayday call from your firefighters, your heart sinks, because that means somebody's trapped or injured," Dallas Fire-Rescue Chief Dominique Artis said Wednesday. "Like we do as firefighters, the muscle memory kicks in, our training. Our men and women were so brave in the efforts they did today, those incoming crews as well as some help from civilians, I'm hearing, also were able to help us get our folks out of the rubble. We're going to be praying and we ask each one of you to be praying for these members."

Update on Highland Hills explosion: 1 firefighter discharged from hospital, and 3 hospitalized. 1 additional civilian transported for a total of 4. All residents accounted for. https://t.co/KG4sVnrUeH

The firefighters responded about 10:20 a.m. to a 911 call about a natural gas leak at an apartment building at 5726 Highland Hills Drive, near Bonnie View and Simpson Stuart roads, about one mile west of Interstate 45, according to Dallas Fire-Rescue.

Dallas Fire-Rescue Assistant Chief Justin Ball said following the explosion, the department deemed that the building was unsafe for a real thorough investigation.

Ball said everyone in the complex had been accounted for except for one person, so a mini drone was sent in to search.

"During the time we were using the drone, we actually contacted the resident that we were looking for that was supposed to be in that unit, and we talked to that resident, so then we were good," said Ball.

Then, the search was called off.

Crews from Atmos Energy, the natural gas provider, could also be seen at the scene following the explosion, working with firefighters.

Atmos said crews verified that the gas was shut off to the meter that supplies the complex and its "highly trained technicians began performing safety checks" of the system.

At least four fire trucks were at the scene, along with several other fire vehicles, as crews worked to put out the fire.

Ball said the building of the explosion was unsafe to remain standing, so it was decided to demolish it.

A woman who spoke with WFAA said she was at her mother's nearby apartment when the explosion happened. The blast shook the apartment. When they ran outside, the woman said they saw lots of smoke and people running away from the apartment building.

#BREAKING Large fire in Southern Dallas after an apparent “explosion” of some kind. A woman who was visiting her mom’s apartment describes what she heard and saw. pic.twitter.com/W9GnKbSLPv

Residents recover and how you can help

The City of Dallas Office of Emergency Management is in the process of coordinating resources and assistance for approximately 300 residents out of an estimated 200 households from these apartments. The Red Cross is helping the residents at an emergency relief site in the Tommie M Allen Recreation Center.

"All buildings in the complex will undergo a thorough investigation and inspection process to allow residents’ safe return," said the Office of Emergency Management in a news release.

The City is going door-to-door, texting, and calling affected residents and will continue reaching out in all ways possible, the office said.

Donations of comfort items are not being accepted, but residents interested in providing support are urged to contribute to the Dallas Foundation’s Disaster Relief Fund or the Red Cross.

Investigative reporter @tanyaeiserer and I speaking with DFR Chiefs Ball and Salazar about today’s natural gas explosion at the Highland Hills Apartments in Southern Dallas. 8 Apt units were demolished because they were so unstable.
What caused it? They don’t know right now. pic.twitter.com/P41CZIa1C8

What caused the explosion?

Mayor Eric Johnson addressed the explosion but said it was "premature" to talk about the cause of the explosion and why it happened.

"If it is a gas leak, that's something we need to be very, very serious about looking into and understanding why that happened," Johnson said.

In a statement Wednesday evening, Atmos Energy said, "our system is operating as expected, and we have found no indication that our system was involved."

Evans said residents in the apartment complex reported that the smell of gas began as early as Tuesday night.

"There is currently no indication as to what caused the explosion, but Investigators will work with multiple local, state and federal agencies, to determine exactly what happened," said Dallas Fire-Rescue, Wednesday night.

This story will be updated as more information becomes available. Download our free WFAA app to stay up-to-date on all news stories in the Dallas-Fort Worth area.