The implosion began at 7:45 a.m. but the tower still hadn't come down as of Sunday evening. 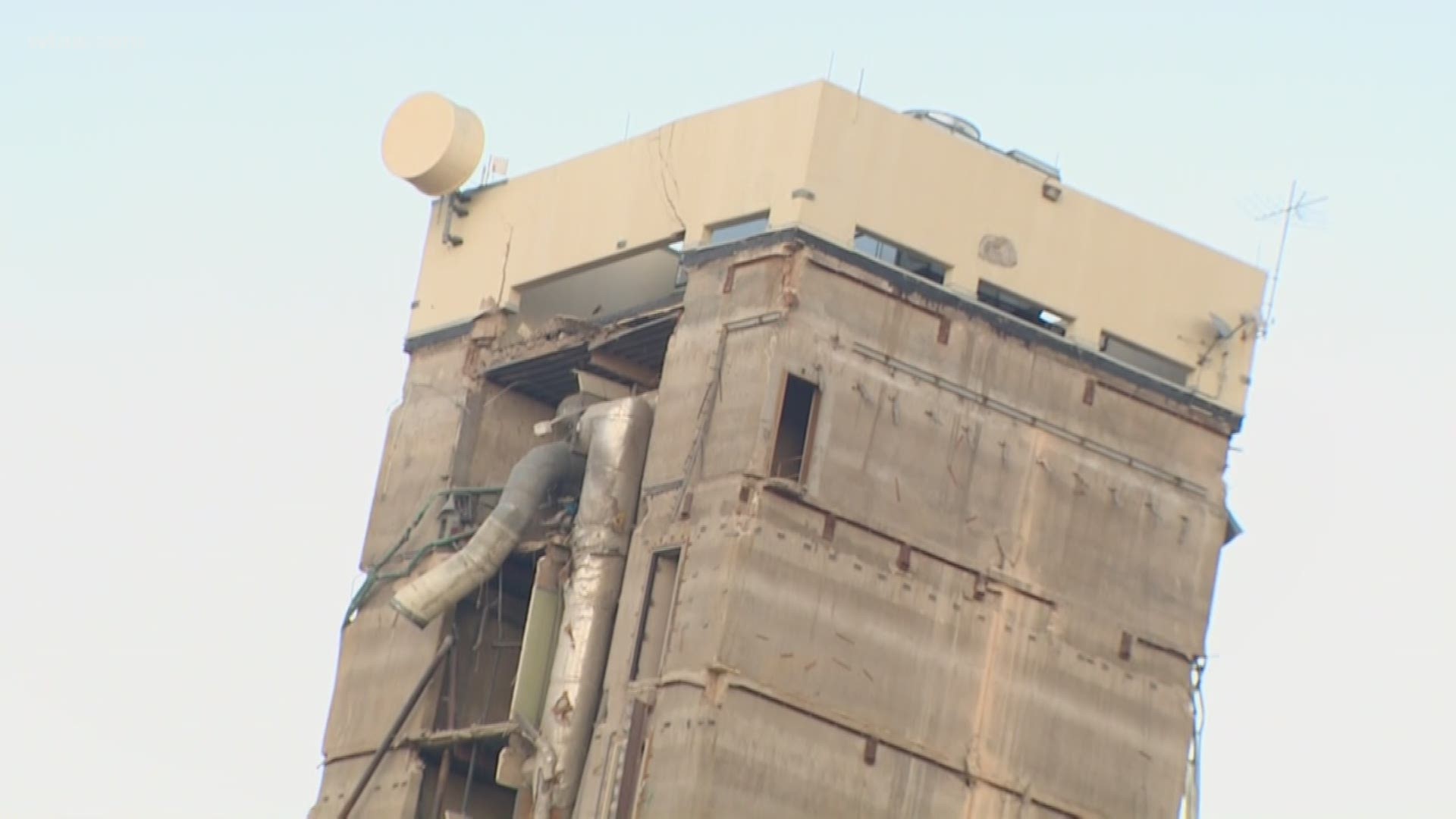 DALLAS — Updated at 9:57 p.m. Sunday with additional information from construction officials and visuals following the implosion.

An 11-story tower was supposed to be demolished Sunday morning in Uptown, but the building located at 2828 North Haskell Avenue did not entirely collapse.

A core shaft was left standing after an initial implosion around 7:45 a.m. that contained the elevator and stairwell shafts, explained Steve Pettigrew, the president of Pettigrew Inc., one of the companies involved in the implosion.

"It was the spine of the building," he said.

Crews were supposed to be able to bring down the last piece of the building manually using conventional methods on Sunday, Pettigrew said during a news conference following the implosion.

"Overall, all the explosions did go off," he said. "That type of construction with the central core and the outer columns, it was precast. They're tough; they're tough obviously. But we have equipment on standby, and they'll get it done today."

But seven hours after it was originally supposed to fall, the core still had not come down.

Lloyd Nabors, the president of Lloyd Nabors Demolition, had reiterated that crews would have it done by the end of the day Sunday.

"We have a high-reach excavator, it's our contingency plan, we'll have it over today," Lloyd Nabors, the president of Lloyd Nabors Demolition, said. "It'll be down safely, so we do have a back-up plan to take it down."

"It's actually leaning in the direction to fall that we intended," he explained. "It's just a large parking lot-- we have a lot of room, so we don't have any safety concerns. We're going to be taking it down from the backside, so we're planning to have it come over in the parking lot, as planned."

Nabors explained that crews would use a cruncher on the end of the high-reach excavator to work down the remaining portion of the building.

They were working on it again by 8:30 a.m. and had expected to complete the work within a few hours. But that was not the case.

He said it wasn't unusual for the core to remain in place following an implosion.

Nabors and Pettigrew both said that the cores can be quite difficult to bring down and it’s not unusual for one to remain in place following an implosion.

"We did a lot of preparation in that core," Pettigrew detailed. "We had over 1,000 lineal feet of saw cuts to kind of, you know, precut and tenderize that core, but when you have 35, 40 feet of vertical drop, [we were] hoping it would telescope a little more, then trip over, but it didn't."

Crews said Sunday they would be back at it again at 7 a.m. Monday to try and bring down the tower.

A spokesperson for De La Vega Development, the company behind all the construction, said the implosion was in preparation for a new development in Dallas called The Central.

Access to the area was limited for pedestrians and drivers for several hours before the event, according to Dallas police.

Traffic on U.S. 75 was stopped for about 30 to 45 minutes before and after the scheduled implosion.

But delays and road closures had ended by 8:30 a.m., construction officials said, with no remaining safety concerns for passerby.

The implosion also caused DART delays and bus detours Sunday. For additional information on how those routes could still be affected, click here.

Sunday night, both Nabors Demolition and De La Vega Development released statements on the failed implosion, saying that efforts to implode the building will continue throughout the week.

“The majority of the building at 2828 N. Haskell was imploded with explosives this morning," the statement from Nabors Demolition starts. "In certain instances, especially in the case of older buildings with all concrete and steel core construction, the building core and elevator shafts require additional demolition measures, and we will proceed with conventional demolition efforts over the course of this coming week.

"The result today was something we anticipated could occur in our original demolition plan. At this time, the remaining structure is safely contained within the job site and poses no threat to any surrounding buildings or pedestrians."

The statement from De La Vega Development compared the resilient elevator shaft to the "built to last" philosophy the company plans to honor in its development of The Central.

"These remaining improvements and debris will be safely removed this week, and we will be well on our way to providing a next-generation development with incredible walkability, activated green spaces and a place for our community to work, live,  connect, and recharge."