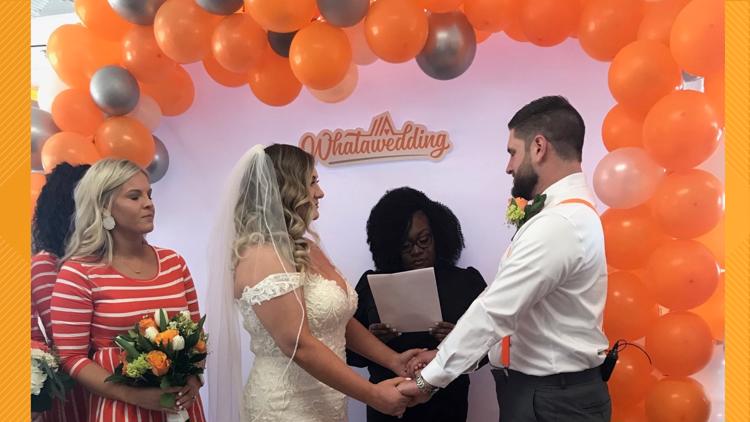 FORT WORTH, Texas — Whataburger, a place close to most Texans' hearts, was transformed Friday into a true chapel of love.

"We've got cake, the flowers, the photos, the music, the whole party," said Whataburger spokeswoman Julie Piel-Lopez. "Today's all about love."

As the lunch crowd lingered on a Friday afternoon, the Whataburger on North Tarrant Parkway ramped up the romance. From "fancy ketchup" hearts hanging from the ceiling to the white linen on the booths, the mood was romantic.

Across the state, 3,000 couples vied for the chance to get married at Whataburger on Valentine's Day. It was the first time Whataburger offered the contest, which included the officiant, Whataburger swag and a James Avery wedding band.

Amy Moss and Xander Leatherwood were one of six winning couples.

"It all became real when I put on the Whataburger bowtie," Leatherwood said.

"I was like oh my gosh—I'm getting married at Whataburger right now," Moss said.

Swapping Valentine's red and pink for Whataburger white and orange, the bridal party and groom gathered and watched as Amy's sons walked her into Whataburger.

It was a ceremony mixed with love and a taste of the Texas tradition.

"I promise to nurture your dreams and to help you reach them," Moss said to Leatherwood during their vows. Then, to a cacophony of laughter, she said, "I promise to always lick the mustard off your sweet and spicy."

The restaurant remained open during the ceremony and unsuspecting customers looked on at all the love.

"By the power of your love and commitment, the power vested in me by the state of Texas, and Whataburger," the officiant said, "I pronounce you husband and wife."

Leatherwood, whose friends call him "Whataburger" because of his lifelong love for the brand, and Moss said their first date ended at Whataburger, and now their marriage begins there.

"I get to celebrate this new love... here at my, well, first love," Leatherwood laughed, along with Moss.

"Every Valentine's Day, we’ll be at a Whataburger," Moss said.