A 74-year-old was looking for someone to play catch with, but instead, he found a team and friendship

"I think it's great," Alice Miller said of the unexpected response. "You know it makes sense during COVID. Everybody's just worn out." 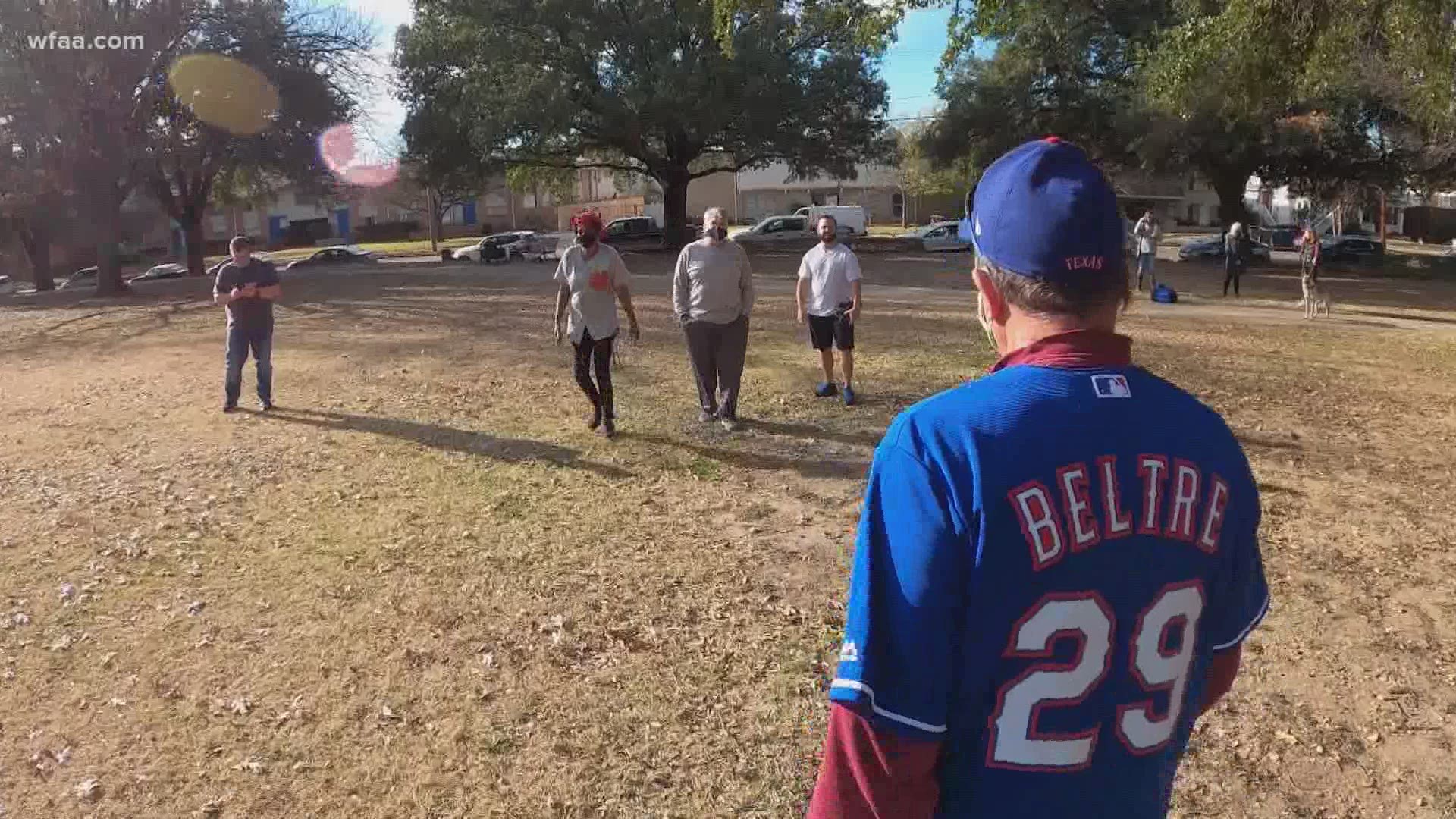 DALLAS — Social media neighborhood apps are designed to keep people connected and to keep people safe. A Dallas couple proved they can also be a good way to find someone to just play catch.

"It's definitely my fault," joked Alice Miller of the household dilemma that started with a Christmas present to her husband Frank.

She thought the former high school and college baseball player would enjoy a best-selling book called "K: - A History of Baseball in Ten Pitches."

He did enjoy it. In retrospect, maybe just a little too much.

"He was walking around the house with a baseball like 24/7. It was crazy," laughed Alice.

The same one as Yankee great Mariano Rivera, Frank pointed out.

"This is how you hold this. This is how you throw. That kind of thing," Alice said of the baseball tutorials her husband was offering around the house. "And I knew he was just itching to get out."

"Now, I'm armed with all of this information from K, I got to put it to use," Frank said with the enthusiasm of a youth reignited.

So, Alice, needing to find her husband a new friend to play catch with, went to the NextDoor app for her Turtle Creek neighborhood. And, on an app normally used to report problems and package thieves, concerns about neighborhood crimes, and to share the occasional restaurant recommendation or recipe, she wrote:

"My 74-year-old husband would like to have a partner to throw the ball with. He is a former high school and college pitcher and is looking for a catcher or someone who knows how to throw a baseball. He is in good shape and loves baseball..."

"I didn't really expect too much to happen," said Frank.

"I thought maybe one person would respond," admitted Alice.

"I was shocked by the amount of the response," said Frank.

Seventy-six responses and comments later, they had enough people to field their own baseball team.

"It's an honor to be here and meet you guys and play catch with you," said Joseph Mendoza, one of three members of the North Dallas High School baseball team who showed up at 3 p.m. Wednesday at Cole Park.

"Brings back my fountain of youth," Dallas resident Rich Nazzarella said, a man of a certain older age himself.

"35 years away," Nazzarella said of his time coaching little league. "It feels like I never left."

Michael Glaser, 34, was also among the two dozen strangers who showed up to play catch with Frank.

"Really good, yeah," Glaser said of Frank's arm. "He made the glove pop."

"I'm loving it," Frank said of his sudden day in the sun again.

For the occasion, Frank wore his Texas Rangers cap and his number 29 Adrian Beltre jersey.

"I think it's great," Alice said. "You know it makes sense during COVID. Everybody's just worn out."

So, with his mask on when he was up close and his mask off when he was at a distance throwing high-heat, Frank and his new group of friends played ball for a solid hour.

But it's also worth noting this was Wednesday, the same day Congress was voting on impeachment.

"I'm flabbergasted that on impeachment day you're interviewing me. And I'm thrilled to be honest," said Frank.

He was thrilled that so many strangers chose to join him in Cole Park.

"And what we should do is have this not be affected by which side of the aisle we're on right? It's just baseball and friendship. It tells me that people are wanting to get out and touch others. That was part of this for me. But mostly it was about working on my new stuff," he said of the Mariano Rivera cutter he was still trying to perfect.

New stuff and new friendships. They exchanged numbers. Their second get together is planned for Saturday.

And Frank may actually get back on the pitcher's mound soon. The Bulldogs of North Dallas High have asked him to throw out the ceremonial first pitch at their first game next month.