With his cancer-surviving son on the sideline, Cedar Hill coach leads football team to state championship

Carlos Lynn was the defensive coordinator for Cedar Hill in 2006 when the team won their first state title. Now, as head coach, the team has a chance to win again. 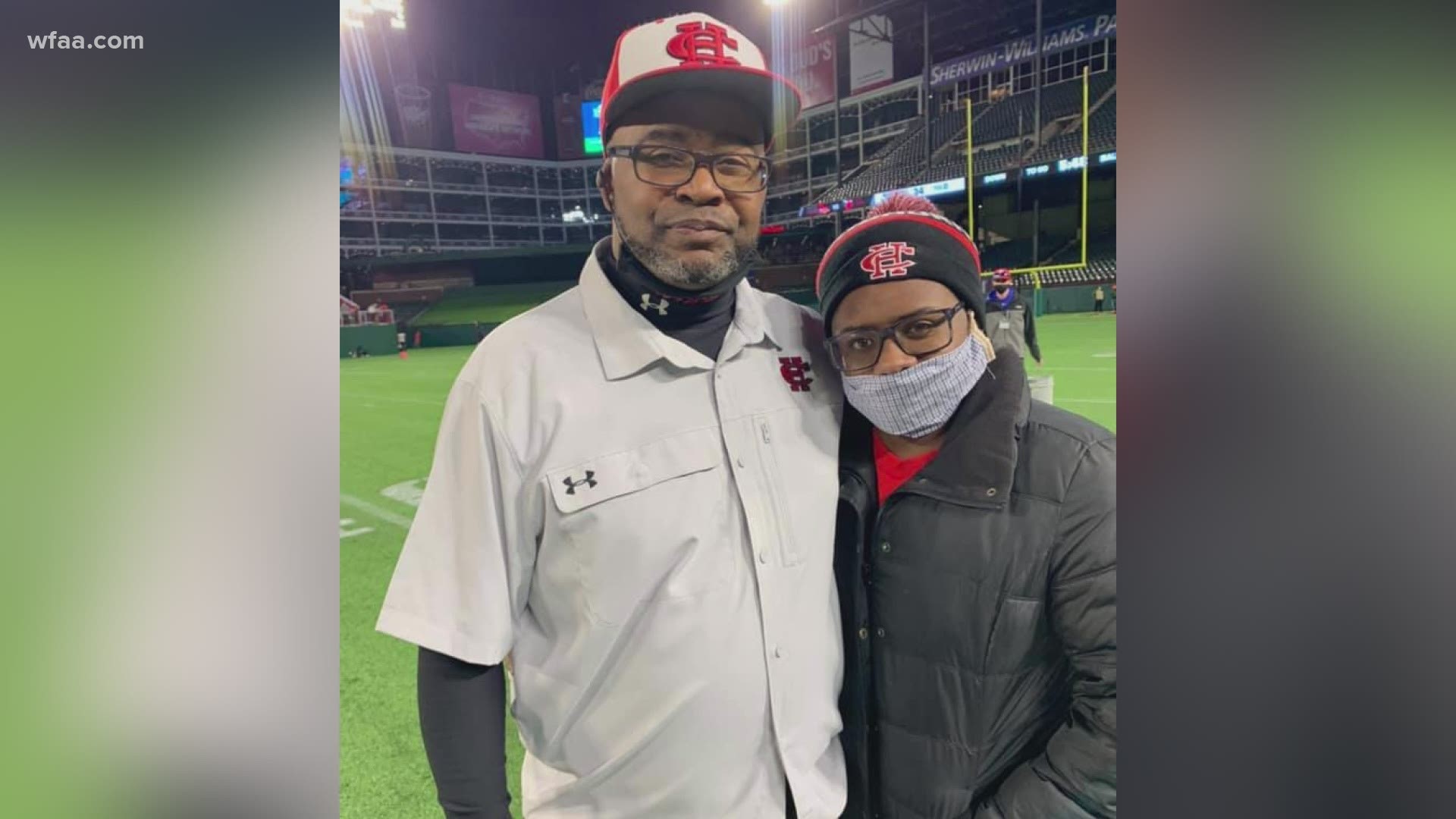 CEDAR HILL, Texas — "You tell your kids, 'It's just another football game.' But, it's big."

Transparency from a head coach just days before his team plays for a state championship? That's sleep deprivation.

It's unusual to have rivalries in the Texas football state finals.

Then again, it's unusual for a team from southwest Dallas County and a dynasty from west Houston to meet four times in the last nine years.

Cedar Hill and Katy met in the state title game three straight years, from 2012 to 2014, with Katy winning the first matchup and The Hill sweeping the next two.

2014 marked the third championship for the Longhorns in nine years, starting with their first in 2006.

"We had never won a playoff game," Carlos recalled.

He was the defensive coordinator for that 2006 team, which not only won the school's first playoff game that year, but went undefeated en route to winning it all.

After getting a shot as a head coach in Arlington, Carlos returned back to Cedar Hill in 2017 as the replacement for legendary Longhorns coach Joey McGuire.

The couple have lived in the Cedar Hill area since 1998. They are a fabric of the football community.

"We're trying to add to the tower," Antwanette explained, referring to the state championship years printed on the Cedar Hill water tower.

It has not been easy, though, especially with the complications of playing a season during the COVID-19 pandemic.

A few coaches on the Cedar Hill coaching staff have underlying conditions for the virus, including Carlos, who has Type 2 diabetes.

The husband and father has had to trust his team of teenage boys to stay the course for pandemic protocols, despite constant concern of "COVID fatigue."

Especially because Carlos is not the only one in his household considered at-risk.

"My son is a two-time cancer survivor," he explained.

Caleb Lynn is a 16-year-old junior at Cedar Hill and the only child of Carlos and Antwanette.

At 8 years old, Caleb was diagnosed with cancer. He received many weeks of chemotherapy treatments before the cancer went into remission.

But in 2017, the same year Carlos was hired by Cedar Hill as head coach, Caleb's cancer returned.

The second battle required a more aggressive approach including chemo, radiation and a 16.5-hour surgery to remove a lemon-sized tumor from the right side of his mouth.

Due to the tumor affecting the facial nerves, Caleb's right side of his face was paralyzed, so the surgeons relocated nerves and fat to the face from other parts of the body.

Caleb has some limited movement in the right side of his face and he cannot hear out of his right ear, but his cognitive skills are strong.

"I'm thankful for every day because beating cancer twice is a really rare feat," Caleb reflected. 'I'm just grateful I got through it, because I know that every day isn't promised."

Caleb has been cancer-free for the last two years and he's become more involved with baseball, football and soon he'll do some powerlifting.

"It's been really good not having so many doctors appointments, and now he goes every six months," Antwanette said. "It's going really good."

Unlike his father's path to coaching football, Caleb's interested in a career in welding.

Until then, he's enjoying life as a teenager.

"Trying to keep him off the Playstation," Carlos joked. "He's gonna have to do some more work to get the PS5."

On Saturday, Caleb will be on the Cedar Hill sideline at AT&T Stadium, while his father eyes his first Texas state championship as a head coach.