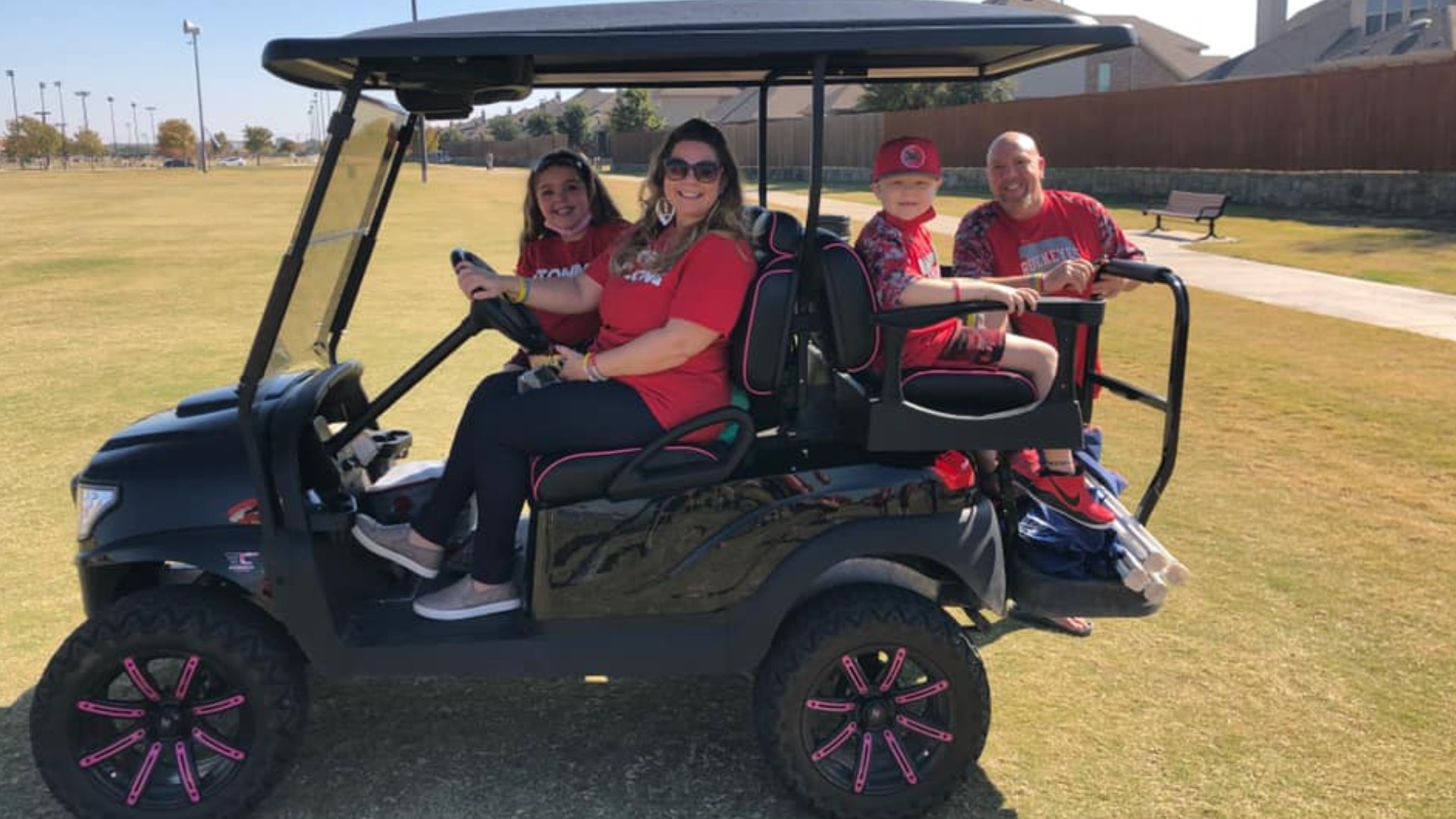 PROSPER, Texas — Tommy Wainwright rang in the New Year from a children's hospital in Dallas.

The 7-year-old boy from Prosper stayed up past his bedtime, while he and his father, Tom, gazed through the windows at the fireworks in the distance.

As the grand finale illuminated the foggy midnight sky, the finality of a torturous year issued renewed hope for the next.

In April 2020— one month into the COVID-19 pandemic— Tom and his wife, Lisa, noticed a tumor on Tommy's back.

What ensued was the first of dozens of doctor appointments over the next nine months, including surgery to remove the tumor.

Tommy was diagnosed with Ewing sarcoma, a rare form of cancer that occurs in the bones and predominantly affects children and young adults.

"You have a great life. Everything is going well. You never think you're going to hear those words: 'Your kid has cancer,'" Tom said recalling the shock of the diagnosis.

Tom and Lisa, along with Tommy and his older sister Charlotte, moved from Ohio to Prosper in 2017 because of Tom's job.

They fit right in.

Akin to native Texans, football runs deep in the hearts of the Wainwright family.

Tom is from Youngstown, Ohio and is a diehard Cleveland Browns fan. Tommy reps the Browns with dad.

Lisa is from Pittsburgh, and is a diehard Steelers fan. Charlotte reps the Steelers with mom.

(You can imagine how raucous the house was on Sunday night when the Browns shocked the Steelers in the NFL Wild Card game, 48-37.)

However, there is one team the whole family supports together: the Ohio State Buckeyes.

As Tommy marched into his battle with cancer, his legion of supporters grew.

They became known as Tommy's Army.

Tommy's message, as he said via Zoom last week, is "To be strong. To be brave. And whatever you're going through, believe in yourself."

Video messages poured in from all corners of the sports world, including U.S. soccer icon Alexi Lalas and Prosper native Tyler Toney, co-founder of Dude Perfect.

Tommy's Army also includes members of the Eleven Warriors, such as former Buckeye cornerback Jeff Okudah. (The Grand Prairie native was selected third overall by the Detroit Lions in the 2020 NFL Draft.)

Dallas Cowboys running back Ezekiel Elliott— an Ohio State legend and 2014 National Champion— posted about Tommy on his Instagram story in November.

Ohio State quarterback Justin Fields— the hero from the Buckeyes College Football Playoff semifinal win over Clemson— replied to a video about Tommy with a heart emoji.

Perhaps most notably, Tommy received words of encouragement from Urban Meyer, the Ohio State football head coach when the Buckeyes won it all in 2015.

Tommy's flag football team, the Prosper Buckeyes, which is normally coached by his father, also made it to the championship game in 2020.

Although Tommy was unable to play this past fall due to his diagnosis, he was there to support his friends and teammates in the title game.

And Tommy's Army was there to support Tommy.

On a Saturday morning in early November, Prosper police cruisers and fire trucks pulled up outside the Wainwright's house as they led a police-fire escort to the game at Frontier Park.

Tommy and his family rode behind them in a golf cart, while friends and neighbors followed in bicycles, refurbished old cars and souped-up Jeeps.

As the Wainwrights arrived the field, they were greeted by rows of applauding families.

Kids, parents and even the little cheerleaders were there to cheer for Tommy.

"It was more than emotional," Lisa admitted. "Just seeing so many people... We told some neighbors to come out. But, you never know."

Tommy served as honorary captain for the championship game and took part in the pregame coin toss, before grabbing a seat in a foldout chair next to Charlotte.

Due to the constant appointments and hospital stays, along with homeschooling and mounting medical bills, a GoFundMe was started in April to help the family.

"Everything this kid has gone through, I cannot fathom," Tom exalted. "And he's just taken it on and not complained."

Cancer is the second-leading cause of death in children ages 1-14, according to the American Cancer Society.

Every year, the federal government spends billions of dollars on cancer research and treatment. However, only 4% of the annual funding is directed towards pediatric cancer.

It's a percentage Tom, Lisa and thousands of parents with cancer warriors and angels hope to see increase considerably.

In addition to raising awareness, the Wainwrights encourage people to make blood donations to help save lives. They know first-hand the impact of giving blood.

"All those people that donated blood— if they didn't do that, Tommy wouldn't be here," Tom admitted.

As a way to give back and say thanks, the Wainwright family, in partnership with cancer-fighting Lexie Bell, have organized a community blood drive for Saturday, Feb. 27, from 9 a.m. to 4 p.m. at the Walmart parking lot in Prosper.

As the echoes of fireworks faded and the streaks of smoke disappeared into the cloudy abyss, Tommy and his father meandered the halls of the children's hospital in the wee hours of New Year's Day.

Tommy hitched his route to hug his nurses, say goodbye and take photos with them.

A few hours after midnight, Tommy underwent his 15th chemotherapy treatment since April.

That evening, he returned home to watch his beloved Ohio State Buckeyes eviscerate Clemson in the College Football Playoff semifinals.

On Monday night, Ohio State marches into Miami to face Alabama in the CFP National Championship.

A few hours before kickoff, Tommy marches back into the hospital where he rang in the New Year.

Only this time, it's to ring the bell.