The Tigers are on a mission to honor their friend with one of the things he wanted most— a state championship. 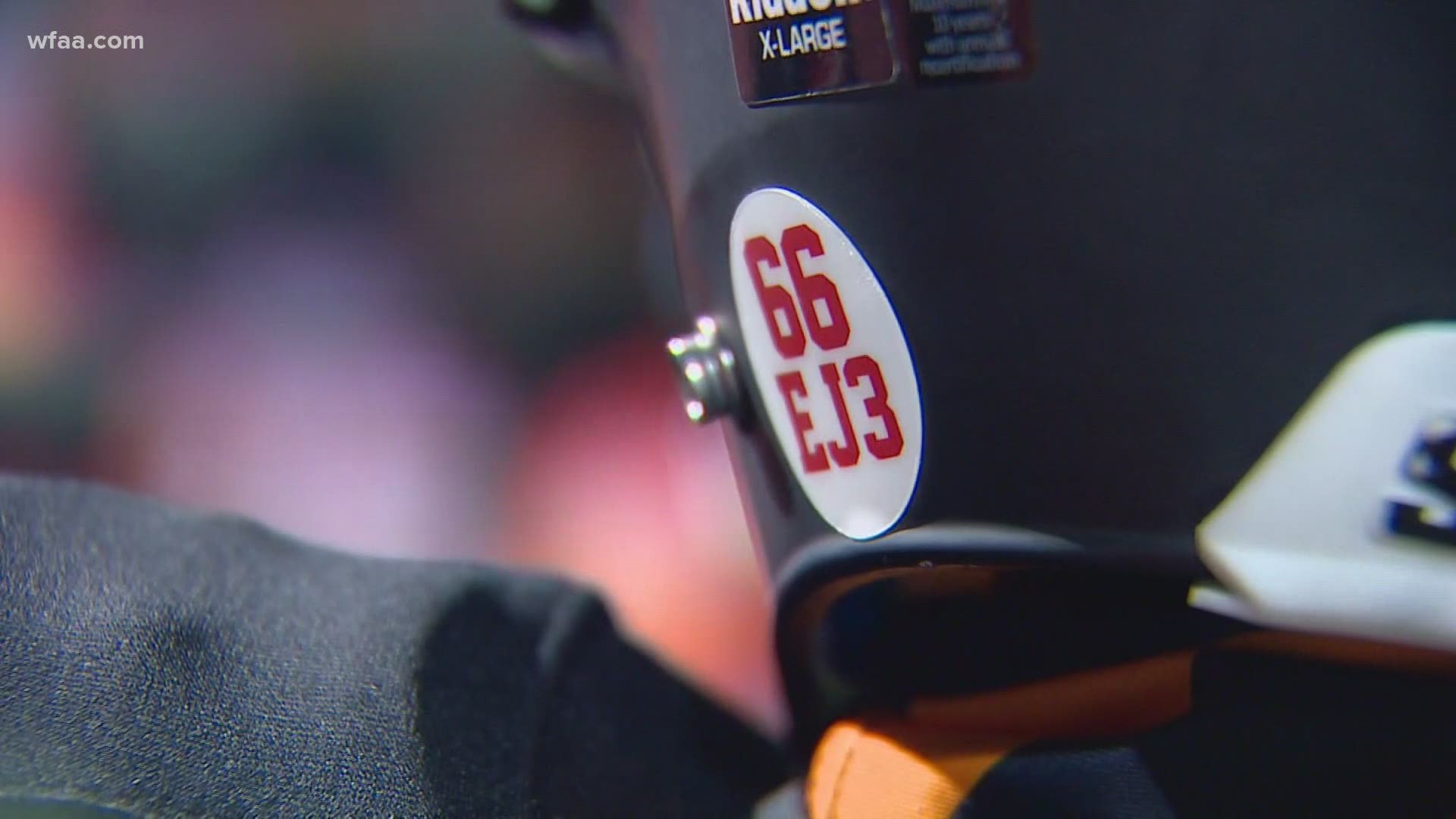 LANCASTER, Texas — Lancaster football is on a mission.

"State," says senior offensive lineman Joseph Amos. "Winning state. We've never done it and we want to do it."

"Big Joe" and the Tigers have big dreams, and their playing is inspired.

"Every day, we're motivated," Amos explained. "We're going to do this for him."

On July 13, Lancaster defensive tackle Edward Jackson III attended a summer workout with his teammates at the high school.

As he was driving back along Pleasant Run in Lancaster, Edward's car collided with another head-on.

Edward died that afternoon. He was 17.

"We don't know why he was taken from us so soon," said Edward's mother Karen. "It's just hard."

Edward— better known as "EJ3"— was a beloved member of the Tigers community.

He played football and baseball for the Tigers, but often spoke with head football coach Chris Gilbert about planning for life after playing sports.

Wearing No. 66, Edward stood out in spite of his 5 foot 3 inch stature.

"Shortest player on the team, but he had the biggest heart," explained Edward's friend and senior defensive lineman Bryant "Paw Paw" Simmons.

Edward had the footwork of a receiver and the weight of a lineman— a rare combination for a young man who was eager to wear the black and orange as a senior.

EJ3 never got to play his senior season.

So, his teammates are playing for him.

When the Tigers run onto the field on game night, Edward's No. 66 jersey is clutched in the hands of receiver Tony Evans— Edward's childhood friend.

As the Jacksons continue to cope with the tragic loss of their son, the team continues to honor their own.

An "In Loving Memory of Edward Jackson, III" poster is prominently displayed by the Tigers entrance to the stadium field. The players tap the poster as they walk onto the field before each game.

On every Lancaster helmet is a decal with "66 EJ3"

Since Edward lost his life, the Lancaster football team has not lost a game.

"They're playing their butts off for him, every time they're on that field," Karen asserted.

Lancaster (9-0) completed an undefeated regular season, followed by a 29-6 win over Frisco Wakeland in the first round of the Class 5A Division I playoffs.

As the Tigers received trophies for their last two victories— including a district championship— they chanted "E-J-3" before placing the trophies in Edward's decorated locker.

"They took the trophy in the locker room and said, 'Coach, we're going to keep the trophy in here.' I said, 'Alright. That's a good place for it,'" Gilbert recalled. "Our goal is to put a few more in there."

The goal. The dream. The mission.