A Dallas firefighter has tested positive for COVID-19, is "doing well" and is in quarantine for 14 days, according to a memo from Dallas Fire-Rescue obtained by WFAA 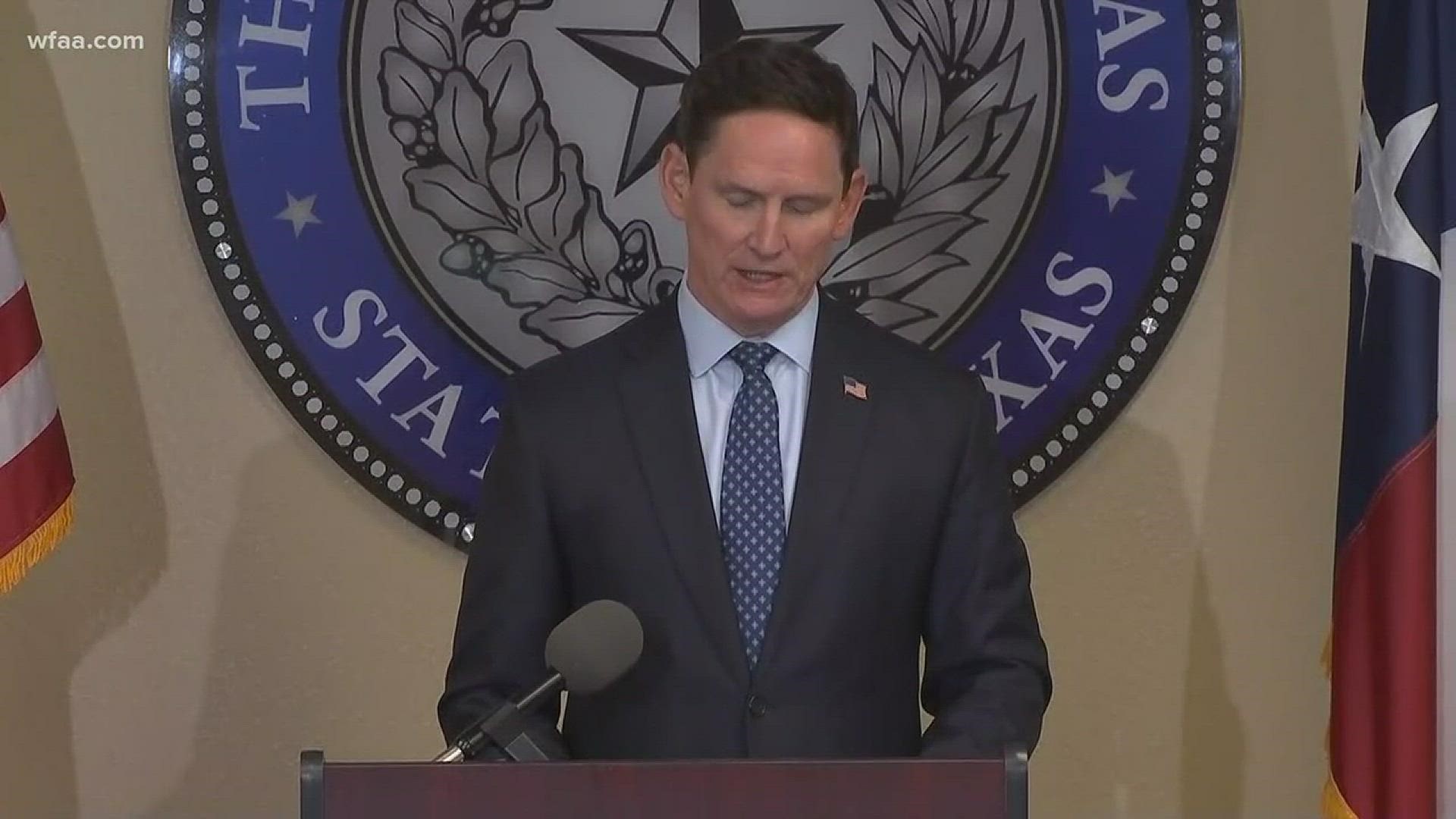 With more than 200 positive cases of COVID-19 reported in North Texas so far, that number is expected only to increase as more testing centers open to the public and more are able to get tested.

A second drive-thru testing center opened on Sunday at the Ellis Davis Field House in Dallas to help meet the large demand for tests. The American Airlines Center is the first location to open in Dallas and began serving the public earlier in the week.

Both testing centers will be open from 8 a.m. to 8 p.m. each day, but there are some requirements a person must meet before they can get tested.

A Dallas firefighter has tested positive for COVID-19, is "doing well" and is in quarantine for 14 days, according to a memo from Dallas Fire-Rescue obtained by WFAA Sunday. This is the first member of DFR to test positive, according to the memo.

All nine members of the crew that were on duty and worked at the station with the firefighter have been taken off duty and placed in isolation for 14 days. They are also "all doing fine," according to the news release.

The order will go into effect at 11:59 p.m. Monday night and will stay in effect until at least 11:59 p.m. on April 3. Jenkins said April 3 is when his current authority expires hence the deadline, but he expects that authority to be extended.

The order comes hours after Gov. Greg Abbott said he would not implement a statewide "shelter-in-place" order, but would instead leave it up to local authorities to make that decision.

Jenkins also said in addition to the Dallas County COVID-19 death this morning, another patient "has died in the last few hours." This brings the county's total COVID-19 death count to three.

In the new order, residents are ordered to "stay safe, stay at home" in their places of residence. Residences include hotels, motels, shared rentals and similar facilities.

Read the full order below: 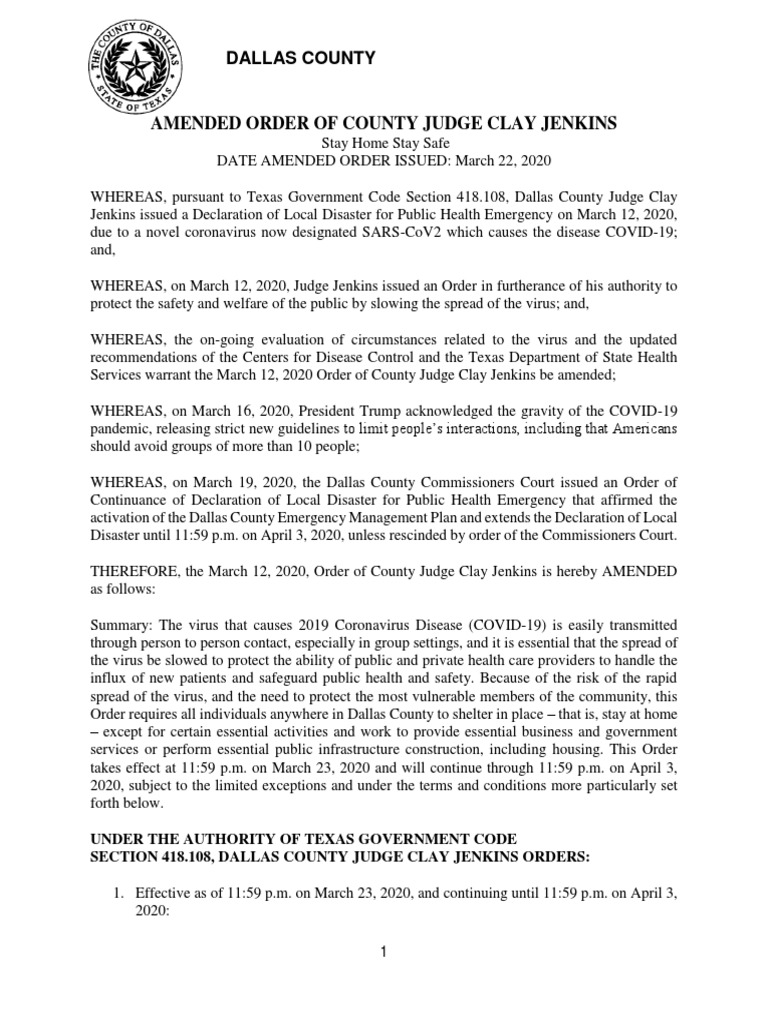 Texas Gov. Greg Abbott announced in a news conference Sunday he would be waiving all nursing restrictions in the state to allow retired nurses, certain nurses in their final year of nursing school, and nurses with inactive licenses to practice medicine, in order to combat the nursing shortage during the COVID-19 epidemic.

This executive order, in effect Sunday, will also fast-track licenses for out-of-state medical professionals and will require all hospitals in the state to suspend all non-essential surgeries and procedures to focus on treating patients with COVID-19.

Abbott also allowed hospitals to treat more than one patient in a room as a way to consolidate space. Abbott said health care professionals at some hospitals have told him that these actions could free up to 50% of their beds for coronavirus patients.

Abbott also said that a shelter-in-place order for the entire state is not happening now, and he is reluctant to do so because there are still hundreds of counties without positive COVID-19 test results, but he would "remain flexible."

"We need to see the overall effectiveness of that," Abbott said, when asked about issuing a shelter-in-place order.

"What may be right for places like larger areas [Dallas, Houston and Austin] may not be right in this point in time for those smaller areas," he said. "Local officials have full authority at the local level to implement stricter standards. I applaud them for doing so but at this time it is not the proper approach to mandate that for everyone in the state.

"I will always remain flexible and on a moment's notice, we will take whatever strategies at a statewide level to combat COVID-19."

Additionally, Abbott established a task force to help with the production of personal protective equipment (PPEs) for healthcare professionals and first responders. More medical sites will be established as needed, and Abbott said the state has money to pay for testing equipment, but the materials just aren't here.

"We've been asking the federal government to accelerate the supply of resources from the government," Abbott said. "Right now the delivery dates for the equipment is in July, and that's not going to work. We need it tomorrow."

At the end of the news conference, Abbott urged any federal partner who could help with the production of PPE or other materials to step up immediately.

"We have ready money to pay for anyone who can sell PPE to us, we'll cut you a check on the spot," Abbott said.

Another person has died in Dallas County

The person was a man in his 80s who did not have any other high-risk chronic health conditions, officials said. He had been critically ill at an area-hospital.

The county also reported an additional 36 cases Sunday, bringing the total to 131 cases in Dallas County, with another four positive results having been reported locally for people who do not live in the county.

More than 40% of patients who have been hospitalized are older than 60, county officials said.

“It is our policy in Dallas County not to release the names of person who have died from COVID-19.  We leave that to the decisions of their families and loved ones. My thoughts and prayers are with this family and with all of the persons who have been suffering from COVID-19,” said Dallas County Judge Clay Jenkins. “Dallas County will do everything in their power to #flattenthecurve and give you and your family their best chance to stay safe.”

Health officials did not provide any additional details on the new cases.

North Texas has crossed a new threshold in the COVID-19 pandemic, with more than 200 cases now reported across the area.

At least four people who have had the disease have died, county health officials have said.

At last count, Dallas County has had 134 reported cases of the disease. Tarrant County announced Sunday it has seen 47 cases, with two recoveries. In Collin County, 31 people have so far tested positive, and eight have recovered.

The number of cases in Tarrant County jumped from 29 positive cases Friday to 47 on Sunday, a 62% increase.

Of those 47, 44 are active cases, 2 people have recovered and one person who had the disease has died, according to health officials.

The death occurred in Arlington, where there are 11 active cases at this time.

One person in Benbrook has recovered, county health officials said. Someone in White Settlement is the other to have recovered since contracting the virus.

There are 14 active cases of the disease in Fort Worth, four in Mansfield and three in Southlake. There are two each in Colleyville, Euless, Lakeside and North Richland Hills. Grand Prairie, Grapevine, Keller and Watauga each have one case, according to the county.

Health officials across the country had widely cautioned that numbers will continue to spike as more testing becomes available.

Eight have recovered in Collin County

Another person has successfully recovered from COVID-19 since the outbreak began in Collin County, bringing the total of recovered patients to eight, health officials announced Sunday.

One person who died last week had the disease, county officials said. Two people remain hospitalized and 20 are now in self-isolation.

Two additional people are under monitoring from the country, increasing the number from 73 on Saturday to 75 on Sunday.

The second COVID-19 testing site in Dallas has opened.

The location is at Ellis Davis Field House at 9191 S. Polk St. in Dallas. It will be open from 8 a.m. to 8 p.m. daily alongside the downtown Dallas site at the American Airlines Center.

“The drive-through approach is to allow a safe, structured means to perform testing while maintaining separation,” Randall Payton, the incident commander for the testing sites, said in a news release. “Measures have been taken to protect the safety and health of the individuals participating and staff conducting the tests.”

To be tested, city officials say a patient must have a temperature of 99.6 or higher and:

Anyone who does not meet the above criteria won't be tested at the sites and is asked to instead contact their healthcare provider.